"A young cellist whose emotionally resonant performances of both traditional and contemporary music have earned her international recognition, … Weilerstein is a consummate performer, combining technical precision with impassioned musicianship." So stated the MacArthur Foundation when awarding Alisa Weilerstein a 2011 MacArthur "genius grant" Fellowship, prompting the New York Times to respond: "Any fellowship that recognizes the vibrancy of an idealistic musician like Ms. Weilerstein … deserves a salute from everyone in classical music." In performances marked by intensity, sensitivity, and a wholehearted immersion in each of the works she interprets, the American cellist has long proven herself to be in possession of a distinctive musical voice. As the Los Angeles Times explains, "Weilerstein's cello is her id. She doesn't give the impression that making music involves will at all. She and the cello seem simply to be one and the same." An exclusive recording artist for Decca Classics since 2010, Weilerstein is the first cellist to be signed by the prestigious label in more than 30 years.

For her first album on the Decca label, Weilerstein recorded the Elgar and Elliott Carter cello concertos with Daniel Barenboim and the Staatskapelle Berlin. The disc was named "Recording of the Year 2013" by both Norman Lebrecht andBBC Music magazine, which featured the cellist on the cover of its May 2014 issue. On her second Decca disc, released in early 2014, Weilerstein undertook Dvorák's Cello Concerto with Jirí Belohlávek and the Czech Philharmonic, in a performance distinguished, as the New York Times noted, by a "take-no-prisoners emotional investment that is evident in every bar."

This season, having already "met Dudamel, rapture for rapture" (Los Angeles Times) at the Los Angeles Philharmonic, and revealed "intensity, tonal beauty, and emotional depth" (New York Times) at the New York Philharmonic, Weilerstein looks forward to giving the New York premiere of Matthias Pintscher's Reflections on Narcissus under the composer's own direction during the New York Philharmonic's inaugural Biennial. She also collaborates on Prokofiev's Sinfonia Concertante with Jaap van Zweden and the Chicago Symphony, and on Elgar with Peter Oundjian and the Toronto Symphony; makes her debut with the Japan Century Symphony Orchestra; returns to London's Royal Festival Hall with Kirill Karabits and the Bournemouth Symphony; tours Europe playing Schumann with the Mannheim Symphony Orchestra and Mozarteum Orchestra; and reprises Dvorák's concerto with Belohlávek and the Czech Philharmonic on a European tour that includes a return to London's BBC Proms. Besides serving as artist-in-residence with the Cincinnati Symphony, she has engagements with the Boston, Dallas, Houston, San Francisco, and New Zealand symphonies, and with the Israel Philharmonic. In recital, she appears at London's Wigmore Hall on a European tour with pianist Inon Barnatan, at Sydney Opera House and Melbourne Recital Centre, at the Aspen Music Festival, and at the Caramoor International Music Festival, where she serves as 2014 artist-in-residence. Summer also sees the release of the feature film If I Stay, in which the cellist makes a cameo appearance as herself alongside award-winning actress Chloë Grace Moretz.

To launch the 2014-15 season, Weilerstein will join the Milwaukee Symphony and Edo de Waart for the Elgar concerto, which is also the vehicle for upcoming engagements with the Cleveland Orchestra, Dallas Symphony, London's Philharmonia Orchestra, the Stuttgart Symphony, the Netherlands Philharmonic, and Tokyo's NHK Symphony. She plays Dvorák with the New York Philharmonic and Christoph von Dohnányi; Haydn on a German tour with the Australian Chamber Orchestra; and Shostakovich with England's Hallé Orchestra, the Warsaw Philharmonic, and the Orchestra of St. Luke's at Carnegie Hall. Other orchestral collaborations include dates with the Orchestre de Paris, Zurich's Tonhalle Orchestra, Berlin's Konzerthausorchester, the Montreal Symphony, the Czech Philharmonic, Denmark's Aalborg Symphony, Spain's Orquesta de Valencia, and the Luxembourg Philharmonic. Next season's recital highlights include appearances in Boston, Aspen, and the Wigmore Hall, where Weilerstein will showcase repertoire from Solo, her compilation of unaccompanied 20th-century cello music, which is due for U.S. release by Decca in late 2014. The album's centerpiece will be Kodály's Sonata for solo cello, a signature work in which the cellist has impressed the New York Times with her "staggering performance."

A major career milestone for Weilerstein took place when she played the Elgar concerto with the Berlin Philharmonic and Daniel Barenboim in Oxford, England, for the orchestra's 2010 European Concert. Televised live to an audience of millions worldwide, the concert was subsequently released on DVD by EuroArts; the New York Times called the cellist's performance "incandescent," while The Guardian's Tom Service declared it "the most technically complete and emotionally devastating performance of Elgar's Cello Concerto that I have ever heard live." She and Barenboim reunited last season to play Elliott Carter's concerto on a German tour with the Berlin Staatskapelle. In 2009, Weilerstein was one of four artists invited by Michelle Obama to participate in a widely celebrated and high profile classical music event at the White House, featuring student workshops hosted by the First Lady and performances before guests including President Obama and the First Family. A month later, Weilerstein toured Venezuela as soloist with the Simón Bolívar Symphony Orchestra under Gustavo Dudamel. She has since made numerous return visits to teach and perform with the orchestra as part of its famed El Sistema music education program. Other highlights of recent seasons include the cellist's debuts at the BBC Proms in 2010, when she played Shostakovich with the Minnesota Orchestra and Osmo Vänskä, and with England's Academy of St. Martin-in-the-Fields, which she joined in 2013 for a 16-city U.S. tour.

Committed to expanding the cello repertoire, Weilerstein is an ardent champion of new music. She has worked extensively with Osvaldo Golijov, who rewrote Azul for cello and orchestra (originally premiered by Yo-Yo Ma) for her New York premiere performance at the opening of the 2007 Mostly Mozart Festival. Weilerstein has since played the work with orchestras around the world, besides frequently programming the Argentinean composer's Omaramor for solo cello. At the 2008 Caramoor festival, Weilerstein gave the world premiere of Lera Auerbach's 24 Preludes for Violoncello and Piano with the composer at the keyboard, and the two have subsequently reprised the work at the Schleswig-Holstein Festival, the Kennedy Center, and for San Francisco Performances. Joseph Hallman, a 2014 Grammy Award nominee, has also written multiple works for Weilerstein, including a cello concerto that she premiered with the St. Petersburg Philharmonic in 2008.

Weilerstein has appeared at major music festivals throughout the world, including Aspen, Bad Kissingen, Delft, Edinburgh, Jerusalem Chamber Music, La Jolla SummerFest, Mostly Mozart, Salzburg, Schleswig-Holstein, Tanglewood, and Verbier. In addition to her appearances as a soloist and recitalist, Weilerstein performs regularly as a chamber musician. She has been part of a core group of musicians at the Spoleto Festival USA for the past eight years and also performs with her parents, Donald and Vivian Hornik Weilerstein, as the Weilerstein Trio, the trio-in-residence at Boston's New England Conservatory.

The cellist is the winner of both Lincoln Center's 2008 Martin E. Segal prize for exceptional achievement and the 2006 Leonard Bernstein Award. She received an Avery Fisher Career Grant in 2000 and was selected for two prestigious young artists programs in the 2000-01 season: the ECHO (European Concert Hall Organization) "Rising Stars" recital series and the Chamber Music Society of Lincoln Center's Chamber Music Society Two.

Born in 1982, Weilerstein discovered her love for the cello at just two and a half, when her grandmother assembled a makeshift set of instruments from cereal boxes to entertain her while she was ill with chicken pox. Although immediately drawn to the Rice Krispies box cello, Weilerstein soon grew frustrated that it didn't produce any sound. After persuading her parents to buy her a real cello at the age of four, she developed a natural affinity for the instrument and gave her first public performance six months later. At 13, in October 1995, she played Tchaikovsky's "Rococo" Variations for her Cleveland Orchestra debut, and in March 1997 she made her first Carnegie Hall appearance with the New York Youth Symphony. A graduate of the Young Artist Program at the Cleveland Institute of Music, where she studied with Richard Weiss, the cellist also graduated in May 2004 with a degree in History from Columbia University. In November 2008, Weilerstein, who was diagnosed with type 1 diabetes when she was nine, became a Celebrity Advocate for the Juvenile Diabetes Research Foundation.

Celebrated for the unique approach, probing intellect, and consummate artistry he brings to a broad range of repertoire, Israeli pianist Inon Barnatan currently serves as the first Artist-in-Association of the New York Philharmonic. This unprecedented three-season appointment sees him appear as soloist in subscription concerts, take part in regular chamber performances, and act as ambassador for the orchestra.

"a complete artist: a wonderful pianist, a probing intellect, passionately committed, and a capable contemporary-music pianist as well."

In 2015-16, Barnatan embarks on his second season with the Philharmonic, playing Mozart with Jaap van Zweden, Beethoven under Music Director Alan Gilbert, and Saint-Saëns on New Year's Eve. Other upcoming highlights include his Disney Hall debut with the Los Angeles Philharmonic and Gustavo Dudamel, and a U.S. tour with the San Francisco Symphony and Michael Tilson Thomas, featuring dates at the Kennedy Center and Carnegie Hall.

Awarded the Avery Fisher Career Grant in 2009, Barnatan has performed extensively with many of the world's foremost orchestras, including those of Cleveland, Los Angeles, New York, Philadelphia, and San Francisco; the Academy of St. Martin in the Fields; Deutsches Symphonie-Orchester Berlin; Orchestre de la Suisse Romande; and the Jerusalem and Shanghai Symphony Orchestras. He has worked with such distinguished conductors as Roberto Abbado, James Gaffigan, Matthias Pintscher, David Robertson, Edo De Waart, and Pinchas Zukerman. Passionate about contemporary music, last season the pianist premiered new pieces composed for him by Pintscher and Sebastian Currier. "A born Schubertian" (Gramophone), Barnatan's critically acclaimed discography includes Avie and Bridge recordings of the Austrian composer's solo piano works, as well as Darknesse Visible, which scored a coveted place on the New York Times' "Best of 2012" list. His Chopin and Rachmaninoff duo sonatas album, recorded with cellist Alisa Weilerstein, will be released by Decca Classics next season. 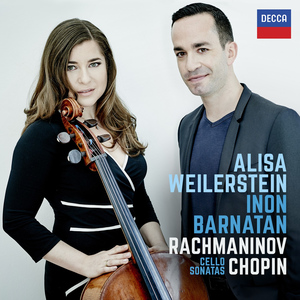 Pianist Inon Barnatan and cellist Alisa Weilerstein, longtime and exclusive recital partners who "play with a dazzling technique and a level of communication and expression so clear that they can practically finish each other's phrases" (Boston Classical Review), release their first album together on Decca on October 2. Theychose for this first recording the Chopin and Rachmaninov cello sonatas – each a monumental work for both instruments – which they have been exploring together in concert for years, as well as shorter works by each composer. Following the release of the album will be a six-country tour in November, in venues ranging from London's Wigmore Hall to the Cemal Resit Rey Concert Hall in Istanbul, with further stops in Paris, Brussels, Copenhagen and Bonn. In early February they reunite in the U.S. for two more appearances: in Fort Worth and at Stanford's Bing Concert Hall.