American cellist Alisa Weilerstein has attracted widespread attention worldwide for playing that combines a natural virtuosic command and technical precision with impassioned musicianship.  The intensity of her playing has regularly been lauded, as has the spontaneity and sensitivity of her interpretations. Following her 2013 performance with the Los Angeles Chamber Orchestra, the Los Angeles Times said, "Weilerstein's cello is her id. She doesn't give the impression that making music involves will at all. She and the cello seem simply to be one and the same." In September 2011 she was named a MacArthur Foundation Fellow and in 2010 she became an exclusive recording artist for Decca Classics, the first cellist to be signed by the prestigious label in over 30 years.

Ms. Weilerstein's debut album with Decca, released in the United States in November 2012, features performances of the Elgar Cello Concerto in E minor and the Elliott Carter Cello Concerto with conductor Daniel Barenboim and the Staatskapelle Berlin. The collaboration was described by The New York Times: "Their interpretation is one of poise, heft and ardor, the soloist's superb control keenly matched by the conductor's insightful support." For her second album on the Decca label, to be released worldwide in early 2014, Ms. Weilerstein will record the Dvorak cello concerto with conductor Jiří Bělohlávek and the Czech Philharmonic.

Ms. Weilerstein's 2013-14 season includes engagements across Europe and the United States. In several return engagements she performed the Elgar cello concerto with Peter Oundjian and the Toronto Symphony; she played with cellists Carter Brey and Daniel Mueller-Schott in a concert of Penderecki's Concerto Grosso with the New York Philharmonic; and she will return to Chicago to perform Prokofiev's cello concerto with Jaap van Zweden and the Chicago Symphony. She will also perform the Tchaikovsky Rococo Variations with Gustavo Dudamel and the Los Angeles Philharmonic in February, and make her debuts with Orchestra Mozart in Italy and the Osaka Philharmonic in Japan. Ms. Weilerstein is artist-in-residence with the Cincinnati Symphony Orchestra this season, and has engagements with the Boston, Cincinnati, Dallas, Houston, and San Francisco symphonies and the Israel Philharmonic. She will return to the Southbank Center in London to perform with Kirill Karabits and the Bournemouth Symphony Orchestra, and to the Concertgebouw in Amsterdam to perform with James Gaffigan and the Netherlands Radio Philharmonic Orchestra. She will also give a recital at London's Wigmore Hall in December as part of a European tour with pianist Inon Barnatan.

Highlights of the 2012-13 season included Ms. Weilerstein's tour to Germany to perform the Elliott Carter Cello Concerto with Daniel Barenboim and the Berlin Staatskapelle. She appeared with conductor Gianandrea Noseda and the Philadelphia Orchestra, made her debut with conductor Lionel Bringuier and the Atlanta Symphony, and performed at the Kennedy Center with conductor Christoph Eschenbach and the National Symphony Orchestra. In January 2013 Ms. Weilerstein toured Europe with pianist Inon Barnatan, visiting Germany, Spain and the Netherlands. Ms. Weilerstein also made her debut with the Academy of St. Martin in the Fields in March for a 16-city United States tour.

A major milestone in Ms. Weilerstein's career took place in May 2010 when she performed Elgar's Cello Concerto with the Berliner Philharmoniker and Daniel Barenboim in Oxford, England for the orchestra's 2010 European Concert.  This concert was televised live to an audience of millions worldwide and also released on DVD by EuroArts. This performance, which followed her Berliner Philharmoniker debut with Mr. Barenboim days earlier, was described by Tom Service of The Guardian as "…the most technically complete and emotionally devastating performance of Elgar's Cello Concerto that I have ever heard live…".

In August 2010 she made her BBC Proms debut with the Minnesota Orchestra and Osmo Vänskä performing Shostakovich's Cello Concerto No. 1.  She subsequently performed this work on a 15-city U.S. tour with the St. Petersburg Philharmonic led by Yuri Temirkanov and Nikolai Alexeev in 2011 that included appearances in Walt Disney Concert Hall, Davies Symphony Hall, Boston's Symphony Hall, Chicago's Orchestra Hall and Carnegie Hall.

In  2009, Ms. Weilerstein was one of four artists invited by the First Lady, Michelle Obama, to participate in a widely-applauded and high profile classical music event at the White House that included student workshops hosted by the First Lady, and playing for guests including President Obama and the First Family.  A month later she was the soloist on a tour of Venezuela with the Simón Bolívar Symphony Orchestra, led by Gustavo Dudamel. She has subsequently made numerous return visits to Venezuela to teach and perform with the orchestra as part of its famed El Sistema program of music education.

Committed to expanding the cello repertoire, Ms. Weilerstein is a fervent champion of new music.  She has performed Osvaldo Golijov'sAzul for cello and orchestra around the world.  This piece, originally premiered by Yo-Yo Ma, was rewritten for Ms. Weilerstein for the New York premiere at the opening night of the 2007 Mostly Mozart Festival.  She also frequently performs Mr. Golijov's Omaramor for solo cello.  In 2008 she gave the world premiere of Lera Auerbach's 24 Preludes for Violoncello  and Piano with Ms. Auerbach at the Caramoor International Music Festival.  The duo has subsequently performed this work, juxtaposing it with Shostakovich's 24 Preludes for Piano arranged for cello and piano by Ms. Auerbach, at the Schleswig-Holstein Festival, the Kennedy Center and for San Francisco Performances.

Ms. Weilerstein has appeared at major music festivals throughout the world, including Aspen, Bad Kissengen, Delft, Edinburgh, Jerusalem Chamber Music Festival, La Jolla Summerfest, Mostly Mozart, Schleswig-Holstein, Tanglewood and Verbier.  In addition to her appearances as a soloist and recitalist, Ms. Weilerstein performs regularly as a chamber musician.  She has been part of a core group of musicians at the Spoleto Festival USA for the past eight years and she also performs with her parents, Donald and Vivian Hornik Weilerstein, as the Weilerstein Trio, which is the Trio-in-Residence at the New England Conservatory in Boston.

In 2008 Ms. Weilerstein was awarded Lincoln Center's Martin E. Segal prize for exceptional achievement and she was named the winner of the 2006 Leonard Bernstein Award.  She received an Avery Fisher Career Grant in 2000 and was selected for two prestigious young artists programs in 2000-01; the ECHO (European Concert Hall Organization) "Rising Stars" recital series and the Chamber Music Society of Lincoln Center's Chamber Music Society Two.

Ms. Weilerstein's love for the cello began when she was just two-and-a-half after her grandmother assembled a makeshift set of instruments out of cereal boxes to entertain her when she was ill with the chicken pox.  Ms. Weilerstein, who was born in 1982, was instantly drawn to the Rice Krispies box cello but soon grew frustrated that it didn't make a sound. After convincing her parents to buy her a real cello when she was four, she showed a natural affinity for the instrument and performed her first public concert six months later. Her Cleveland Orchestra debut was in October 1995, at age 13, playing the Tchaikovsky "Rococo" Variations. She made her Carnegie Hall debut with the New York Youth Symphony in March 1997.  Ms. Weilerstein is a graduate of the Young Artist Program at the Cleveland Institute of Music, where she studied with Richard Weiss.  In May 2004, she graduated from Columbia University in New York with a degree in Russian History.  In November 2008 Ms. Weilerstein, who was diagnosed with type 1 diabetes when she was nine, became a Celebrity Advocate for the Juvenile Diabetes Research Foundation. 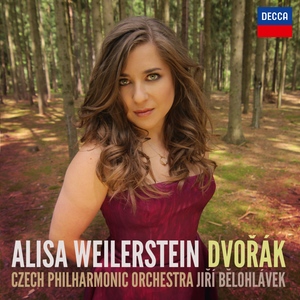 American cellist Alisa Weilerstein's new recording for Decca/Universal Music Classics will feature the music of Antonín Dvořák, and will be released in North America on January 28, 2014. The album explores works created during the time Dvořák spent in the United States, and will feature his Cello Concerto in B minor and Silent Woods, both recorded with Jiří Bělohlávek and the Czech Philharmonic. Also included on the album are arrangements of "Song to the Moon" from Rusalka, and the song Goin' Home, written by one of Dvořák's pupils and based on the melody from the Largo movement of his "New World" Symphony. "Song to the Moon" and Goin' Home were recorded in New York City at the American Academy of Arts and Letters with Russian pianist Anna Polonsky.