Andris Nelsons is Music Director of the Boston Symphony Orchestra and Gewandhauskapellmeister of the Gewandhausorchester Leipzig. These two positions, in addition to his leadership of a pioneering alliance between both institutions, have firmly established Grammy Award-winning Nelsons as one of the most renowned and innovative conductors on the international scene today.

Andris Nelsons conducted with concise focus and vigor and elicited the orchestra both tonal beauty and technical precision and visible enthusiasm. - The Boston Globe

Nelsons began his tenure as Music Director of the Boston Symphony Orchestra in the 2014/15 season. This season, the BSO and Nelsons embark on a major tour throughout Asia, giving their first concerts together in Seoul, Taipei, Hong Kong and Shanghai. The orchestra also continues its appearances at Carnegie Hall as part of the Great American Orchestras series, with a special concert performance of Act III of Wagner's Tristan und Isolde featuring Jonas Kaufmann. Since his appointment as Gewandhauskapellmeister in Leipzig in February 2018, Nelsons and the Gewandhausorchester have completed a number of successful tours, including their first Asia tour together in May/June 2019, performing in Japan and China. This season, the orchestra looks forward to two European tours, which will include performances at the BBC Proms, the festivals in Salzburg and Lucerne, as well as Vienna's prestigious Musikverein, October/November 2019 marks the special highlight for Nelsons, the Boston Symphony Orchestra and the Gewandhausorchester: three joint performances in Boston will be given as part of the alliance between the two orchestras, and the Gewandhausorchester will perform additional concerts as part of BSO's subscription series.

Nelsons leaned forward into the sound, sculpting the music with surpassing tenderness. - The Boston Globe

During the 2019/20 season, Nelsons continues his regular collaborations with the Wiener Philharmoniker, with whom he conducts the prestigious New Year's Day concert in 2020, broadcast to millions across the world. Furthermore, in celebration of the composer's 250th anniversary, the Wiener Philharmoniker and Nelsons present a cycle of Beethoven's symphonies at the Musikverein and on tour at the Philharmonie de Paris, Philharmonie am Gasteig in Munich, and Hamburg's Elbphilharmonie. Throughout his career, Nelsons has established regular collaborations with the Berliner Philharmoniker, Symphonieorchester des Bayerischen Rundfunks, Royal Concertgebouw Orchestra and has been a regular guest at the Bayreuther Festspiele and at the Royal Opera House in Covent Garden.

Andris Nelsons has an exclusive recording relationship with Deutsche Grammophon, which has paved the way for three landmark projects. Nelsons and the BSO partner on recording the complete Shostakovich symphonies and the opera Lady Macbeth of the Mtensk District. The fourth and most recent instalment was released in February 2019. Each of the first three releases of the cycle have received Grammy Awards for Best Orchestral Performance, the third additionally winning in the Best Engineered Album, Classical category. Nelsons and the yellow label also have embarked upon a critically acclaimed project with the Gewandhausorchester that sheds new light on the symphonies of Bruckner, and pairs these distinctive symphonic pieces with works by Wagner. The most recent instalment was released in May 2019. Finally, Nelsons' recordings of Beethoven's complete symphonies with the Wiener Philharmoniker will be released in October 2019.

Mr. Nelsons has brought a jolt of youthful energy, along with charisma and accomplishment [to the Boston Symphony Orchestra at Carnegie Hall]. The audience gave Mr. Nelsons and the players an enormous ovation. Whatever the future, for now the Boston Symphony has placed its trust in a young dynamo. - The New York Times

Born in Riga in 1978 into a family of musicians, Andris Nelsons began his career as a trumpeter in the Latvian National Opera Orchestra before studying conducting. He was Music Director of the City of Birmingham Symphony Orchestra from 2008-2015, Principal Conductor of Nordwestdeutsche Philharmonie in Herford, Germany 2006-2009 and Music Director of Latvian National Opera 2003-2007.

Now in its 134th season, the Boston Symphony Orchestra gave its inaugural concert in 1881, realizing the dream of its founder, the Civil War veteran/businessman/philanthropist Henry Lee Higginson, who envisioned a great and permanent orchestra in his hometown of Boston. Today the BSO reaches millions of listeners, not only through its concert performances in Boston and at Tanglewood, but also via the internet, radio, television, educational programs, recordings, and tours. It commissions works from today's most important composers; its summer season at Tanglewood is among the world's most important music festivals; it helps develop future audiences through BSO Youth Concerts and educational outreach programs involving the entire Boston community; and, during the Tanglewood season, it operates the Tanglewood Music Center, one of the world's most important training grounds for young professional-caliber musicians. The Boston Symphony Chamber Players, made up of BSO principals, are known worldwide, and the Boston Pops Orchestra sets an international standard for performances of lighter music.

Launched in 1996, the BSO's website, bso.org, is the largest and most-visited orchestral website in the United States, receiving approximately 7 million visitors annually on its full site as well as its smart phone-/mobile device-friendly web format. The BSO is also on Facebook and Twitter, and video content from the BSO is available on YouTube. An expansion of the BSO's educational activities has also played a key role in strengthening the orchestra's commitment to, and presence within, its surrounding communities. Through its Education and Community Engagement programs, the BSO provides individuals of all backgrounds the opportunity to develop and build relationships with the BSO and orchestral music. In addition, the BSO offers a variety of free educational programs at Symphony Hall and Tanglewood, as well as special initiatives aimed at attracting young audience members.

The Boston Symphony Orchestra gave its inaugural concert on October 22, 1881, under Georg Henschel, who remained as conductor until 1884. For nearly twenty years, BSO concerts were held in the old Boston Music Hall; Symphony Hall, one of the world's most revered concert halls, opened on October 15, 1900. Henschel was succeeded by the German-born and -trained conductors Wilhelm Gericke, Arthur Nikisch, Emil Paur, and Max Fiedler, culminating in the appointment of the legendary Karl Muck, who served two tenures, 1906-08 and 1912-18. In 1915 the orchestra made its first transcontinental trip, playing thirteen concerts at the Panama-Pacific International Exposition in San Francisco. Henri Rabaud, engaged as conductor in 1918, was succeeded a year later by Pierre Monteux. These appointments marked the beginning of a French tradition maintained, even during the Russian-born Serge Koussevitzky's tenure (1924-49), with the employment of many French-trained musicians.

It was in 1936 that Koussevitzky led the orchestra's first concerts in the Berkshires; he and the players took up annual summer residence at Tanglewood a year later. Kousse­vitzky passionately shared Major Higginson's dream of "a good honest school for musicians," and in 1940 that dream was realized with the founding of the Berkshire Music Center (now called the Tanglewood Music Center).

Bernard Haitink, named principal guest conductor in 1995 and Conductor Emeritus in 2004, has led the BSO in Boston, New York, at Tangle­wood, and on tour in Europe, as well as recording with the orchestra. Previous principal guest conductors of the orches­tra included Michael Tilson Thomas, from 1972 to 1974, and the late Sir Colin Davis, from 1972 to 1984.

The first American-born conductor to hold the position, James Levine was the BSO's music director from 2004 to 2011. Levine led the orchestra in wide-ranging programs that included works newly commissioned for the orchestra's 125th anniversary, particularly from significant American composers; issued a number of live concert performances on the orchestra's own label, BSO Classics; taught at the Tangle­wood Music Center; and in 2007 led the BSO in an acclaimed tour of European music festivals. In May 2013, a new chapter in the history of the Boston Symphony Orchestra was initiated when the internationally acclaimed young Latvian conductor Andris Nelsons was announced as the BSO's next music director, a position he has taken up in the 2014-15 season, following a year as music director designate.

Today, the Boston Symphony Orchestra continues to fulfill and expand upon the vision of its founder Henry Lee Higginson, not only through its concert performances, educational offerings, and internet presence, but also through its expanding use of virtual and electronic media in a manner reflecting the BSO's continuing awareness of today's modern, ever-changing, 21st-century world. 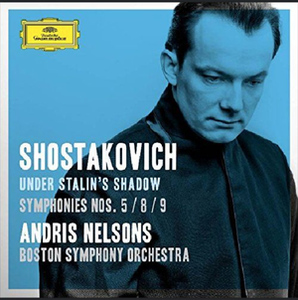 The Boston Symphony Orchestra, Andris Nelsons, and Deutsche Grammophon have expanded their award-winning recording partnership by extending their original agreement, which focused primarily on Shostakovich Symphonies 5-10 (works composed during the period of Shostakovich's difficult relationship with Stalin and the Soviet regime, mid-1930s to 1953), to include live recordings of the composer's entire canon of 15 symphonies, plus the masterpiece opera, Lady Macbeth of Mtsensk.  The first album of the new partnership between the BSO, Nelsons, and DG, Shostakovich's Symphony No. 10, released in July 2015, won the Grammy Award for Best Orchestral Performance at the 58th annual Grammy Awards in February 2016.