Andris Nelsons is Music Director of the Boston Symphony Orchestra and Gewandhauskapellmeister of the Gewandhausorchester Leipzig. These two positions, in addition to his leadership of a pioneering alliance between both institutions, have firmly established Grammy Award-winning Nelsons as one of the most renowned and innovative conductors on the international scene today.

Andris Nelsons conducted with concise focus and vigor and elicited the orchestra both tonal beauty and technical precision and visible enthusiasm. - The Boston Globe

Nelsons began his tenure as Music Director of the Boston Symphony Orchestra in the 2014/15 season. This season, the BSO and Nelsons embark on a major tour throughout Asia, giving their first concerts together in Seoul, Taipei, Hong Kong and Shanghai. The orchestra also continues its appearances at Carnegie Hall as part of the Great American Orchestras series, with a special concert performance of Act III of Wagner's Tristan und Isolde featuring Jonas Kaufmann. Since his appointment as Gewandhauskapellmeister in Leipzig in February 2018, Nelsons and the Gewandhausorchester have completed a number of successful tours, including their first Asia tour together in May/June 2019, performing in Japan and China. This season, the orchestra looks forward to two European tours, which will include performances at the BBC Proms, the festivals in Salzburg and Lucerne, as well as Vienna's prestigious Musikverein, October/November 2019 marks the special highlight for Nelsons, the Boston Symphony Orchestra and the Gewandhausorchester: three joint performances in Boston will be given as part of the alliance between the two orchestras, and the Gewandhausorchester will perform additional concerts as part of BSO's subscription series.

Nelsons leaned forward into the sound, sculpting the music with surpassing tenderness. - The Boston Globe

During the 2019/20 season, Nelsons continues his regular collaborations with the Wiener Philharmoniker, with whom he conducts the prestigious New Year's Day concert in 2020, broadcast to millions across the world. Furthermore, in celebration of the composer's 250th anniversary, the Wiener Philharmoniker and Nelsons present a cycle of Beethoven's symphonies at the Musikverein and on tour at the Philharmonie de Paris, Philharmonie am Gasteig in Munich, and Hamburg's Elbphilharmonie. Throughout his career, Nelsons has established regular collaborations with the Berliner Philharmoniker, Symphonieorchester des Bayerischen Rundfunks, Royal Concertgebouw Orchestra and has been a regular guest at the Bayreuther Festspiele and at the Royal Opera House in Covent Garden.

Andris Nelsons has an exclusive recording relationship with Deutsche Grammophon, which has paved the way for three landmark projects. Nelsons and the BSO partner on recording the complete Shostakovich symphonies and the opera Lady Macbeth of the Mtensk District. The fourth and most recent instalment was released in February 2019. Each of the first three releases of the cycle have received Grammy Awards for Best Orchestral Performance, the third additionally winning in the Best Engineered Album, Classical category. Nelsons and the yellow label also have embarked upon a critically acclaimed project with the Gewandhausorchester that sheds new light on the symphonies of Bruckner, and pairs these distinctive symphonic pieces with works by Wagner. The most recent instalment was released in May 2019. Finally, Nelsons' recordings of Beethoven's complete symphonies with the Wiener Philharmoniker will be released in October 2019.

Mr. Nelsons has brought a jolt of youthful energy, along with charisma and accomplishment [to the Boston Symphony Orchestra at Carnegie Hall]. The audience gave Mr. Nelsons and the players an enormous ovation. Whatever the future, for now the Boston Symphony has placed its trust in a young dynamo. - The New York Times

Born in Riga in 1978 into a family of musicians, Andris Nelsons began his career as a trumpeter in the Latvian National Opera Orchestra before studying conducting. He was Music Director of the City of Birmingham Symphony Orchestra from 2008-2015, Principal Conductor of Nordwestdeutsche Philharmonie in Herford, Germany 2006-2009 and Music Director of Latvian National Opera 2003-2007.

On 28 March 1842, the orchestra of the Vienna Court Opera, organised as a symphonic ensemble by composer-conductor Otto Nicolai, presented a concert that would develop into the Philharmonic Concerts and the Vienna Philharmonic. The principles on which the orchestra operates today were established then: artistic, organizational, and financial self-responsibility, with decisions made by the main body of active members, administrative work carried out by an elected committee, and membership made up only of musicians engaged by the Vienna State Opera.

In 1933 the orchestra abandoned the idea of a permanent music director but continued to maintain long-term relationships with conductors, including, for example, Arturo Toscanini, Erich Kleiber, Hans Knappertsbusch, George Szell, Bruno Walter and, again, Furtwängler. The Vienna Philharmonic has participated in the Salzburg Festival since 1922. 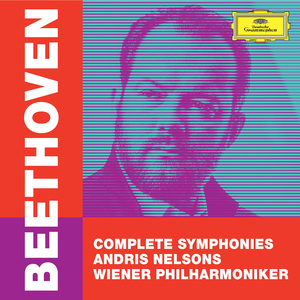 Andris Nelsons has joined forces with the Wiener Philharmoniker to record Ludwig van Beethoven's nine symphonies for Deutsche Grammophon. The release of their new album on 4 October 2019 will mark the start of the Yellow Label's celebration of the 250th anniversary of Beethoven's birth next year. The Nelsons Beethoven cycle is presented in a specially commissioned deluxe box featuring the nine works on five CDs and a single Blu-ray Audio disc in TrueHD sound quality.