An artist of rare versatility considered one of the most prominent violin virtuosos in Canada, for over 32 years Angele Dubeau has had a dazzling career in the great concert halls of the world. With a string of some 30 recordings, many concerts with renowned orchestras and as the conductor of her own ensemble, her talent, passion and musicality have won her uncommon acclaim. Prestigious prizes and numerous official honours have marked her path, including 10 Felix awards, an Opus Prize (Audience Prize), several Chocs de la musique, a Diapason d'or and the title of Soloist of the Year 1987, awarded by the French-language public radio networks, which took her to France, Belgium and Switzerland. She has also received the Tibor Varga Prize in Switzerland (1983) and the Prize of the Americas at the Vina del Mar International Competition Prize in Chile (1985). She has also become a Member of the Order of Canada and a Knight of the Ordre national du Quebec and has been awarded the Calixa-Lavalle Prize of the St-Jean-Baptiste Society of Montreal for her outstanding contribution to
music in Canada.

Angele Dubeau's musical trajectory remains unequalled. Introduced to the violin by Rolland Brunelle at a very young age, she gave her first concert when five years old. At age nine she attended Raymond Dessaints' class at the Montreal Conservatory of Music and became, at 15, the youngest student ever to receive a first prize in violin. Even then her virtuosity was noticed and she won several national competitions. She earned first prizes at the Canadian Music Competition (1976), the Orchestre symphonique de Montreal Competition (1976), the CBC National Competition (1979) and was awarded the Canada Council for the Arts Sylva Gerber Prize (1982).

Feeling ready to spread her wings even further, she moved to New York to work with Dorothy Delay at the prestigious Juilliard School of Music, then to Bucharest to study for three years with the eminent pedagogue Stefan Gheorgiu, while taking private lessons from the great
Henryk Szeryng.

At the age of 23, while already in demand as a violinist in Europe as well as in Asia and the US, she made her first recording, dedicated to Gabriel Faure, Alexis Constant and Claude Champagne, with the Radio-Canada International label. She has always remained faithful to Canadian composers, playing Francois Dompierre's Concerto for Violin the following year at Expo 86, and, throughout the years, a number of works written especially for her by Serge Arcuri, Marc Beaulieu, Linda Bouchard, Lorraine Desmarais, Denis Dion, Francois Dompierre, Jose Evangelista, Claude Gagnon, Christos Hatzis, Oliver Jones, Romulo Larrea, Simon Leclerc, Gilles Ouellet, Anthony Rozankovic, Gabriel Thibaudeau and Vic Vogel. In addition to promoting the work of these eminent Canadian composers, she has had the opportunity to premiere pieces dedicated to her by such giants as Dave Brubeck and Joe Hisaishi.

In 1986, for the first time, she travelled to Asia, where she performed Sibelius' Concerto with the Tokyo Philharmonic. The following year she charmed Chinese and Thai music lovers with her concerts during the official visit of the Governor General, Jeanne Sauve. That same year, she toured the Middle East as a soloist with the McGill Chamber Orchestra. After a recital at the prestigious Southbank Centre of London in April 1988, The Times described her as "a brilliant violinist... her performance was distinguished by fieriness of tone, absolute security of pitch... and pointing a requisite sense of fantasy and imagination." "Angele Dubeau is an artist who does not leave one indifferent. Her fine musicality, affecting sound and assured taste are all qualities that one doesn't often encounter," was Le Monde de la Musique's comment. The Ottawa Citizen paid homage to her as "one of the few true virtuosos", Repertoire (France) as a "first-class violinist", while the Toronto Sun stressed that she was "everything a soloist should be" and The Globe and Mail spoke of her as "a brilliant performer", "simply marvellous."

In 1988, when Analekta was founded, the label released a disc with Dubeau playing French Sonatas. At the 1990 ADISQ gala, she received the first of many Felix awards for her album Prokofiev, Tchaikovsky, Kabalevsky: Violin Concertos, with the Kiev Symphony Orchestra. From that album, we'll hear the stunning scherzo of Violin Concerto No. 1Violin by Prokofiev, which brings out the violinist's virtuosity, and the lyrical and tormented Serenade melancolique by Tchaikovsky.

Critics both here and abroad have repeatedly extolled her recordings. "It has frequently been said that Glenn Gould was the most important Canadian musician in the world. Today, one can say that Angele Dubeau occupies that position with distinction," suggested the Publico of Lisbon. Gramophone (United Kingdom) in 2007 hailed the quality of Solo, which marked the thirtieth anniversary of her career, with these words: "Dubeau plays everything with alluring sweetness and sophistication." The Strad stressed that it was necessary "to be an exceptional communicator to make a success of an unaccompanied violin disc. Dubeau evidently is: you feel she has a
tale to tell..."

From that recording, she is offering Caprice No. 9 by Locatelli, taken from his Arte del violino. At the end of the first and third movements of each of the 12 concertos of the cycle which were to inspire Paganini's Caprices a century later , the composer inserts, by way of a cadence, a technically extremely difficult caprice for solo violin, admirably displaying the
musician's brilliance.

While her virtuosity and musicality have seduced critics, the public has adopted Dubeau for her uncommon gifts as a communicator and her outstanding ability to connect with it. She is "remarkable as an instrumentalist and as a musician. We were able to appreciate her self-assurance, her intonation, her precision and her ability to connect with the public," La nacion of Buenos Aires asserted. "With its virtuosity, precision and enthusiasm, Angele Dubeau & La Pieta succeeds marvellously in captivating and bewitching the public," adds El Siglo de Torreon. In fact, she is the only Canadian classical musician to have been awarded two gold records for sales exceeding 50,000 albums sold in one year and has already succeeded in selling over 400,000 discs, an unheard-of exploit and an accomplishment that she continues to improve on, making her the most famous Canadian classical musician in the field. Here we can listen to excerpts from her recordings dedicated to five of the greatest concertos of the repertoire, composed by Mendelssohn, Glazounov, Tchaikovsky, Prokofiev, and Sibelius, works that she has performed worldwide, notably in Ukraine, Bulgaria, Romania, Japan,
China and Thailand.

Concerto for Violin in E minor by Mendelssohn, recorded when the Orchestre Metropolitain was new, at once holds the attention of the listener. Everything there sings with universal tenderness and warmth, thanks to Dubeau's flawless technique. The third movement of the too rarely performed Glazounov Concerto (a recording that won a Felix in 1991), which begins with a very ornate cadence, is, on the contrary, particularly flamboyant. As for Sibelius's Concerto, it remains one of the most dazzling achievements of the genre, with the solo part requiring uncommon virtuosity, but stripped of display. A brilliant violinist himself, Sibelius transformed the concerto by favouring contrasting textures, conveyed admirably in the rhapsodic
first movement.

A soloist admired here and abroad, Dubeau remains a convinced chamber musician, as she demonstrates in this transcription of "L'ho perduta" from Mozart's Nozze di Figaro (another album awarded a Felix), together with her friend, the late flutist Alain Marion, one of the giants of the
French school.

Moved by her constant and fervent desire to discover new repertoire, Dubeau has consequently approached rarely recorded pieces by Martinu. Written after the composer had spent some months in the countryside in the US and inspired by the beauty of birdsong, the Madrigal Sonata for Flute, Violin and Piano, is here a convincing three-way conversation with Alain Marion and Marc-Andre Hamelin. The prestigious periodical Diapason, after bestowing a Diapason d'or on this recording in 1995, explains: "The musicians give themselves over to such a display of intelligence and cohesion bordering on perfection in this chamber music, that that one can only stand back and admire."

Written when Schubert was only 19 years old, his Sonata in D major conjures up excitement and gaiety. While the work seems strongly influenced by Mozart and Beethoven, the last movement is an acknowledged rondo, a touching mixture of tenderness and mockery, admirably rendered by Dubeau and Anton Kuerti, without any doubt the greatest Canadian pianist. In1991, this recording earned the artists a "Choc" from the renowned Monde de la musique, which spoke of a "small miracle [...] Rarely have two players seemed to speak with one voice to
such an extent."

Innovation, renewal, sharing, but above all, seeking excellence could serve as mottoes for Dubeau. In 1997, she founded Angele Dubeau & La Pieta, a string ensemble with piano, consisting of women chosen from among some of the finest instrumentalists in Canada. She conducts the group, plays as a soloist with them, and acts as their artistic director. Since its beginning, La Pieta has appeared at some of the most prestigious venues in Canada, as well as on television. Known for their exceptional virtuosity, their impeccable precision, their magnificent interpretations, but above all the contagious thrill they communicate when playing, these musicians have travelled throughout North and South America, as well as in Asia for over a decade. Forbes maintains that "even the most pious music lovers here in America will find these performances hard to resist. Dubeau and company play each composition with an infectious, devil-may-care enthusiasm." The Los Angeles Times states: "Dubeau is an exciting, dynamic fiddler... The performances were consistently robust and inquiring, taking nothing for granted... Dubeau's well-drilled band played with agility, power, a nicely weighted sound and a fierce joy in the doing..." Gramophone declares: "Dubeau plays everything with alluring sweetness and sophistication and her colleagues match her tender, inflected playing note for note. Somehow the disc (Fairy Tale) found its way into my CD player, where it began to weave a spell. Again and again."

Taken from Infernal Violins rewarded with a gold record and a Felix and Passion, another award-winning recording performed by Angele Dubeau & La Pieta, she interprets, with touching sensitivity the Nocturne in C-sharp minor (Posthumous), by Chopin, the luminous Navarra by Sarasate, requiring agility and precision, and the famed Caprice No. 24 by Paganini, technically demanding, recommended by Classicstoday.

Whether standing alone, in front of an orchestra, or in the intimacy of chamber repertoire, Angele Dubeau, with La Pieta, continues to move and astonish us, while wanting only one thing: to start again. 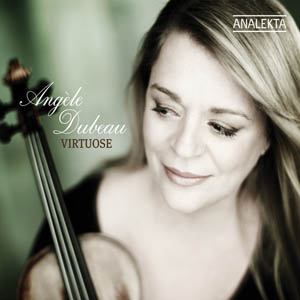 An artist of rare versatility considered one of the most prominent violin virtuosos in Canada, for over 32 years Angele Dubeau has had a dazzling career in the great concert halls of the world. With a string of some 30 recordings, many concerts with renowned orchestras and as the conductor of her own ensemble, her talent, passion and musicality have won her uncommon acclaim. Prestigious prizes and numerous official honours have marked her path, including 10 Felix awards, an Opus Prize (Audience Prize), several Chocs de la musique, a Diapason d'or and the title of Soloist of the Year 1987, awarded by the French-language public radio networks, which took her to France, Belgium and Switzerland. She has also received the Tibor Varga Prize in Switzerland (1983) and the Prize of the Americas at the Vida del Mar International Competition Prize in Chile (1985). She has also become a Member of the Order of Canada and a Knight of the Ordre national du Quebec and has been awarded the Calixa-Lavalle Prize of the St-Jean-Baptiste Society of Montreal for her outstanding contribution to music in Canada. She is proud to present this new collection of classical favorites on Virtuose.