Anne-Sophie Mutter is a musical phenomenon: for 40 years the virtuoso has now been a fixture on the international stages of the world's major concert halls, making her mark on the classical music scene as a soloist, mentor and visionary. The year 2017 marks the 40-year anniversary of her debut as a soloist at the Salzburg Whitsun Concerts under Herbert von Karajan's baton, which took place when she was 13, on May 28, 1977.

The four-time Grammy® Award winner is equally committed to the performance of traditional composers as to the future of music: so far she has given world premieres of 25 works – Sebastian Currier, Henri Dutilleux, Sofia Gubaidulina, Witold Lutoslawski, Norbert Moret, Krzysztof Penderecki, Sir André Previn, Wolfgang Rihm and John Williams have all composed for Anne-Sophie Mutter. Furthermore, she dedicates herself to numerous benefit projects and to supporting tomorrow's musical elite: in the autumn of 1997 she founded the "Association of Friends of the Anne-Sophie Mutter Foundation e.V.", to which the Anne-Sophie Mutter Foundation was added in 2008. These two charitable institutions provide support for the scholarship recipients, support which is tailored to the fellows' individual needs. Since 2011, Anne-Sophie Mutter has regularly shared the spotlight on stage with her ensemble of fellows, "Mutter's Virtuosi".

CONCERTS IN 2017 - The year 2017, featuring concerts in Europe in North America, reflects the violinist's musical versatility and illustrates her unparalleled rank in the world of classical music. At the Tanglewood Festival, she performs the world premiere of John Williams' work Markings for solo violin, strings and harp. She also appears at the Salzburg Whitsun and Summer Festivals, at the Lucerne Summer Festival and La Scala in Milan, as well as performing with the Berlin Philharmonic, the Staatskapelle Berlin, the Boston Symphony Orchestra, the Gewandhaus Orchestra, the London Philharmonic, the London Symphony Orchestra and the Pittsburgh Symphony Orchestra. Together with "Mutter's Virtuosi" and the exceptional pianist Daniil Trifonov, she performs the Trout Quintet as well as The Four Seasons. Together with her long-standing duo partner Lambert Orkis, she gives recitals in Europe and in North America.

AWARDS - In December 2016, the Spanish Ministry of Education, Culture and Sports awarded her the "Medalla de oro al Mérito en las Bellas Artes" (Gold Medal for Merits in the Fine Arts). In January 2015 Anne-Sophie Mutter was named an Honorary Fellow of Keble College at the University of Oxford. In October 2013 she became a Foreign Honorary Member of the American Academy of Arts and Sciences, after winning the medal of the Lutoslawski Society (Warsaw) in January. In 2012 the Atlantic Council bestowed the Distinguished Artistic Leadership Award upon her. In 2011 she received the Brahms Prize as well as the Erich Fromm Prize and the Gustav Adolf Prize for her social activism. In 2010 the Technical-Scientific University of Norway in Trondheim bestowed an honorary doctorate upon her; in 2009 she won the European St. Ulrich Award as well as the Cristobal Gabarron Award. In 2008 Anne-Sophie Mutter was the recipient of the International Ernst von Siemens Music Prize as well as the Leipzig Mendelssohn Prize. The violinist has been awarded the German Grand Order of Merit, the French Medal of the Legion of Honour, the Bavarian Order of Merit, the Decoration of Honour for Services to the Republic of Austria, and numerous other honors.

Lambert Orkis has received international recognition as chamber musician, interpreter of contemporary music, and performer on period instruments.  He has appeared worldwide with violinist Anne-Sophie Mutter since 1988 and performed in recital with cellist Mstislav Rostropovich for more than eleven years.

A multi-Grammy Award nominee, his wide discography comprises works of the classical, romantic, and modern eras on many labels.  With Anne-Sophie Mutter, he has frequently recorded for Deutsche Grammophon, winning a Grammy Award for "Best Chamber Music Performance" for the Beethoven piano and violin sonatas, and a 2006 "Choc de l'année" award from the French magazine Le Monde de la Musique for the Mozart piano and violin sonatas audio recording.  Audio as well as video discs of Brahms' sonatas for piano and violin by these musicians will be released in 2010.  He has also recorded works of Brahms, Schumann, and Chopin/Franchomme with Dutch cellist Anner Bylsma.  With violist Steven Dann, he appears on an ATMA Classique disc of works by Brahms, and has released discs on Bridge Records of solo works written for him by George Crumb, Richard Wernick, and James Primosch.

He premiered in Carnegie Hall and the Kennedy Center in Washington, DC, Wernick's Piano Concerto which was written for him, the National Symphony Orchestra, and as conductor, Mstislav Rostropovich.  Subsequently for the recording on Bridge Records, Mr. Orkis is paired with Symphony II of Chicago.  The European premiere took place with Mr. Orkis and Het Residentie Orkest of The Hague, The Netherlands.  In both instances, the composer conducted.

Solo discs as fortepianist of Schubert works for Virgin Classics have been recorded.  As founding member and fortepianist of the Smithsonian Institution's Castle Trio, he has given many performances including several cycles of Beethoven's twenty-eight major works for fortepiano and strings, and produced highly regarded recordings of Beethoven and Schubert trios.

His most recent solo releases on the Bridge Records label include, as fortepianist and pianist, three separate performances of Beethoven's Appassionata sonata using instruments based upon Viennese piano building designs which represent three snapshots in time of Viennese keyboard evolution.  Another disc features piano music by Louis Moreau Gottschalk performed on an 1865 Chickering concert grand piano from the collections of the Smithsonian Institution, Washington, DC.

Lambert Orkis has held the position of Principal Keyboard of Washington's National Symphony Orchestra since 1982, and has performed chamber music with NSO Principal Cellist David Hardy since 1983.

Mr. Orkis' most recent recording, Beethoven Past & Present, on Dorian Recordings and in collaboration with Mr. Hardy, contains two complete performances of Beethoven's eight works for piano and cello performed on both modern and period instruments.

In addition to performing with the National Symphony Orchestra, Lambert Orkis is a founding member of the Kennedy Center Chamber Players and has appeared with this ensemble before enthusiastic audiences in the Kennedy Center's Terrace Theater since 2003 and on an Atlantic Ocean crossing aboard the Queen Mary 2 this past September.  Recordings by this ensemble that have been released on the Dorian label include The Beauty of Two [duos for piano with cello (by Grieg and Martinů performed with Mr. Hardy), viola (Hindemith), and flute (Poulenc)], and An Emotional Journey, Clarinet Works of Johannes Brahms (two sonatas performed with Principal Clarinetist Loren Kitt and, joined by Mr. Hardy, the clarinet trio.)

He is Professor of Piano at Temple University's Esther Boyer College of Music and Dance in Philadelphia, having received the university's Faculty Award for Creative Achievement.

In acknowledgment of his accomplishments, he was recently honored with Germany's Cross of the Order of Merit. 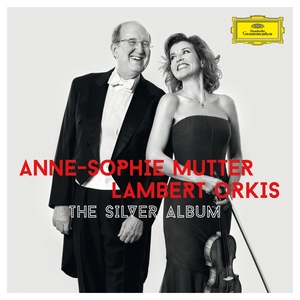 Anne-Sophie Mutter and Lambert Orkis celebrate a landmark anniversary with the U.S. release of The Silver Album. Their artistic partnership, among the strongest in classical music, began 25 years ago with a recital tour of the United States. It has flourished ever since, thanks to a remarkable range of performance projects and critically acclaimed recordings for Deutsche Grammophon. As well as 40 minutes of newly recorded music, The Silver Album features the world premiere recordings of Krzysztof Penderecki's La Follia for solo violin (2013) and André Previn's Violin Sonata No. 2 (2012), together with the "Méditation" from Massenet's Thaïs and Ravel's Pièce en forme de Habanera. The special two-disc set also contains substantial sonatas by Mozart, Beethoven, Brahms and Fauré set in company with timeless encore pieces, Fritz Kreisler's Liebesleid and three of Brahms's Hungarian Dances among them.