In an award-winning career that has encompassed TV, film, stage and concert work around the globe, Betty Buckley is probably best known as the quintessential musical theatre actress.

Dubbed "The Voice of Broadway," the multitalented artist is one of a precious few who helped change the face of musical theatre acting with her realistic, naturalistic approach to roles that run the gamut from the wife of an early U.S. President (1776), which marked Buckley's Broadway debut, through a critically acclaimed, Olivier Award-nominated performance as deluded, silent-screen star Norma Desmond (Sunset Boulevard), a part she re-created on Broadway to equal success.

Buckley, it should be noted, helped revolutionize the modern musical theatre in story, song and sound. For anyone who has ever heard the Tony-winning actress sing, it is evident she possesses one of the finest, and perhaps the most unique, instruments: a voice of supple steel, capable of piercing the soul with either its razor-edged belt or ethereal upper register. It is one that spans the dynamic range of vocal colors, a voice that has been stopping the hearts of concert and theatregoers for years.

Yet, it is not just the voice that creates the magic, it is Buckley's consummate acting skills as well as her intelligent approach to material. Like a pointillist painting, all these elements somehow combine to form a masterwork, and one can't help but become mesmerized by the world of her artistry. Whether she's breaking your heart with Andrew Lloyd Webber's "Memory" in her Tony-winning turn as Grizabella the Glamour Cat in "CATS", bringing down the house with "The Writing on the Wall" in a gender-bending performance in "The Mystery of Edwin Drood" or simultaneously frightening and moving an entire audience as religious fanatic Margaret White in the cult-classic musical "Carrie", a Betty Buckley performance is one that remains indelibly etched into one's mind and soul.

Other theatre roles have included Martha in "Arsenic and Old Lace", the domineering stage mother Rose in the musical theatre classic "Gypsy", Countess Aurelia in the long-awaited London debut of "Dear World", and, most recently, Gertrude Hayhurst Sylvester Ratliff in the Signature Theatre Company's world premiere of Horton Foote's "The Old Friends", which garnered Buckley a 2014 Drama Desk Award nomination for Outstanding Featured Actress in a Play.

In addition to her contributions to the stage, Buckley has also released an astonishing 16 solo albums, a rarity in the world of musical theatre and in an ever-changing music business. She has been nominated twice for a Grammy, the music world's highest honor: in 2000 for "The Diaries of Adam and Eve" and again in 2002 for her London recording, "Stars and the Moon: Live at the Donmar."

And while there may be nothing quite like seeing (or hearing) Buckley live, her inimitable talent shines through superbly on both the small and silver screen, as evidenced by her ever-growing resume.

On television, she played everyone's favorite stepmother, Abby Bradford, in the drama series "Eight is Enough" (1977-1981) and received Daytime Emmy Award nominations for her work in both "Bobby and Sarah" (1984) and "Taking a Stand" (1989). She also had a recurring role in the gritty HBO series "Oz" (2001-2003), and in 2012 she gained an entirely new set of fans for her recurring role on "Pretty Little Liars."

Buckley's film roles include Ms. Collins, the gym teacher in Brian dePalma's classic "Carrie" (1976) - she would later earn critical acclaim for her performance as the fanatically religious mother in the Broadway musical version of that telekinetic tale - country singer Dixie Scott in Bruce Beresford's "Tender Mercies" (1983), which features her soul-piercing rendition of the Academy Award-nominated and Golden Globe winning song "Over You." She also portrayed Sondra Walker, wife of Harrison Ford's character in Roman Polanski's "Frantic" (1988), Kathy in Woody Allen's "Another Woman," making a lasting impact in one brief scene (1988), Virginia Earp in "Wyatt Earp" (1999) and Mrs. Jones in M. Night Shyamalan's "The Happening" (2008).

In April 2009 Buckley received the Texas Medal of the Arts Award in Theater, following her induction into the Texas Film Hall of Fame in Austin, TX, in March 2007. She has been awarded two honorary doctorates of fine arts for her contribution to the musical theatre by Marymount College and the Boston Conservatory of Music.

In 2012 Buckley was inducted into the Theater Hall of Fame, where her name - engraved on the walls of the Gershwin Theatre - is forever linked with the greatest stars Broadway has ever produced, from its inception to present day. 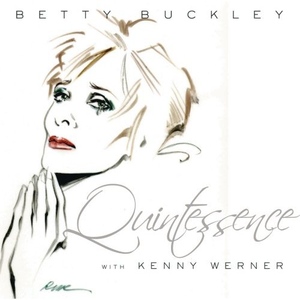 Playbill Records announces their second collaboration with Tony Award Winner and Broadway legend, Betty Buckley, entitled QUINTESSENCE, a stunning tribute to Buckley's eighteen year working relationship with legendary jazz great, Kenny Werner. This album is the pair's ninth album together and is a perfect bookend to the recently released Betty Buckley 1967, released this past October. Quintessence will be released on the same day that Buckley will return to New York's famed Feinstein's at Loews Regency for a three week engagement.