Billy Childs was born in Los Angeles on March 8th, 1957. Having demonstrated an aptitude for piano as early as age six, Childs developed rapidly, and at age sixteen entered the USC-sponsored Community School of the Performing Arts, studying theory with Marienne Uszler and piano with John Weisenfluh. In 1975, he entered USC as a composition major, graduating four years later with a bachelor of music in composition under the tutelage of Robert Linn.

Since then Mr. Childs has received a number of orchestral commissions from, among others: Esa-Pekka Salonen and the Los Angeles Philharmonic, the Detroit Symphony Orchestra under the baton of Leonard Slatkin, the Los Angeles Master Chorale, The Kronos Quartet, the Lincoln Center Jazz Orchestra, the American Brass Quintet, and the Dorian Wind Quintet.

After apprenticing with Freddie Hubbard and J.J. Johnson in the late seventies and early eighties, Childs' solo jazz recording career began in 1988, when he released Take For Example, This... the first of four critically acclaimed albums on the Windham Hill Jazz label. He followed that album with Twilight Is Upon Us (1989), His April Touch (1992), and Portrait Of A Player (1993). His next album, I've Known Rivers on Stretch/GRP (now Stretch/Concord) was released in 1995, followed by The Child Within, released on the Shanachie record label in 1996. Most recently, Mr. Childs has recorded two volumes of jazz/chamber music – Lyric, Vol. 1 (2006) and Autumn: In Moving Pictures, Vol. 2 (2010) – music which is an amalgam of jazz and classical elements, developed with his ensemble through rehearsal, performance, and recording, over the course of ten years.

Thus far, in his career, Childs has garnered ten Grammy nominations and three Grammy awards: two for best instrumental composition (Into the Light from Lyric and The Path Among The Trees from Autumn: In Moving Pictures) and one for best arrangement accompanying a vocalist.  Most recently in 2013, Childs was awarded the prestigious Doris Duke Performing Artist Award.  In 2009, Childs was the recipient of a Guggenheim Fellowship and in 2006 was awarded a Chamber Music America composer's grant.

As a pianist Childs has recently performed with, among others, Yo-Yo Ma, Sting, the Los Angeles Philharmonic, the Detroit Symphony, the Kronos Quartet, Wynton Marsalis, Jack DeJohnette, Ron Carter, the Ying String Quartet, the American Brass Quintet, and Chris Botti. In January 2010, The Detroit Symphony (Leonard Slatkin conducting) premiered Childs' Concerto For Violin And Orchestra with Regina Carter as soloist. Upcoming projects include a new piece for Duke University composed for his Jazz/Chamber Ensemble featuring Dianne Reeves and the Ying Quartet and a recording for Sony Masterworks: a re-imagining of the music of Laura Nyro. 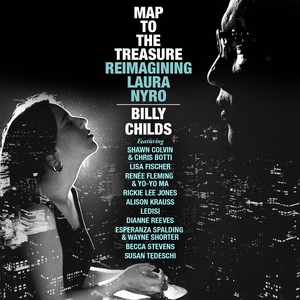 When the Grammy-winning Composer/Arranger/Pianist Billy Childs was 11 years old, his older sisters introduced him to the work of Hall Of Fame singer-songwriter Laura Nyro. Her blend of Broadway-inspired melodies, jazz improvisation and socially conscious lyrics have stayed with him. Now he has returned to this early source of inspiration, conceiving and orchestrating Map To The Treasure: Reimagining Laura Nyro, an all-star interpretation of this songwriter's beloved works. Released by Masterworks, Mr. Childs leads guests include - Renee Fleming, Esperanza Spalding, Yo-Yo Ma, Alison Krauss, Ledisi and Wayne Shorter.