Born on May 9, 1949, in New York, Billy Joel bounced back after a disappointing first album, Cold Spring Harbor (1971), with 1973's Piano Man, featuring hits like "Piano Man" and "Captain Jack." He went on to make successful albums like Streetlife Serenade (1974), The Stranger (1977) and 52nd Street (1978). In the 1980s, Joel married supermodel Christie Brinkley, and topped the musical charts with "Uptown Girl" and "We Didn't Start the Fire." By 1999, his worldwide song sales had topped $100 million, and he was inducted into the Rock and Roll Hall of Fame. Several years later, in 2013, he received the Kennedy Center Honors.

Early Life - Singer-songwriter William Martin "Billy" Joel was born in the Bronx, New York, on May 9, 1949, to Howard and Rosalind Joel. Shortly after he was born, the family moved to a section of America's famous "first suburb," Levittown on Long Island. Although his father was an accomplished classical pianist, it was Joel's mother who pushed the young boy to study piano. He began playing at the age of four and showed an immediate aptitude for the instrument. By the time he was 16, Billy Joel was already a pro, having joined his third band before he could drive.

Early Career - It wasn't long before the artist, inspired by the Beatles' iconic Ed Sullivan Show performance, committed heart and soul to a life in music. He dropped out of high school to pursue a performing career, devoting himself to creating his first solo album Cold Spring Harbor, which was released in 1971. The terms of Joel's contract with Family Productions turned out to be onerous and the artist was unhappy with the quality of the album they released. It wasn't a commercial success.

Disillusioned with trying to make it as a rock star, Joel moved to Los Angeles to fly under the radar for a while. In early 1972, he got a gig working as a lounge pianist under the pseudonym Bill Martin. His time playing at The Executive Room on Wilshire Boulevard would later be immortalized in his song "Piano Man," which describes a no-name lounge's down-and-out patrons.

By late 1972, an underground recording of Joel's "Captain Jack" had been released on the East Coast and was garnering positive attention. Executives from Columbia Records sought out the lounge player and gave Joel a second chance to become a rock star.

Career Breakthrough - With the momentum of a Top 20 single ("Piano Man") to his name, Joel began recording new songs and albums, coming out with Streetlife Serenade in 1974. Many of his songs related to a growing frustration with the music industry and Hollywood, foreshadowing his exit from Los Angeles in 1976. As the years passed, Joel's style began to evolve, showing his range from pop to the bluesy-jazz stylings that are now closely associated with his name. The Stranger (1977) was Joel's first major commercial breakthrough, landing him four songs in the Top 25 of the U.S. Billboard charts. By 1981, Joel had collected a slew of awards, including a Grammy for Best Male Rock Vocal Performance and a People's Choice Award.

Awards and Achievements - Through the 1980s, Joel would be crowned a hit-maker with smashes such as "Tell Her About It," "Uptown Girl," "Innocent Man" and "The Longest Time." He would release two volumes of Greatest Hits and become the first American performer to unleash a full-scale rock production in the Soviet Union. While churning out hits, Joel would also frequent the benefit circuit, performing with stars such as Cyndi Lauper and John Mellencamp to raise money for various causes.

In 1989, on the heels of the successful single "We Didn't Start the Fire," Joel was presented with the Grammy Legend Award. His professional success continued unabated into the early 1990s, although his personal life became somewhat dramatic. After the release of River of Dreams (1994), Joel slowed his studio recordings but continued to tour alone and in combination with fellow artists such as Elton John. In 1999, the worldwide sales of his songs passed the 100 million mark. Also that year, Joel was inducted into the Rock and Roll Hall of Fame by his idol, Ray Charles. Several years later, in 2013, Joel received the Kennedy Center Honors.

Later Career - In the early 2000s, Joel found himself in and out of rehab, struggling with an ongoing alcohol addiction. In 2007, Joel released the single "All My Life," his first song with original lyrics in 13 years. Though semi-retired in terms of recording new pop songs, Joel has continued to tour and branch out as an artist. He has composed a number of classical songs and even reworked older ballads with an orchestral backing.

Throughout the years, Joel's songs have acted as personal and cultural touchstones for millions of people, mirroring his own goal of writing songs that "meant something during the time in which I lived... and transcended that time."

When Joel's residency at Madison Square Garden was announced in 2013, his devoted fans proved how much the singer's music resonated with them. As the first music franchise in MSG's history, Joel broke records; his monthly concerts have sold out every time, and as of October 2015, he has grossed over $46 million in sales.

Personal Life - In 1982, Joel split with his first wife, Elizabeth Weber Small, who had been his partner since 1973. In 1984, Joel would famously meet and marry supermodel Christie Brinkley. Soon after, their daughter Alexa Ray (named after Ray Charles) was born on December 29, 1985.

Joel divorced Brinkley in 1993. In 2004, he married the television personality and journalist Katie Lee. They would eventually divorce after five years of marriage.

In 2015, Billy Joel and his girlfriend of six years, Alexis Roderick, announced they were expecting a baby together. That summer, Joel and Roderick tied the knot at the couple's annual Fourth of July party at his Long Island estate. New York Governor Andrew Cuomo presided over the nuptials. Their daughter Della Rose Joel was born on August 12, 2015.

Fact Check We strive for accuracy and fairness. If you see something that doesn't look right, contact us! 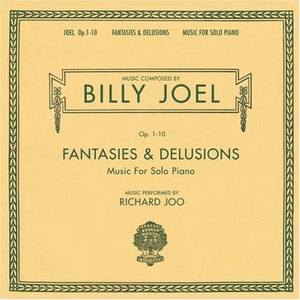 Waltzes, suites, airs, fantasies, inventions - these kinds of pieces have formed the Western classical-piano repertoire for centuries, as anyone who has ever wound a metronome knows. And as anyone who has ever heard Billy Joel also realizes, that studious tradition has always underlaid his music. So this collection of pieces for solo piano written by Joel and performed with highly extroverted skill by Richard Joo represents, in essence, Joel's roots album. As a restless rock & roller, and now as a composer, he restages the scarlet-hued nineteenth-century thrusts and taxing engagements of legendary Russian and German composers. But Joo begins this collection breathing Joel's "Reverie (Villa D'Este)," which exhales delicate French colorations and impressionistic dissolves. Elsewhere, Joo plays a number of showy waltzes, explores Verdian melodicism on "Aria (Grand Canal)," and climaxes the sequence with "Air (Dublinesque)," whose piquant folk-based strains almost meld this new Joel of scales and arpeggios with the always hummable Joel of popular song. Fantasies doesn't always jell this satisfyingly, but for the most part, Joel doesn't let his delusions get the best of him.