Cellist Bion Tsang is internationally recognized as one of the outstanding instrumentalists of his generation: among his many honors are an Avery Fisher Career Grant, an MEF Career Grant and the Bronze Medal in the IX International Tchaikovsky Competition. Mr. Tsang earned a 2010 Grammy nomination for his performance on the 2009 PBS special A Company of Voices: Conspirare in Concert(Harmonia Mundi).

Mr. Tsang's discography includes the 2010 release from Artek Recordings, Bion Tsang and Anton Nel: Live in Concert, Brahms Cello Sonatas and Four Hungarian Dances, featuring original transcriptions of Joseph Joachim's violin arrangements of Brahms' iconic Hungarian melodies. His discography also includes the Kodaly works for solo cello as well as a forthcoming set of the complete Bach Suites for Unaccompanied Cello recorded on the 1713 "Bass of Spain" Stradivarius. He has performed all six Bach Suites in one sitting first in Austin and later in Seattle at Nordstrom Recital Hall at Benaroya Hall. In addition, Mr. Tsang has toured the complete Beethoven works for cello and piano with pianist Anton Nel in, among other venues, the new Zankel Hall at Carnegie Hall and Jordan Hall in Boston, with the latter performance recorded and commercially released on the Artek label.

A versatile collaborator, Mr. Tsang was featured on the soundtrack to Recapturing Cuba: An Artist's Journey, a PBS documentary by Trinity Films, winning two Gold Medals-Director's Choice and Artistic Excellence-at the Park City Film Music Festival, coincident to the Sundance Film Festival. He was a featured guest artist on the KLRU-TV and PBS television production, A Company of Voices: Conspirare in Concert, filmed in Dell Hall at the Long Center for the Performing Arts in Austin, and aired nationally on PBS stations during their March 2009 pledge drives. Tsang has also been featured on KLRU-TV's In Context recorded in the Austin City Limits studio, the first time classical musicians appeared in that space. A frequent collaborator with the Hong Kong City Contemporary Dance Company, he has performed solo cello onstage alongside the dancers in productions of There, After…(Kodaly Op. 8 Solo Sonata) and Plaza X (Bach Solo Suites).

Mr. Tsang made his professional debut at age eleven in two concerts with Zubin Mehta and the New York Philharmonic. That same year he returned to perform two more concerts with Maestro Mehta and the Philharmonic. One of these performances was broadcast worldwide on the CBS Festival of Lively Arts television series. While still in his teens, he became the youngest cellist ever to receive a Gregor Piatigorsky Memorial Prize and the youngest recipient ever of an Artists International Award. He was also chosen as a Finalist of the NFAA's Arts Recognition and Talent Search and subsequently as a Presidential Scholar in the Arts. At age nineteen, Tsang became the youngest cellist to win a prize in the VIII International Tchaikovsky Competition. He has been featured on America Online as CultureFinder's "Star Find of the Week," on the Internet Cello Society as "Artist of the Month," and most recently in print in the book 21st-Century Cellists.

Born in Michigan of Chinese parents, Bion Tsang began piano studies at age six and cello at age seven. The following year, he entered The Juilliard School. Tsang received his Bachelor of Arts degree from Harvard University and his Master of Musical Arts degree from Yale University, where he studied with Aldo Parisot. His other principal cello teachers have included Ardyth Alton, Luis Garcia-Renart, William Pleeth, Channing Robbins, and Leonard Rose.

Mr. Tsang resides in Austin, TX where he is Division Head of Strings and holds the Joe R. & Teresa Lozano Long Chair in Cello at the Sarah and Ernest Butler School of Music at The University of Texas at Austin. He was the recipient of the Texas Exes Teaching Award after just his first year of service and in 2004-05 was named "Instrumentalist of the Year" by the Austin Critics Table. In 2005-06 he was also visiting professor at Indiana University in Bloomington. In his spare time, Bion helps his family run the Paul J. Tsang Foundation, a nonprofit organization named in honor of Bion's father and formed to help facilitate educational or career opportunities for promising students and professionals in the arts and sciences. He also enjoys coaching and, especially, trying to keep up with the various adventures and endeavors of his three children: Bailey, Henry and Maia.

Mr. Tsang plays on a Wayne Burak workbench series cello made in April 2011. 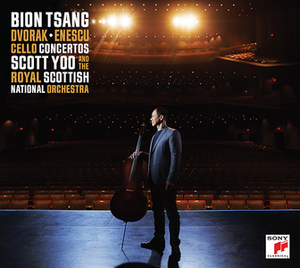 Tsang gave the United States premiere of George Enescu's Symphonie Concertante, Op. 8, with the American Symphony Orchestra at Avery Fisher Hall, Lincoln Center, in 2000.  He immediately fell in love with the work, finding in it many similarities to his long-time favorite concerto, the much-celebrated Dvořák b minor, Op. 104.  "Each of these concertos takes the listener on an epic journey," says Tsang. "They are both gloriously lush and dramatic in their orchestration, and the cello sings above this backdrop with intense emotion. In both pieces, I feel there are distinct depictions of longing, searching, struggle, and finally triumph."