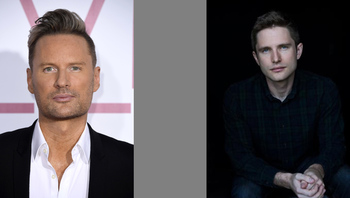 BRIAN TYLER is a composer and conductor of over 70 films and was named Film Composer of the Year at the 2014 Cue Awards. Tyler composed the score for blockbuster hits such as Avengers: Age of Ultron, Furious 7, Iron Man 3, Thor: The Dark World, and the breakout hit Crazy Rich Asians featuring a big band jazz and romantic string score that was voted to the 2019 Oscar shortlist for Best Original Score. In addition, he scored Eagle Eye for producer Steven Spielberg, The Mummy starring Tom Cruise, and The Fate of the Furious which at the time had the biggest global box office opening ever. He also composed the theme for Formula 1 which airs during the global broadcast of every race to an audience of hundreds of millions. Tyler often conducts the London Philharmonic, the Philharmonia Orchestra of London, and the Hollywood Studio Symphony for his projects. He was nominated for a 2014 BAFTA Award and was inducted into the music branch of the Academy of Motion Picture Arts and Sciences in 2010.  His films have grossed $13 billion worldwide making him the 9th highest grossing film composer of all-time.

Tyler began scoring features shortly after completing his master's degree from Harvard University and receiving a bachelor's degree from UCLA. In 2003, after composing the score for The Hunted for Academy Award-winning director William Friedkin, Tyler wrote the score for the turn-of-the-century drama The Greatest Game Ever Played for Disney in 2005, starring Shia LaBeouf. He also scored The Expendables films and Rambo (both directed by Sylvester Stallone), Taylor Sheridan's Yellowstone (which won the SoundTrackFest Award for Best TV Score of 2018) with the third season having premiered on June 21, 2020, the 2017 hit Power Rangers, and co-composed One Strange Rock with pop artist Zedd for director Paul Thomas Anderson. Tyler also wrote the score for the 2015 feature film Truth starring Cate Blanchett as Mary Mapes and Robert Redford as Dan Rather.

A multi-instrumentalist and orchestral conductor, Tyler is skilled in playing piano, guitar, drums, bass, cello, world percussion, guitarviol, charango and bouzouki, amongst others. He showcased this range of expertise for the retro heist film Now You See Me and its sequel. Tyler also conducts symphonic concerts of his film music around the globe including multiple concerts with the London Philharmonia Orchestra at Royal Festival Hall, the Warsaw Philharmonic at Tauron Arena, and at the historic Dolby Theatre in Los Angeles with the Chinese National Orchestra. Along with scoring the 2014 Michael Bay-produced film Teenage Mutant Ninja Turtles, Tyler wrote and produced the movie's theme song Shell Shocked under his electronic music alter-ego Madsonik. The song features multiplatinum-selling artist Wiz Khalifa, Ty Dolla $ign, and Kill the Noise. The song was certified platinum by RIAA. He also collaborated with Rage Against the Machine's Tom Morello on the hit song Divebomb.

His score for Bill Paxton's Frailty won him a World Soundtrack Award in 2002, as well as The World Soundtrack Award for Best New Film Composer of the Year. Additionally, Tyler has received 32 BMI Music Awards, 5 ASCAP Music Awards, 3 Emmy Award nominations, and won 12 Goldspirit Awards, including Composer of the Year. Tyler's soundtracks are mainstays on the charts, with his work for Children of Dune reaching No. 4 on Amazon Music's album charts while Avengers: Age of Ultron, Furious 7, Thor: The Dark World, Iron Man 3, and Fast Five have all hit No. 1 on the iTunes soundtrack charts.

In addition to his resume of films, Tyler arranged and conducted the film logo music for Universal Pictures. He also composed the music for the Marvel Studios logo in 2014. Tyler created the theme music for the NFL on ESPN in 2014 as well as the theme for the U.S. Open Championships now airing annually on FOX. His television series credits include Yellowstone, Scorpion, Magnum PI, and Hawaii Five-0 while he has received Emmy nominations for Last Call, Sleepy Hollow, and Transformers: Prime.

JOHN CAREY is a professional bassist, producer, singer-songwriter and music educator living in New York City. He began his music career at an early age, performing regularly at well known clubs in NYC since the age of sixteen. His bass playing, singing and song-writing abilities have lead him to perform, tour and record with bands and artists of all genres, including rock, folk, funk, R&B, blues, fusion and world music. John is recognized as one of the few bassists who can fit into nearly any musical situation, providing solid, song-oriented grooves, whether playing bass in a small club in NYC, out on the road or recording in the studio. As record producer, John has worked with some of the best bands and musicians New York City has to offer.

As a solo artist, John has released three of his own CDs. His first release, John Carey, "undefined psycho-chromatic G.R.I.D." (2005, Planet Bass, NYC) explores the avant-garde: the completely live and improvisational album captures the stream of conscious thought processes between some of today's most talented, unique and interesting musicians. The CD spans multiple genres of music, and provides for a multimedia and multi-sensory experience . . . A truly fascinating record with an all-star lineup.