Vocalist/guitarist/composer CAMILA MEZA is a rarity, a glorious triptych of an artist. She possesses a gift for composing brilliant musical landscapes, a captivating, soulfully pure vocal instrument, and a consummate prowess on guitar, ablaze with irresistible melodies and improvisations. Camila Meza, originally from Santiago, Chile, has garnered rapt attention from her colleagues, the press, and audiences in South America, New York City, and internationally, for her distinctive ability in blending jazz with her broad musical world (that includes Latin American, Brazilian, folk and pop), and for the emotional depth of her music. This rising star on the global jazz scene has been described by The New York Times as, "a bright young singer and guitarist with an ear for music of both folkloric and pop intention," and called, "a natural multi-talent, an improvising singer-guitarist who is one of the finest in the world in both creative realms," by pianist Aaron Goldberg. He added that, "she unites North and South America in a multilingual mega-continent, a pangaea of swing and harmony." Being called to join your peers on stage and in the studio remains one of the true tests that any NYC jazz musician will face, and Camila has passed, summa cum laude, staying very busy as an in-demand side musician, working with the likes of Ryan Keberle, Fabian Almazan, Aaron Goldberg, Sachal Vasandani, and many others. On February 26, 2016 Sunnyside Records proudly releases Camila Meza's debut recording for the label (and her fourth overall), Traces, produced by Matt Pierson and featuring Shai Maestro, Matt Penman and Kendrick Scott, with special guests Bashiri Johnson, Sachal Vasandani and Jody Redhage.

At the inception of creating and crafting the music on Traces, Meza had a vivid dream of a seashore full of colorful, precious stones, each of them with their own size and particular design. She wandered through this beauty, wanting to carry every stone back home with her. But then she looked closer, and decided to take only the ones that she really loved, those that made her feel something special. "This dream was the beginning of my journey to the core of myself, getting closer to what moves me, accepting my own truth and embracing my intuition. This album represents the path traced, the moments, hopes and melodies that have marked my journey," said Meza. Traces is comprised of eight new original compositions, plus "Green Finch and Linnet Bird" (Sondheim), "Amazon Farewell" (Djavan), "Luchin" (Victor Jara) and "Little Person" (Jon Brion).

A songbird takes flight . . . Traces opens with the Meza composition, "Para Volar," on which she sings these words in Spanish (she also sings beautifully in English): "let the wind take you, fly free until you find truths with no fear or time, freedom in its essence, let the wind take you, fly and dream again." Camila writes about a failed attempt to rescue an injured bird, but these sentiments also speak of new beginnings, and of embracing your dreams. Traces was born from her joyous journey from a young, accomplished musician in Chile (inspired by Wes Montgomery, George Benson, Pat Metheny, Led Zeppelin, Ella Fitzgerald, Jimi Hendrix, Bjork, Elis Regina and Chet Baker), to becoming part of a new generation of adventurous jazz musicians in New York who are fearlessly imposing their disparate influences and experiences on jazz, with glorious results.

Up next is Camila's wonderful duet with vocalist Sachal Vasandani, "Away," also featuring Jody Redhage on cello. Camila and Sachal sound as if they were born to sing together, and the sparks fly on this song about how romantic love can come and go, but true love doesn't fade away, but transforms into something else in our lives.

The title track, "Traces," expresses themes of finding space and beauty, especially as a respite from city life. Also, how small, conscious acts can change your life and make the world a better place. Or, as Camila sings, "It's a blessing to do little things and feel that they can change the world around." This song, and "Away," also features some of Camila's most compelling guitar solos on the album.

Camila was moved to sing Djavan's "Amazon Farewell" from Betty Carter's powerful version of the song performed at The Nice Jazz Festival. Camila and her band offer up their own robust version on which you can feel how much the lyrics resonate with Camila. She elaborates, "I remember I couldn't stop watching this video of Betty after I discovered it, she absolutely inspired me to no end, and it was exactly what I needed at that moment. I think it's important to address in my music the things I care about. In this case the injustices, the destruction of nature, and the unconsciousness towards native people."

"Mar Elastico" is dedicated to Camila's loved ones. "This song conjures up imagery and memories of afternoon games with my sisters, an orange light following their steps. There's this idea of brief meetings, telling each other where we're going, but then their steps become larger and we're apart again. But after all, a realization of the elasticity of our relationships; that distance just makes us come back stronger when we meet again," said Camila.

Other highlights on Traces include the lullaby-like "Luchin," a beautiful, powerful Chilean song written by singer/songwriter Victor Jara, an emblematic figure in the history of Chile. This song represents the higher hopes of justice through the story of a little boy named Luchin living in harsh conditions; Sondheim's "Greenfinch and Linnet Bird" (from "Sweeney Todd"). "It felt very interesting to use a more contemporary Broadway song and do my own 'jazzier' treatment on it, with no reference of another version. The lyrics totally grabbed me, and it fit into the recurring theme of flying on this album, with the lyric, 'if I cannot fly, let me sing'", explained Camila; and "Little Person," the closing theme from the movie "Synecdoche New York" (starring the late Philip Seymour Hoffman), which Camila fell in love with for its beautiful heaviness.

On the breathtaking "Emerald," Meza sings, "I've decided to stay, stay in this open place, here's where my heart sings, here's where there's no mistake." Camila explains, "this was one of the last songs written for the album, and it became like a hymn about actually having found the place I was looking for; the openness, the reassurance, the freedom, the passion and love for what I am and what I do."

Throughout Traces Camila offers the listener a remarkable gift; her true self and her abundant talents, as expressed through these songs, with no less than luminosity, passion, honesty and love. 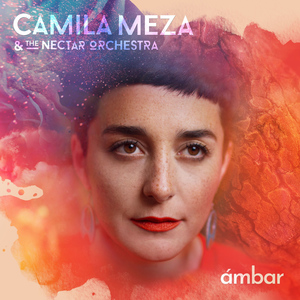