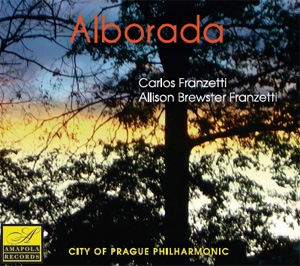 Internationally renowned pianist/composer/arranger Carlos Franzetti may very well be the greatest Renaissance man in music today, equally at home in the Latin, jazz, classical and popular genres. The versatile Argentine born artist has continually developed his very own sound since first settling in the United States in 1974. A multiple Grammy Award winner and nominee he has proven himself to be a grand collaborator, regardless the field of music, with instrumentalists ranging from Gato Barbieri, Paquito d'Rivera, Jon Faddis, Steve Kuhn and David Sanchez and vocalists Ruben Blades, Kid Creole, Chaka Khan, Laura Nyro, Mercedes Sosa and Marion Williams to myriad chamber groups and orchestras all over the world. On Alborada, the Spanish name for Dawn, Carlos Franzetti's singular talents as a pianist/conductor-composer/arranger truly come to light in the company of his most cherished partner, the highly acclaimed pianist Allison Brewster Franzetti.

Operating in the realm of what was once known as Third Stream, Franzetti merges musics, jazz and classical, into a global gumbo that is consistentlyflavored with the seasoning of his Latin heritage, thus taking the genre into new and exciting territory. Building upon the inventions of his predecessors, Duke Ellington, Gil Evans, John Lewis, Oliver Nelson, Claus Ogerman, Lalo Schifrin and Gunther Schuller, on Alborada he shows himself to be a groundbreaking innovator with a voice all of his own on a program of original compositions that in his words, "serve as musical tributes to several composers and musicians, including J. S. Bach, Maurice Ravel, Villa Lobos, Henri Dutilleux, Bill Evans, Herbie Hancock and Milton Nascimento, all of whom have influenced my music..." Performed with the City of Prague Philharmonic Orchestra, aided by Czech jazzmen, bassist Robert Balzar and drummer Jiři (George) Slaviček, the music comes to brilliant life.

The opening track "Mombasa" is Franzetti's homage to the South America of his birth's most famous writer, Gabriel García Márquez, the African city of its title being the inspiration for the fictional town of Macondo described in the author's masterpiece One Hundred Years of Solitude. Appropriately, the composer's jazzy cumbia is a reflection of Márquez's Colombianheritage. Opening with a short rhythmic clave played by the piano, the piece builds dynamically with the orchestra, conducted by Brewster Franzetti, driven by Slaviček's drums. The work's parallel movement of minor chords suggests a cinematographic atmosphere reminiscent of the composer's celebrated soundtrack work

Franzetti composed "Illuminata" (an homage to 20th Century French composer Henri Dutilleux) for his wife Allison, an award winning pianist in her own right. The orchestra, conducted by Carlos (the couple alternate places between the keyboard and podium throughout) opens the piece ominously with low bassoons, the mood lightening with the entrance of woodwinds and strings. The piano improvisation develops gradually over a constant bolero beat by a somewhat continuous thematic growth, undergoing minute modifications from the orchestral textures.

"Mirage" – with Franzetti adding Fender Rhodes to his piano -- hearkens back to the composer's arrival in New York City at the height of the seventies' jazz fusion era and reflects the composer's varied influences of the period, from Herbie Hancock and Steely Dan to Creed Taylor and Quincy Jones. The distinctive melding of a funky feel and orchestral music, one that Franzetti so successfully explored on his own recording from the time, Graffiti, remains today a refreshing aspect of his art.

The beautifully stirring "Pasacaglia" is compositionally Franzetti most classically structured piece of the date. Built over a bass ostinato in an alluring 5/4 rhythm, as opposed to 17th Century musical form's more commonly utilized 3/4 meter, it is performed splendidly with Brewster Franzetti at the piano.

"Iguazú" – inspired by Franzetti's excursion to the captivating Iguazú Falls in the Misiones district of Argentina -- evokes the vision and power of the endless streams of water of his native country's national treasure. Appropriately the piece is constructed upon his homeland's milonga rhythm over which his superb piano solo flows naturally, suggesting the surge of the title's waterfalls.

The jazz ballad "Song Without Words" is a feature for Franzetti's piano. He says of his performance, "My main concern was to play a solo without interfering with the orchestral commentaries," thus confirming Jazz Times' Thomas Conrad's appraisal in a review of the composer's The Jazz Kamerata, that he "understands the way to achieve synergies between the classical and jazz genres is not to blend them, but to creatively juxtapose them."

The title track "Alborada" was composed by Franzetti as a vehicle for Allison Brewster Franzetti's excellent piano technique. He notes, "This neoclassical piece was conceived after Ravel's Concerto in G with a B section that develops into a medium jazz tempo very much reminiscent of Bill Evans."

"Serenata" is probably Franzetti's most well known composition, previously performed and/or recorded by Paquito d'Rivera, Danilo Perez and Imani Winds. Incorporating elements of Latin American music, including milonga, chorinho and Cuban danzas, in conjunction with Bach inspired counterpoint, it was the first work of the composer's to be performed by Brewster Franzetti, who here reprises the piece with sparkling assurance.

The concluding "For Ever Milton," as the title implies, is dedicated to Milton Nascimento, another of Franzetti's many musical heroes. The composer returns to the piano for the disc's finale skillfully playing the piece, which has two contrasting sections that express a full range of emotions, from melancholy to joy.

Despite countless awards and commendations over a career spanning nearly half a century, Carlos Franzetti remains a relatively well kept musical secret, heretofore receiving nowhere near the public recognition that his enormous talent deserves. As a pianist and composer his abilities tower over many of the more famous. On Alborada once again his music shines brightly, to be heard by an audience that hopefully begins to see the light.