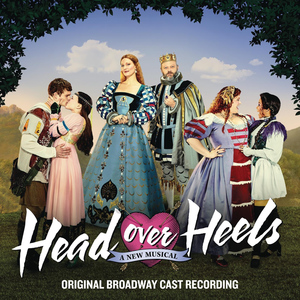 The producers of Head Over Heels, the new musical comedy featuring the iconic songs of The Go-Go's – the most successful female rock band of all time, and Sony Masterworks Broadway today release The Original Broadway Cast Recording.  Included in the 20-track cast album is a true bonus from The Go-Go's themselves: an exclusive new recording of one of the band's most popular songs, "This Town," which marks their first studio recording in more than 17 years since their album God Bless The Go-Go's (2000). The track, produced by Scott Sigman, was recorded exclusively for the Broadway collection by members Charlotte Caffey, Belinda Carlisle, Gina Schock, Kathy Valentine and Jane Wiedlin.  The album is produced by Scott M. Riesett and Tom Kitt with co-producers Louise Gund and Christine Russell, engineered by Isaiah Abolin and Lawrence Manchester, and was recorded at the DiMenna Center in New York City on August 26-28.

Head Over Heels is now playing on Broadway at Hudson Theatre (141 West 44th Street). Head Over Heels began preview performances on Saturday, June 23 and officially opened on Thursday, July 26, 2018. Head Over Heels has been lauded by Time Out New York as "a saucy & boisterous celebration" and heralded by New York Magazine as "a clever, delightful, bubbly, exuberant party!"

Head Over Heels features 18 of The Go-Go's iconic hit songs including "We Got the Beat," "Get Up and Go," "Cool Jerk," "Vacation," "Our Lips Are Sealed," "Lust to Love," "Head Over Heels" and Belinda Carlisle's solo hits "Mad About You"  and "Heaven is a Place on Earth."

A hilarious, dazzling celebration of love, Head Over Heels follows the escapades of a royal family on an outrageous journey to save their beloved kingdom from extinction. You'll meet a king about to lose his throne, a queen about to lose her inhibitions, and two princesses about to find love. It's a modern musical fairy tale where once upon a time is right now. Head Over Heels is "a stirring reminder of why theater matters," according to BuzzFeed's Louis Peitzman.

Scott M. Riesett (Cast Album Producer) has spent his career producing and engineering music for records, television and film, recently producing the music for NBC's "Rise," NBC's "Hairspray Live!" and, before that, Fox's "Grease: Live" and NBC's "Smash." Through his collaborations with film and Broadway composer and songwriter Marc Shaiman, he recently worked on the upcoming Mary Poppins Returns, as well as co-produced Mariah Carey's Golden Globe-nominated "The Star" and produced Bette Midler's It's The Girls. Broadway cast albums for Shaiman have included both the Broadway and West End releases of Charlie and the Chocolate Factory, as well as Catch Me If You Can. Scott's other recent Broadway cast albums include SpongeBob SquarePants, featuring songs from David Bowie, John Legend, Aerosmith, Lady Antebellum, Cyndi Lauper and others, as well as the stage production of Disney's Freaky Friday.  Additional film and TV credits include producing the score for Rob Reiner's recent LBJ, the title song for Todd Solondz's Wiener-Dog, and music for the penultimate "musical episode" of USA Network's "Royal Pains." Scott has had the pleasure of working with musician, singer and actor Harry Connick, Jr. for almost a decade and has contributed engineering to many of his albums, including 2015's That Would Be Me.  Over his 20+ years in the music industry, Scott has worked with a wide and varied group of artists, including Ariana Grande, Jennifer Hudson, Boyz II Men, Carly Rae Jepsen, Vanessa Hudgens, Jessie J, DNCE, Nick Jonas, John Mayer, Emily Blunt, Lin-Manuel Miranda, Leslie Odom Jr., Martin Short, Kristin Chenoweth, Bernadette Peters, Liza Minnelli, Anjelica Huston, Uma Thurman, Christian Borle, Kelli O'Hara, Jane Krakowski and Nathan Lane.

Louise Gund (Cast Album Co-Producer; Producer, Head Over Heels) received a Tony Award for Best Play for All The Way.  Other Broadway productions include Sweat, Fiddler on the Roof, Six Degrees of Separation, and Sylvia.  Louise is also committed to not-for-profit theatre.