Hailed by the New York Times at their Carnegie Hall debut as "invariably energetic and finely burnished… playing with earthy vigor" the Catalyst Quartet, prize winners of the Gianni Bergamo Classical Music Award 2012 (Switzerland) is comprised of top Laureates and alumni of the internationally acclaimed Sphinx Competition.

The Catalyst Quartet's debut album, The Bach/Gould Project, featuring their own arrangement of J.S. Bach's Goldberg Variations and Glenn Gould's String Quartet can be found on the Azica Records label. They are also featured on the album STRUM, the string works of quartet violinist Jessie Montgomery (available fall 2015). The Catalyst Quartet proudly endorses Pirastro strings. www.pirastro.com. Here are member BIOS.

Karla Donehew-Perez - Violin
Born in Puerto Rico, Karla began playing the violin at age three. By age nine she had performed as a soloist with the Puerto Rico Symphony Orchestra, and shortly after that was featured on a national television show about young gifted Latin American children. She was the youngest member of Festival Orchestra Juvenil de Las Americas during the Casals Festival.  At age twelve, Karla moved to California and entered The Crowden School, a middle school with a focus on string chamber music. She continued her studies with Anne Crowden, Director and founder of The Crowden School.

Karla completed her Bachelors and Masters degrees at the Cleveland Institute of Music, studying performance with the heralded violin teachers Paul Kantor, David Cerone, and William Preucil. As a student at CIM, Karla participated in numerous Master Classes with distinguished artists, and served as the CIM Orchestra's concertmaster. As a member of the WO-MEN String Quartet, she was awarded 1st place at the Ohio String Teachers Association Competition, and Honorable Mention at the Plowman Chamber Music Competition. The quartet was also chosen to represent CIM for the Conservatory Project at the Kennedy Center for the Arts and was selected to play a recital for the Cleveland Chamber Music Society. In her junior year, Karla was a recipient of the prestigious Dr. Jerome Gross Award in violin. Karla was also awarded second place at the Sphinx Competition. Karla was featured on the Young Artist Series for the Festival del Sole, in Napa Valley, California, and was guest concertmaster of the Tucson Symphony Orchestra. Recently, Karla was a fellow at the New World Symphony, where she often sat concertmaster or principal second violin and performed as a soloist.

Karla performs on a fine violin by Charles and Samuel Thompson, London 1774, on generous loan from Patricia Press Nissen in memory of Alvera and Dudley Warner- Press, and a fine violin bow by Victor Fetique, from the Rachel Elizabeth Barton Foundation.

An avid chamber musician and collaborator, Jessie was a founding member of PUBLIQuartet, an ensemble made up of composers and arrangers, featuring their own music as well as that of other New York based composers. She was also a core member of the Providence String Quartet from 2004 – 2009, quartet in residence of Community MusicWorks.   Ensemble experiences have lead to collaborations with The Orion String Quartet, The Miro String Quartet, and The Knights.  Jessie has also collaborated with several avante-garde greats such as clarinetist Don Byron, Butch Morris.

Since 1999, Jessie has been affiliated with The Sphinx Organization, which supports the accomplishments of young African-American and Latino string players. Since her involvement with Sphinx, Jessie has been a two-time laureate in their annual competition, was Concertmaster of their 2009 national tour, served on the faculty of the Sphinx Performance Academy, and is a member of the Catalyst Quartet.

In 2011-2012, Jessie was the Van Lier Composer Fellow at the American Composers Orchestra, with performances of her works for small ensemble showcased throughout New York City in the SONiC Festival, and the Composers OutFront! Series.  She was in Residence at the Deer Valley Music Festival under the direction of American composer Joan Tower in 2008, and was also the two-time recipient of the Composer's Apprentice Award given by the Chamber Music Society of Lincoln Center.  She has served as resident composer for the Providence String Quartet, with performances throughout the Providence and Boston areas.  Her music has been premiered by the Vinca Quartet, Providence String Quartet, JACK Quartet, Catalyst Quartet, and members of the International Contemporary Ensemble.

Paul Laraia - Viola
A premiere talent of his generation, violist Paul Laraia has appeared in recent seasons as soloist with the Pittsburgh Symphony, the Atlanta Symphony Orchestra, the Nashville Symphony, and the New Jersey Symphony Orchestra.  He regularly performs solo recitals and chamber music throughout the United States, Canada, Europe, and Asia.

Born in Sewell New Jersey, Paul began viola with Brynina Socolofsky, the disciple of viola pedagogue Leonard Mogill. He continued his studies with Choon-jin Chang, and Che-hung Chen of the Philadelphia Orchestra under scholarship through Temple University's Center for Talented Youth and the Settlement Music School in South Philadelphia. In 2007, he entered the New England Conservatory of Music under Kim Kashkashian with full scholarship and in 2008 he became the recipient of the Clara May Friedlaender Scholarship.

Since 2011, Mr. Laraia has been appearing as a member and principal of the highly acclaimed Sejong Soloists ensemble, based in New York city and Seoul, South Korea.  With Sejong Paul has performed and recorded chamber music and String Orchestra masterpieces with some of today's brightest emerging and established soloists such as Paul Huang, Stephan Milenkovich, Gil Shaham, Vadim Repin, and Cho-liang Lin.

Paul regularly performs with his two younger siblings Steven and Tiffany who also play viola.  Steven studies with Kim Kashkashian at the New England Conservatory, and Tiffany studies at The Juilliard School of Music under Toby Appel.

Karlos Rodriguez - Cello
Cellist Karlos Rodriguez made his orchestral debut at the age of thirteen to great audience and critical acclaim. As an advocate for multifaceted musical diversity in the 21st century, he is an avid soloist, recitalist, chamber musician, clinician, recording artist, and administrator. Having appeared at many of our important musical venues including Carnegie Hall, Avery Fisher Hall, Alice Tully Hall, the Kennedy Center for the Performing Arts, the New World Center, Philadelphia's Kimmel center, and Radio City Music Hall, to name a few. Mr. Rodriguez has also had the honor of working with distinguished artists such as the Beaux Arts Trio, American, Cavani, Cleveland, Emerson, Guarneri, Juilliard, Miami, Orion, Tokyo, and Vermeer String Quartets; Janos Starker, Lynn Harrell, Zuill Bailey, Pieter Wispelway, Rachel Barton-Pine, Awadagin Pratt, Joshua Bell, and Steven Isserlis. His teachers have included Richard Aaron, Peter Wiley, and David Soyer. A love of modern dance paired with live music has led to collaborations with the Thomas/Ortiz Dance Company, Freefall, Mark Morris Dance Group, and Chita Rivera. Karlos has attended and been a guest artist at the ENCORE School for Strings, Sarasota, Aspen, Great Lakes and Kneisel Hall chamber music festivals, Grand Canyon Music Festival, Cleveland Chamber Music Society, strings Music Festival, Philadelphia Orchestra Chamber Music Society, and Napa's Festival del Sole. As an educator he is on the faculty of Summertrios, the Dean of Artistic Affairs at the Sphinx Performance Academy and has given master classes domestically and abroad. Mr. Rodriguez has worked on various films, Pop albums, Broadway musicals, and is a member of the Radio City Music Hall Orchestra. In addition to these musical activities he is former Principal Cellist of the Florida Grand Opera Orchestra in Miami and cellist of the Catalyst Quartet. 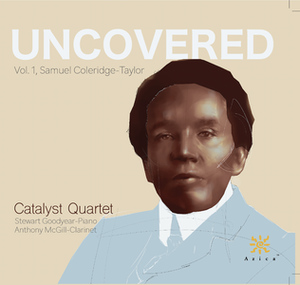 On Friday, February 5, 2021, GRAMMY Award-winning Catalyst Quartet releases UNCOVERED Volume 1 on Azica Records. The first of a multi-volume set, Volume 1 features the works of Samuel Coleridge-Taylor including his Quintet in G minor for Pianoand Strings with pianist Stewart Goodyear, Fantasiestück, and Quintet in F sharp minor with clarinetist Anthony McGill.

UNCOVERED Volume 2 will feature the works of Florence Price and Volume 3 and beyond will feature Coleridge-Taylor Perkinson, William Grant Still, and George Walker among others.

Catalyst Quartet poses, "Over the course of time there have been many overlooked artists in classical music, especially because of their race or gender. It is important to acknowledge that we have not yet heard the whole story due to this sidelining of musical voices. Composers like Samuel Coleridge-Taylor, Florence Price, and Coleridge-Taylor Perkinson have contributed beautifully crafted work to the repertoire but are not widely celebrated because quality recordings and performances of their music are rare or non existent. With our next recording project we are helping to change this unfortunate reality."