Winner of the silver medal and Krystian Zimerman prize for best performance of a sonata at the International Piano Competition in Warsaw Frederic Chopin in 2015, Charles Richard-Hamelin stands out today as one of the pianists most important of his generation. It also got the second prize at the Montreal International Musical and third prize and special prize for best performance of a Beethoven sonata at the Seoul International Music Competition in South Korea. Prix ​​d'Europe 2011 and Radio-Canada Revelation 2015/16, he was recently awarded the prestigious Career Development Award offered by the Women's Musical Club of Toronto.

Originally from the Lanaudière region of Quebec, Charles Richard-Hamelin studied with Paul Surdulescu, Sara Laimon, Boris Berman and André Laplante. He received his bachelor's degree at McGill University in 2011 and his master's degree at the Yale School of Music in 2013 and received a full scholarship in both institutions. He also obtained a Diploma of Artist at the Montreal Conservatory of Music in 2016 and is currently studying with pianist Jean Saulnier. His first solo CD, devoted to recent works by Chopin, was published in September 2015 under the Analekta label and has received praise from critics worldwide (Diapason, BBC Music Magazine, Le Devoir).

"The fundamental qualities we have always identified with this pianist remain. A real sound, which comes from the whole body, a wide range of touch and a true poetic sense With the freedom and lapping, which settles now c is the relevance of a speech, a real subject. [...] Everywhere, the outfit is impeccable. by holding, I hear the architectural design and the emotional journey of a work, reports tempos and atmospheres, dynamic terracing. added to this is, where it should be, an acute sensitivity to the art of transitions. that's what made him score points in Warsaw and this is what precisely " feeds "the viewer and gives the impression of an experience, especially in the Third Sonata." - Christophe Huss, Le Devoir (27 November 2015)

"I was waiting for such a performance since the start of the competition. It is at any point of view an artist, an extraordinarily mature musician who focuses on the beauty of the works of Chopin, he plays with great clarity vision. It is one of the few competitors who managed to find a sensible balance between the spirit of Chopin and his own individuality, as we heard in its interpretation of the Ballade in a flat major. " - Róża Światczyńska, Polish Radio 2 (7 October 2015)

"Richard-Hamelin seems aware of Chopin's entire way - not only Based line after line of his famous melodies, but by exposing the inner voices and harmonic surprises in both hands, illuminating the structural complexity of the work, all particularly in the Third Sonata, which will complete the program. Richard-Hamelin has carried his audience with the sweet languor of his game at a time and with its always musical technical prowess to another. He is an artist clearly on a unique and original way . "
Robert Harris, The Globe and Mail (January 17, 2016)

"The winner of the second prize Charles Richard-Hamelin also received strong well deserved applause for his performance of the Sonata no. 3 in B minor, op. 58 Chopin. It was so well executed that it is impossible not be amazed that he finished second. "
Julie Jackson, The Korea Herald (3 February 2016)

"The sophisticated play of Charles Richard-Hamelin was demonstrated in emotional depth interpretation of the Ballade in A flat major." - John Allison, The Telegraph (October 22, 2015)

"Charles Richard-Hamelin finished the semifinals with a superb concert in which he seemed to follow his hands as a child after a butterfly. After a beautiful rendition of" Pour le Piano "by Debussy and Scriabin very imaginative, he interpreted the 3rd Chopin sonata with opulence and incredible ease. he transmits his love for the instrument. " - Lev Bratishenko, Montreal Gazette (1 June 2014)

"The 26 years in Joliette it reveals all the qualities of a major pianist and, through often quite personal rubato, a real approximation of the legendary performers of this music." - Claude Gingras, La Presse (8 July 2010)

"Charles Richard-Hamelin intimately connected with the 2nd concerto by Rachmaninov and was able to transform the room breathtaking symphonic fantasy." - Laurence Vittes, The Huffington Post (6 June 2014)

"The tricky game, articulate and always stylistically appropriate to Richard-Hamelin has contributed greatly to the success of the delivery of the Mozart trio." - Jens Christian Hansen, Viborg Stifts Folkeblad (Denmark) (August 21, 2014)

"On the first evening stage of the final, he chose to interpret the Piano Concerto No. 2 in C minor, op. 18 Rachmaninoff.  With precision and using a nuanced palette, he led the audience on a journey brimming musicality, maintaining constant tension throughout the journey. in the adagio, the play of Charles Richard-Hamelin became softer, creating a crystalline melody. " Christine L. Lee, La Scena Musicale (October 2014 Vol. 20-2) 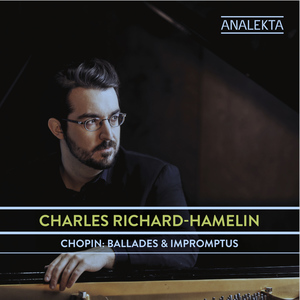 Chopin: Ballades & Impromptus, Charles Richard-Hamelin's fifth album on the Analekta label, is simply stunning. This complete edition of Frédéric Chopin's ballades and impromptus makes it possible to appreciate the exceptional playing of the pianist, as well as two important sides of the composer's work and that is the narrative impetus of his ballades and his talent as an improviser on the four impromptus.

Frédéric Chopin's ballades are the first instrumental works to bear this name, originally used to designate refined vocal pieces. Very free in form, all four present a similar psychological journey, in which tension will increase to a fiery coda. Written between 1831 and 1842, they testify to the evolution of Chopin's piano writing.