The West–Eastern Divan Orchestra is a youth orchestra based in Seville, Spain, consisting of musicians from countries in the Middle East, of Egyptian, Iranian, Israeli, Jordanian, Lebanese, Palestinian, Syrian and Spanish background.

It was founded in 1999 by the conductor Daniel Barenboim and academic Edward Said, and named after an anthology of poems by Goethe.

The Argentine-Israeli conductor Daniel Barenboim and the late Palestinian-American academic Edward Said founded the orchestra in 1999, and named the ensemble after an anthology of poems by Johann Wolfgang von Goethe. The first orchestra workshop was in Weimar, Germany, in 1999, after the organisation had received over 200 applications from Arab music students.Barenboim has also expressed interest in musicians from Iran (a non-Arab country but in conflict with Israel) and allocating three chairs for Iranian musicians to play in the orchestra each year.

The orchestra under Barenboim, in the presence of Italian President and Mrs. Giorgio Napolitano, performed for Pope Benedict XVI at the courtyard of the Apostolic Palace of Castel Gandolfo 11 July 2012, the abbot Saint Benedict of Nursia's (the founder of the Benedictines) feast day, and thus the name day of the Pope.

The West–Eastern Divan participated in the 9th Gwangju Biennale in 2012.

The orchestra, conducted by Barenboim, performed the complete Beethoven symphonic cycle at The Proms in July 2012 – the first time all nine symphonies were performed under a single conductor in a single Prom season since Henry Wood did so in 1942.

The aim of the West–Eastern Divan Orchestra is to promote understanding between Israelis and Palestinians and pave the way for a peaceful and fair solution of the Arab-Israeli conflict. Barenboim himself has spoken of the ensemble as follows:

"The Divan is not a love story, and it is not a peace story. It has very flatteringly been described as a project for peace. It isn't. It's not going to bring peace, whether you play well or not so well. The Divan was conceived as a project against ignorance. A project against the fact that it is absolutely essential for people to get to know the other, to understand what the other thinks and feels, without necessarily agreeing with it. I'm not trying to convert the Arab members of the Divan to the Israeli point of view, and I'm not trying to convince the Israelis to the Arab point of view. But I want to – and unfortunately I am alone in this now that Edward died a few years ago – ...create a platform where the two sides can disagree and not resort to knives."

One of the young musicians of the orchestra reinforced this point:

"Barenboim is always saying his project is not political. But one of the really great things is that this is a political statement by both sides. It is more important not for people like myself, but for people to see that it is possible to sit down with Arab people and play. The orchestra is a human laboratory that can express to the whole world how to cope with the other."

Daniel Barenboim, one of the outstanding musical figures of our time, was born in Buenos Aires to parents of Russian-Jewish descent. He began piano lessons at the age of five with his mother, continued musical studies with his father, and gave his first official concert in Buenos Aires when he was seven. In 1952, the family moved to Israel, and two years later his parents took Daniel to Salzburg to take part in Igor Markevitch's conducting classes. In 1955 and 1956, he studied harmony and composition with Nadia Boulanger in Paris.

Following his debut in Vienna and Rome in 1952, Barenboim soon became known as one of the most versatile pianists of his generation. Major debuts followed in Paris (1955), London (1956) and New York (1957), where he performed with Leopold Stokowski. His recording career began in 1954. In the 1960s, he set down the Beethoven concertos with Otto Klemperer, the Brahms concertos with Sir John Barbirolli, and, as both pianist and conductor, all the Mozart with the English Chamber Orchestra. Always active as a chamber musician, he performed most frequently with his late wife, cellist Jacqueline du Pré, and violinists Itzhak Perlman and Pinchas Zukerman. In song recitals, he has accompanied such artists as Dietrich Fischer-Dieskau, Dame Janet Baker, Jessye Norman, Thomas Quasthoff, Anna Netrebko, Rolando Villazón, Jonas Kaufmann and Magdalena Ko?ená.

From the mid-1960s, Barenboim began to devote more time to conducting. From 1975 to 1989 he was chief conductor of the Orchestre de Paris, with whom he often performed contemporary works by composers such as Lutosławski, Berio, Boulez, Henze, Dutilleux and Takemitsu. In 1973 he made his opera debut at the Edinburgh Festival and in 1981 his debut at the Bayreuth Festival, where over 18 consecutive summers he conducted Tristan und Isolde, the Ring, Parsifal and Die Meistersinger. In 1991, he succeeded Solti as music director of the Chicago Symphony and in 2006 was named "honorary conductor for life". In 1992, he became general music director of Berlin's Deutsche Staatsoper, and in 2000, the Berlin Staatskapelle appointed him "chief conductor for life". He also appears regularly with the Berliner Philharmoniker and the Wiener Philharmoniker, with whom he led the 2009 and 2014 New Year's Concerts.

In 2007, Barenboim began a close relationship with the Teatro alla Scala in Milan, where he conducts opera and concerts as well as playing chamber music. In 2011 he was appointed music director of the legendary Milan institution. Both there and in Berlin, beginning in 2010, he has conducted Guy Cassier's new staging of the Ring (he also conducted the complete cycle with the Berlin Staatskapelle during the 2013 BBC Proms at London's Albert Hall). With the Orchestra Filarmonica della Scala his projects have included the Verdi Requiem in Milan and on tour to the Lucerne and Salzburg festivals and the Berlin Philharmonie, as well as at the Bolshoi Theatre in Moscow, where he also conducted Don Giovanni with the Scala forces.

In 1999, together with the late Palestinian-born writer and Columbia University professor Edward Said, Barenboim founded the West-Eastern Divan workshop and orchestra, bringing together talented young musicians from the Arab countries of the Middle East, Israel and Spain to make music under the guidance of some of the world's finest musicians, enabling dialogue between the various cultures of the Middle East. Musicians of the Berlin Staatskapelle have participated as teachers in the project since its inception. In summer 2005, the West-Eastern Divan Orchestra presented a concert of historic significance in the Palestinian city of Ramallah, which was telecast and recorded for DVD. Since then, Barenboim and the orchestra have toured extensively, including appearances at the festivals in Lucerne and Salzburg, the BBC Proms in London and making a debut in the United Arab Emirates. In June 2015 Barenboim celebrated the imminent opening of the future home of the Barenboim-Said Akademie in Berlin, an educational institution that will expand upon the vision of the West-Eastern Divan Orchestra. Barenboim also initiated a project for music education in the Palestinian territories, which includes a music kindergarten as well as a youth orchestra.

His passion for both opera and concert repertoire is reflected in his extensive diary of appearances for 2015/16, which includes Die Meistersinger, Traviata, Orfeo ed Euridice, Simon Boccanegra, Juliette, Trovatore and a Ring cycle, all in Berlin, Mahler in Vienna, a complete Bruckner symphony cycle in Japan. He also maintains his preeminence as a soloist (Schumann, Brahms, Beethoven and Mozart concertos in Berlin, London, Paris, Vienna and Japan) and recitalist (Berlin, Brussels, Stockholm, Amsterdam) and as a chamber musician, giving duo recitals with Martha Argerich in Paris and Vienna.

For his efforts towards reconciliation in the Middle East as well as his musical achievements, Barenboim has been the recipient of many prizes and honours, among them the titles of Grand Officier in France's Légion d'Honneur and Knight Commander of the British Empire (KBE), Germany's Grosses Verdienstkreuz mit Stern, Spain's Príncipe de Asturias Prize (jointly with Edward Said), Japan's "Praemium Imperiale" for art and culture, Israel's Wolf Foundation Arts Prize, the Evangelische Akademie's Tolerance Prize, the Buber-Rosenzweig Medal, Willy Brandt Prize, Ernst von Siemens Music Prize and Herbert von Karajan Music Prize. Fortune magazine named him on its list of "The World's 50 Greatest Leaders".

Barenboim's books include his autobiography A Life in Music (also published in German, French and Spanish), Parallels and Paradoxes (with Edward Said, also in French), Music Quickens Time (also in French, Italian, German and Spanish), An Orchestra Beyond Borders: Voices of the West-Eastern Divan Orchestra (with Elena Cheah), Dialogue sur la musique et le théâtre: Tristan et Isolde (with Patrice Chéreau; also in Italian) and La musica è un tutto (also in French). In 2014 Barenboim launched Peral, a download-only label, with recordings of Bruckner's first three symphonies recorded with the Staatskapelle Berlin. This was followed in July 2015 by a live recording of a legendary concert given by Barenboim, Martha Argerich and the West-Eastern Divan Orchestra in the Teatro Colón in their home city of Buenos Aires. In 2015 he unveiled a groundbreaking new piano, which he conceived and commissioned. 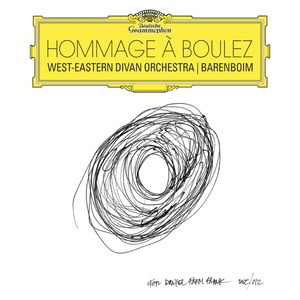 Anyone privileged enough to have witnessed the close relationship between Pierre Boulez and Daniel Barenboim, whether in rehearsal, in performance or backstage, will know of the profound respect and admiration that flowed freely between them. A new album from Deutsche Grammophon, scheduled for international release on 24 March 2017, celebrates the French composer's legacy as one of the most influential musicians of the past sixty years. Hommage à Boulez includes a selection of seminal works performed live by Barenboim's West-Eastern Divan Orchestra as well as Le Marteau sans maître, given under the composer's direction during his eighty-fifth birthday concert at Berlin's Staatsoper Unter den Linden in 2010. The two-disc set underlines the power of an artistic and personal friendship that flourished from the moment Barenboim and Boulez first worked together in June 1964 until the composer's death last year.