The greatly talented Israeli pianist and conductor, Daniel Barenboim, was born in Argentina to parents of Jewish Russian descent. He started piano lessons at the age of five with his mother, continuing to study with his father who remained his only other teacher. In August 1950, when he was only seven years old, he gave his first official concert in Buenos Aires. Important influences in his development as a musician included Artur Rubinstein and Adolf Busch, both of whom performed in Argentina. The Barenboim family moved to Israel in 1952.

Two years later, in the summer of 1954, the parents brought their son to Salzburg to take part in Igor Markevitch's conducting classes. During that same summer he also met Wilhelm Furtwängler, played for him and attended some of the great conductor's rehearsals and a concert. Wilhelm Furtwängler subsequently wrote a letter including the words, "The eleven year-old Barenboim is a phenomenon …" that was to open many doors to Daniel Barenboim for a long time afterwards. In 1955 the young Daniel Barenboim studied harmony and composition with Nadia Boulanger in Paris.

Daniel Barenboim made his debut as a pianist in Vienna and Rome in 1952, in Paris in 1955, in London in 1956 and in New York in 1957 with Leopold Stokowski conducting the Symphony of the Air. From then on, he made annual concert tours of the USA and Europe. He toured Australia in 1958 and soon became known as one of the most versatile pianists of his generation.

Daniel Barenboim made his first gramophone recordings in 1954 and soon began recording the most important works in the piano repertory, including complete cycles of the piano sonatas of W.A. Mozart and L.v. Beethoven and concertos by W.A. Mozart, L.v. Beethoven (with Otto Klemperer), Johannes Brahms (with John Barbirolli) and Béla Bartók (with Pierre Boulez).

During the same period, Daniel Barenboim began to devote more time to conducting. His close relationship with the English Chamber Orchestra, kindled in 1965, lasted over a decade, during which time they performed frequently in England, with Barenboim as both conductor and pianist, and made tours all over Europe, to the USA and Japan, Australia and New Zealand.

Following his début as a conductor with the New Philharmonia Orchestra in London in 1967, Daniel Barenboim was in demand with all the leading European and American symphony orchestras. Between 1975 and 1989 he was Music Director of the Orchestre de Paris, his tenure marked by a commitment to contemporary music, with performances of works by Lutoslawski, Luciano Berio, Pierre Boulez, Henze, Henri Dutilleux, Takemitsu and others.

Daniel Barenboim has always been active as a chamber musician, performing with, among others, his late wife, cellist Jacqueline du Pré, as well as with Gregor Piatigorsky, Itzhak Perlman and Pinchas Zukerman. He has also accompanied Dietrich Fischer-Dieskau in lieder recitals.

Daniel Barenboim made his opera conducting début in 1973 with a performance of W.A. Mozart's Don Giovanni at the Edinburgh International Festival. He made his Bayreuth début in 1981 and has been a regular visitor there ever since, conducting Tristan und Isolde, Der Ring des Nibelungen, Parsifal and Die Meistersinger.

In 1991 Daniel Barenboim succeeded Sir Georg Solti as Music Director of the Chicago Symphony Orchestra, with which he has since enjoyed countless successes in all the world's great concert halls. In 1992 he became General Music Director of the Deutsche Staatsoper Berlin. He currently holds both posts. He has also had a long and distinguished association with the Berliner Philharmoniker and maintains a close relationship as well with the Vienna Philharmonic, with which he toured the USA, Paris and London in 1997.

Daniel Barenboim is a prolific recording artist and has made recordings since 1954 for Westminster, EMI, Deutsche Grammophon, Decca, Philips, Sony Classical (CBS Masterworks), BMG, Erato Disques and Teldec. He now records exclusively for Teldec, which has issued solo recordings and albums in which he conducts the Berliner Philharmoniker, the Chicago Symphony Orchestra and the Staatskapelle Berlin.

In addition, Daniel Barenboim's best selling recording of Argentinian tangos, Mi Buenos Aires Querido: Tangos Among Friends in collaboration with Rodolfo Mederos and Héctor Console was released in 1996 to great acclaim. His Tribute to Ellington with Diane Reeves, Don Byron and Chicago-based jazz musicians was released in autumn 1999 for the centenary of Ellington's birth. Summer 2000 sees the release of his latest crossover project; Brazilian Rhapsody, an album of Brazilian popular music arranged by Bebu Silvetti and featuring Daniel Barenboim with Brazilian music legends, Milton Nascimento and Cyro Baptista.

Musicians are by definition communicators. In their performances and with their unique interpretation of the music they convey the style and the meaning of a work to their audience. Daniel Barenboim's incisive intelligence, exceptional technique and meticulous musicianship have been at the core of many definitive performances and recordings as both pianist and conductor. He has also succeeded in building a variety of other bridges:

1) A Jew born during the Second World War - and an Israeli by nationality - he has worked closely over many years with three German orchestras - the Berliner Philharmoniker, the Staatskapelle Berlin and the Bayreuth Festival Orchestra - in an atmosphere of mutual affection and respect.

2) When it comes to music education Mr. Barenboim, himself the father of two teenaged boys, is keen to draw young people to music. He was closely involved in the planning of the Chicago Symphony Orchestra's new interactive music learning center, ECHO, which opened in September 1998. ECHO is the first facility of its kind in the world that permits children of all ages to explore jazz, blues, gospel, rap, folk, pop and ethnic music – as well as classical – through interactive technology and special exhibits.

3) In the early 1990's, a chance meeting between Mr. Barenboim and the Palestinian-born writer and Columbia University professor Edward Saïd in a London hotel lobby led to an intensive friendship that has had both political and musical repercussions. These two men, who should have been poles apart politically, discovered in that first meeting, which lasted for hours, that they had similar visions of Israeli/Palestinian possible future co-operation.

They decided to continue their dialogue and to collaborate on musical events to further their shared vision of peaceful co-existence in the Middle East. This led to Mr. Barenboim's first concert on the West Bank, a piano recital atthe Palestinian Birzeit University in February 1999, and to a workshop for young musicians from the Middle East that took place in Weimar, Germany, in August 1999.

The West-Eastern Divan Weimar ‘99 Workshop took two years to organise and involved talented young musicians between the ages of 14 and 25 from Egypt, Syria, Lebanon, Jordan, Tunisia and Israel. The idea was that they would come together to make music on neutral ground with the guidance of some of the world's best musicians. Weimar was chosen as the site for the workshop because of its rich cultural tradition of writers, poets, musicians and creative artists and because it is the 1999 European cultural capital. Daniel Barenboim wisely chose two concertmasters for the orchestra, an Israeli and a Lebanese. There were some tense moments among the young players at first but, coached by members of the Berliner Philharmoniker, the Chicago Symphony Orchestra and the Staatskapelle Berlin, and following master classes with the cellist Yo-Yo Ma and nightly cultural discussions with Saïd and Barenboim, the young musicians worked and played in increasing harmony.

4) Barenboim has reached out, both in relation to his audiences and to opening himself up to new musical experiences. He has programmed contemporary works alongside repertoire from the classical and romantic eras. He has also expanded his repertoire to include African American music, Argentinian tango, jazz and Brazilian music and shared these experiences with his audiences.

His 1995 performance and recording of Hannibal Lokumbe's African Portraits with the Chicago Symphony Orchestra, gospel singer Jevetta Steele, blues singer David ‘Honeyboy' Edwards, the Hannibal Lokumbe Quartet and three African American choruses is one example. His recording of Argentinian tangos, Mi Buenos Aires Querido: Tangos Among Friends is another. Barenboim and his fellow musicians later performed this repertoire in several North American and European cities. Tribute to Ellington, his foray into jazz, and Brazilian Rhapsody further demonstrate Barenboim's inexhaustible musical curiosity and his conviction that music should bring people together.

In 2000 the music world celebrated the 50th anniversary of Daniel Barenboim's performance début with major musical events in Berlin, Chicago, New York - and on the actual anniversary, August 19 - Buenos Aires. Always looking to the future, the indefatigable musician has also recorded for release in his anniversary year his first L.v. Beethoven symphonies cycle, both for CD and the new DVD Audio technology. Also in 2000, the Staatskapelle Berlin elected Daniel Barenboim chief conductor for life. 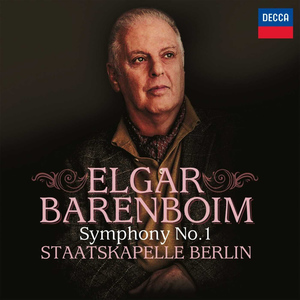 Daniel Barenboim and the Staatskapelle Berlin Record Elgar's Symphony no. 1 for Decca. For their second album featuring the music of Edward Elgar, Daniel Barenboim and the Staatskapelle Berlin have recorded the composer's first symphony, following a recording of his second symphony two years ago. "I hold that the symphony without a program is the highest development of art." With these words, spoken in a University of Birmingham lecture in 1905, Elgar declared himself as belonging to the Brahmsian tradition of the abstract symphony, already thought moribund by many, rather than allying himself with Richard Strauss, the modern master of the symphonic poem.