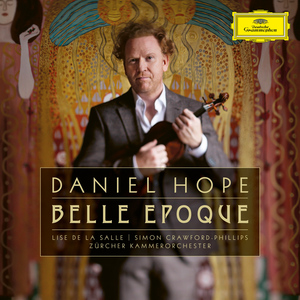 ·       Album includes a recording of a new transcription of Chausson's Concerto in D major, a neglected masterpiece for violin, piano and string orchestra

·       Hope joins forces with his Zürcher Kammerorchester and close friends in performances that reveal hidden depths of works by a wide range of composers including Debussy, Ravel, Elgar, Rachmaninov, Massenet, Berg and Schoenberg

It was the age of the Lumière Brothers, Alexander Graham Bell, Karl Benz, the Wright Brothers and Louis Blériot, Marie Curie and Louis Pasteur – an age not unlike our own, marked by rapid scientific and technological development as well as intense literary, artistic and musical activity. The Belle Époque, the period between the end of the Franco-Prussian War in 1871 and the outbreak of World War One in 1914, was a time of apparent peace and prosperity but with a darker reality of social and economic deprivation lying not far beneath its gilded surface. This era of creativity and contradiction has long fascinated Daniel Hope: "I often wish I had a time machine to go back to the salons of Paris, indeed to that entire age," he says.

Belle Époque– Hope's 17th recording for Deutsche Grammophon – offers a panoramic snapshot of the music that came out of this world, capturing its mix of late-Romantic, Impressionist and Modernist styles. The violinist's double album places popular repertoire by Massenet, Debussy and Elgar alongside rarely heard miniatures by Rachmaninov, Charles Koechlin, Frank Bridge and members of the Second Viennese School.

"It was a time when people started to question the very idea of art," Hope explains. "Where did it come from, what was it allowed to say, what were its values and what should or could it express?" Composers, while still drawing on models from the past, were experimenting with new techniques and sonorities and, as time went on, began to reflect the underlying tensions of a world that was about to be swept away by war.

At the heart of the album is Ernest Chausson's Concerto in D major for violin, piano and string quartet, a little-known yet compelling work recorded here in a new transcription for the two soloists with an increased string orchestra. Hope is joined by members of the Zürcher Kammerorchester, of which he has been Music Director since 2016, and pianist Lise de la Salle. "I find the piece encapsulates so much of that period," he comments, "the sensual tonality and yet this deep, almost nostalgic desire to revisit one's past."

Belle Époque features several other orchestral works including arrangements of Debussy's Rêverie and the "Méditation" from Massenet's opera Thaïs, Schoenberg's nostalgic Notturno for violin, harp and strings, and Elgar's exhilarating Introduction and Allegro for string quartet and orchestra. Daniel Hope also directs the Zürcher Kammerorchester and soprano Mojca Erdmann in Richard Strauss's song Morgen!, a reflection on the bliss of true love.

"I wanted the album to reflect what was happening throughout Europe: Art Nouveau, Secession, Jugendstil", Hope says. "These related trends were understood as a rejection of the traditional forms of the nineteenth-century ‘Gründerzeit'. A fresh, sensual art was to emerge, adhering closely to nature as a model and at the same time able to give visual expression to deep, concealed emotional states."

Partnered by pianist Simon Crawford-Phillips, Daniel Hope also explores the extraordinarily rich resource of Belle Époque chamber music. A sense of yearning for the certainties of the past flows through "Romance", one of two salon pieces for violin and piano composed by the young Rachmaninov, while the pursuit of the new can be heard in the sounds and silences of Webern's Four Pieces Op.7 (1910-14). Hope and Crawford-Phillips are joined by Stefan Dohr, principal horn of the Berliner Philharmoniker, in Charles Koechlin's Four Little Pieces for horn, violin and piano Op.32, and their chamber repertoire also takes in Hahn's Bach-inspired À Chloris, Kreisler's evergreen Liebesleid and pieces by Berg, Schoenberg, Zemlinsky and Enescu, as well as lesser-known gems by Fauré, Paul Juon, Bridge and Ravel.

Dissatisfied with what is now known as the Sonate posthume, Ravel suppressed the score. In fact the sonata, like so much of the music of the Belle Époque, looks to the past and future at once, to striking effect, with its haunting lyricism and unexpected harmonic shifts. "I'm aware that some people say Ravel was so exact and that he buried certain pieces and didn't want them discovered or performed," says Hope. "Nonetheless, I find the piece, just on the cusp of the new century, an exact and very moving representation of what Belle Époque stands for."

Daniel Hope is performing extensively in the first half of 2020, with concerts in France, Germany, Switzerland, the UK, Ukraine and the US. He and the Zürcher Kammerorchester will perform repertoire from Belle Époque at concerts on tour in Germany in the spring.