The violinist Daniel Hope has toured the world as a virtuoso soloist for 30 years and is celebrated for his musical versatility as well as his dedication to humanitarian causes. Winner of the 2015 European Cultural Prize for Music, whose previous recipients include Daniel Barenboim and the Berlin Philharmonic Orchestra, Daniel Hope appears as soloist with the world's major orchestras and conductors, also directing many ensembles from the violin. Since the start of the 2016/17 season Hope is Music Director of the Zurich Chamber Orchestra – and from the 2018/19 Season also Music Director of the New Century Chamber Orchestra in San Francisco.

In 2019 he became Artistic Director of the Frauenkirche Cathedral in Dresden, and from 2020 he is the President of the Beethovenhaus Bonn, an honorary position following in the footsteps of Kurt Masur and Joseph Joachim.

Daniel Hope was raised in London at Highgate School and the Royal Academy of Music, studying the violin with Zakhar Bron, Itzhak Rashkovsky and Felix Andrievsky. The youngest ever member of the Beaux Arts Trio with whom he performed over 400 times during its final six seasons, today Daniel Hope appears at all the world's greatest halls and festivals: from Carnegie Hall to the Concertgebouw Amsterdam, from Salzburg to Schleswig-Holstein and from Aspen to the BBC Proms and Tanglewood. He has worked with conductors including Kurt Masur, Valery Gergiev and Christian Thielemann, and with the world's greatest symphony orchestras including Berlin, Boston, Chicago, Paris, London, Los Angeles and Tokyo. Devoted to contemporary music, Hope has commissioned over thirty works, enjoying close contact with composers such as Alfred Schnittke, Toru Takemitsu, Harrison Birtwistle, Sofia Gubaidulina, György Kurtág, Peter Maxwell-Davies and Mark-Anthony Turnage.

Daniel Hope is one of the world's most prolific classical recording artists, with over 25 albums to his name. His recordings have won the Deutsche Schallplattenpreis, the Diapason d'Or of the Year, the Edison Classical Award, the Prix Caecilia, the ECHO-Klassik Award and numerous Grammy nominations. His album of Mendelssohn's Violin Concerto and Octet with the Chamber Orchestra of Europe was named one of the best of the year by the New York Times. His recording of Alban Berg's Concerto was voted Grammophone Magazine's "top choice of all available recordings". His recording of Max Richter's Vivaldi Recomposed, which reached No. 1 in over 22 countries is, with 250,000 copies sold, one of the most successful classical recordings of recent times. Hope has been an exclusive Deutsche Grammophon artist since 2007.

In 2017 the documentary film "Daniel Hope – The Sound of Life" was screened in European cinemas as well as in Movie Theatres in Australia and North America.

Daniel Hope has penned four bestselling books published in Germany by the Rowohlt publishing company. He contributes regularly to the Wall Street Journal and has written scripts for collaborative performances with the actors Klaus Maria Brandauer and Mia Farrow. In Germany he presents a weekly radio show for the WDR3 Channel and curates, since the 2016/17 season his own salon "Hope@9pm", a music and talk event with guests from culture and politics at the Konzerthaus Berlin.

Daniel Hope plays the 1742 "ex-Lipínski" Guarneri del Gesù, placed generously at his disposal by an anonymous family from Germany.

He holds both Irish and German citizenship and resides with his family in Berlin. 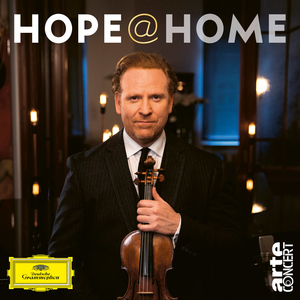 Violinist Daniel Hope spent his period of social distancing by performing chamber concerts online from his living room in Berlin with specially invited guests including Christoph Israel, Till Brönner, Matthias Goerne and more. Deutsche Grammophon is proud to present Hope@Home the album, a selection from this series of livestream events which attracted a combined audience of 2.5M viewers. Every track is live, one take only. As Hope says, "There were no patches or editing, no second takes. Sometimes life doesn't allow for second takes. This was my world for six magical and highly unusual weeks. I hope you enjoy listening."