"This violinist, now among the best in the world as well as the most thoughtful, is as brilliant at Bach as Birtwistle…" – The Observer, London

British violinist Daniel Hope has toured the world as a virtuoso soloist for many years. He appears as soloist with the world's major orchestras and conductors, directs many ensembles from the violin, and plays chamber music in a wide variety of traditional and new venues. He was also the youngest member of the Beaux Arts Trio during its final six seasons, and is celebrated for his musical versatility and creativity as well as his dedication to humanitarian causes. Born in South Africa and raised and educated in England, Hope earned degrees at the Royal Academy of Music, where he studied with distinguished Russian pedagogue Zakhar Bron.

Called "adventurous and brilliant" by the New York Times, Hope has been hailed by the London Observer as "the most exciting British string player since Jacqueline du Pré." A recent New York Times review summarized him as "a violinist of probing intellect and commanding style," and noted: "In a business that likes tidy boxes drawn around its commodities, the British violinist Daniel Hope resists categorization. Mr. Hope, a compelling performer whose work involves standard repertory, new music, raga, and jazz, emphasizes thoughtful engagement over flamboyant display. In his most personal undertakings, he puts classical works within a broader context – not just among other styles and genres but amid history, literature, and drama – to emphasize music's role as a mirror for struggle and aspiration."

Hope launched the 2014/15 season by giving the world premiere of Gabriel Prokofiev's Violin Concerto "1914" at the BBC Proms ("Hope, the instigator of this work, played its stratospherically high solo part with flawless accuracy." – The Independent). This season also sees the release of Hope's latest Deutsche Grammophon recording, Escape to Paradise, which draws on Hope's extensive research into those European composers – Erich Wolfgang Korngold, Miklós Rózsa, Hanns Eisler, and Franz Waxman among them – who, fleeing fascist persecution, relocated to Los Angeles, where they penned some of the 20th century's most iconic film scores. Recorded with conductor Alexander Shelley leading the Royal Stockholm Philharmonic and guest artists including vocalists Sting and Max Raabe, Hope's unprecedented new collection juxtaposes examples of the émigré composers' film and concert music with selections by those they influenced – like leading contemporary movie composers John Williams, Ennio Morricone, and Thomas Newman – in a nostalgic search for the quintessentially lavish "Hollywood sound."

Neither this spirit of investigation nor the Holocaust theme mark new territory for Hope, a musical activist whose commanding artistry goes hand in hand with a deep commitment to humanitarian causes. Ever seeking new and enlightening ways to share the music he loves, the violinist's previous projects include his award-winning, "sensitively made documentary" Refuge in Music (BBC Music) and Terezín/Theresienstadt, "an album that transcends criticism and must be heard" (Gramophone), both of which showcase works by composers murdered by the Nazis.

Highlights of the previous 2013/14 season included the Deutsche Grammophon release of Max Richter's Vivaldi Recomposed, which reached No. 1 in over 22 countries. On November 9, 2013, Hope commemorated the 75th anniversary of Kristallnacht with a special "Tu Was" ("Do Something!") concert for 12,000 at Berlin's Brandenburg Gate.

Hope is one of the world's most prolific classical recording artists with over 25 albums to his name. In September 2011, Gramophone declared: "The remarkable British violinist Daniel Hope is a force to be reckoned with." An exclusive Deutsche Grammophon artist since 2007, Hope has earned numerous Grammy nominations, a Classical BRIT award, the Deutsche Schallplattenpreis, and six German ECHO Klassik Prizes. In 2012 Hope released The Romantic Violinist: A Celebration of Joseph Joachim. The album celebrates the great 19th-century Austro-Hungarian violin virtuoso, who was a trusted collaborator of Brahms. The following year's Spheres album considers the idea first proposed by Pythagoras that planetary movement creates its own kind of music. This concept has fascinated philosophers, musicians, and mathematicians for centuries, and Hope offers his own vision, presenting pieces by composers as diverse as Bach, Gabriel Prokofiev, and Arvo Pärt. Hope's previous releases on the famed yellow label include Air. A baroque journey; Vivaldi Concertos, Arias, and Sonatas; Mendelssohn's Violin Concerto and Octet for Strings; and Terezín/Theresienstadt. Hope previously recorded for Warner Classics and Nimbus, playing Bach, Berg, Britten, Elgar, Finzi, Foulds, Ireland, Mendelssohn, Mozart, Penderecki, Schnittke, Shostakovich, Tippett, Walton, and Weill. His interpretation of Ravi Shankar's compositions on the CD East Meets West was hailed worldwide and earned a Grammy nomination.

Beyond the concert stage, Hope has penned three books published in Germany: Familienstücke (Family Pieces); his bestselling memoir, Wann darf ich klatschen? (When Do I Applaud?); and Toi, Toi, Toi! He has written scripts for collaborative performance pieces with the Oscar-winning actor Klaus Maria Brandauer, such as "War and Pieces," "Mozart Unplugged!" and "Dietrich Bonhoeffer – Someone Had to Do Something." He also wrote "An Audience with Beethoven" for Mia Farrow, and "Forbidden Music," which presents poetry and music written by prisoners at the Theresienstadt concentration camp. Many of these projects received their premieres at the Savannah Music Festival, which presents over 100 concerts of all music genres in 17 days every March, and where Hope has held the position of Associate Artistic Director since 2004.

It was probably inevitable that Hope should make the violin his life. He started studying the instrument at age four, and his journey to those first lessons is a story in itself. He was born in Durban, South Africa, in 1973. When he was six months old, his father, the distinguished novelist and anti-apartheid activist Christopher Hope, was finally granted an exit visa on condition he never return. The family went to Paris, then to London, where Hope's mother Eleanor was by chance engaged by the celebrated violinist and conductor Yehudi Menuhin as his secretary, later becoming his long-time manager.

As a child, Hope used to play with Menuhin's grandchildren and, in 1978, took up violin lessons with a neighbor, Sheila Nelson, a renowned teacher who had a special gift for teaching children. Six years later, Hope entered London's Royal College of Music, where he was tutored by Russian masters Itzhak Rashkovsky, Felix Andrievsky, and Grigory Zhislin. He finished his studies at the Royal Academy of Music, where he worked with Zakhar Bron.

When Hope was only eleven, he was invited by Yehudi Menuhin to play Bartók duos with him on German television. This launched a long artistic partnership consisting of over 60 concerts together, including Menuhin's final appearance on March 7, 1999, in which he conducted Hope's performance of Alfred Schnittke's Violin Concerto.

Devoted to contemporary music, Hope has commissioned over thirty works, enjoying close contact with composers such as Alfred Schnittke, Toru Takemitsu, Harrison Birtwistle, Sofia Gubaidulina, György Kurtág, Peter Maxwell-Davies, Krzysztof Penderecki, and Mark-Anthony Turnage. His 2013 Deutsche Grammophon album, Spheres, featured the world premiere recording of four works written for Hope. Hope also gave the world premiere performance and recording of the critically revised Violin Concerto by Alban Berg. A Sunday Telegraph reviewer wrote of the CD: "I do not think I have ever heard a finer account of the Berg than Daniel Hope gives here, not only played to technical perfection but with its poignant emotional content realized to the full."

Hope regularly directs chamber orchestras from the violin, performing with the Chamber Orchestra of Europe, Camerata Salzburg, Lucerne Festival Strings, L'Arte del Mondo, and others. He has appeared at the world's most important festivals, such as the BBC Proms, Lucerne, Hollywood Bowl, Aspen, Ravinia, Salzburg, Edinburgh, Schleswig-Holstein, and Tanglewood. Hope has performed in all of the world's most prestigious venues – from Carnegie Hall to the Concertgebouw – and with the world's greatest orchestras. Highlights include appearances with the Boston and Chicago Symphonies and the Los Angeles Philharmonic, as well as the major orchestras of Berlin, London, Leipzig, Dresden, Israel, Moscow, Oslo, Paris, Stockholm, and Vienna.

Hope plays the 1742 "ex-Lipiński" Guarneri del Gesù, placed generously at his disposal by an anonymous family from Germany. The instrument carries the name of its owner, the 19th-century Polish violinist Karol Lipiński, who shared the stage with Paganini, Schumann, and Liszt. Hope resides in Vienna, Austria. 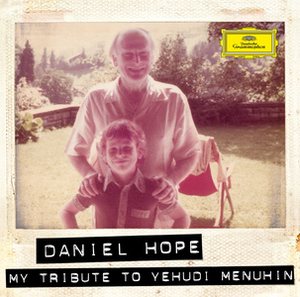 2016 marks the centennial of Yehudi Menuhin, the violin legend whose playing Einstein once cited as a reason to believe in God. To honor this anniversary, on February 5, six-time ECHO Klassik Award-winning violinist Daniel Hope releases his tenth Deutsche Grammophon recording, titled My Tribute to Yehudi Menuhin. Having grown up within the Menuhin household, Hope went on to partner him in more than 60 concert performances, sharing a close association with the older violinist that was truly unique. His new album celebrates the rich diversity of his friend and mentor's musical tastes, combining works by Vivaldi, Mendelssohn, Elgar, Ravel, Bartók, Tavener, Enescu, Jo Knümann, Steve Reich, Hans Werner Henze, and Bechara El-Khoury.