"Lozakovich is a serious artist and demands to be taken seriously; he already plays like one of the greats or, better said, like one of the great players of the past. His tone … resonates with the Romantic warmth of such forebears as Christian Ferras or Jascha Heifetz." - Hamburger Abendblatt, August 2019

Violinist Daniel Lozakovich's majestic music-making has left critics and audiences spellbound. "Perfect mastery. An exceptional talent," observed Le Figaro after a performance in Verbier Festival, while the Boston Globe praised the "poise, tonal purity, and technique to spare" of his debut with the Boston Symphony Orchestra and Andris Nelsons at the Tanglewood Festival in July 2017.

Daniel was born in Stockholm in 2001 and began playing the violin when he was almost seven. He made his solo debut two years later with the Moscow Virtuosi Chamber Orchestra and Vladimir Spivakov in Moscow. Since the first performance Daniel has a major influence by Vladimir Spivakov and playes Daniel collaborates with some of the world's eminent conductors, including Ádám Fischer, Semyon Bychkov, Neeme Järvi,  Esa Pekka Salonen, Andris Nelsons, Robin Ticciati, Marc Albrecht, Klaus Mäkelä, Vasily Petrenko, Tugan Sokhiev, Giancarlo Guerrero, Nathalie Stutzman, Leonard Slatkin and Lorenzo Viotti.

Daniel has a close collaboration with Valery Gergiev, with whom he maintains a strong artistic partnership since their first collaboration during the New Year's concert 2015 at the Tchaikovsky Concert Hall in Moscow. Returning to the Mariinsky Theatre Orchestra to perform the Beethoven Violin Concerto in the closing concert of the XV Moscow Easter Festival and later at the Stars of the White Nights Festival in St. Petersburg, at the Festival de Saint-Denis, also the Baltic Sea Festival in Stockholm's Berwaldhallen, the Rotterdam Gergiev Festival and at the Septembre Musical Montreux Festival with Prokofiev concerto No 2. Daniel opened the Münchner Philharmoniker festival, MPHIL 360°, alongside Valery Gergiev and the Münchner Philharmoniker with Mozart's Concerto No. 5 and has since been reinvited with a series of performances in the 2019/20 season, in Munich and in Amsterdam, with the Beethoven Concerto.

"THE HIGHLIGHT OF THE CONCERT AT THE MARIINSKY THEATRE IN JUNE WAS BEETHOVEN'S VIOLIN CONCERTO PERFORMED BY THE CHERUBIC 15-YEAR-OLD PRODIGY DANIEL LOZAKOVITJ. "YOU HAVEN'T HEARD OF HIM, BUT YOU WILL," GERGIEV SAID." - John Thornhill, FinancialTimes, October 2016

He signed an exclusive contract with Deutsche Grammophon in June 2016, soon after his 15th birthday. The deal made him the youngest member of DG's family of artists. It also reinforced his status as a one-in-a-million virtuoso blessed with an entrancing range of expression and musicianship. Lozakovich's first recording for Deutsche Grammophon, with the Kammerorchester des Symphonieorchesters des Bayerischen Rundfunks, was released in June 2018 and featured Bach's two concerti for violin and orchestra (BWV 1041 and 1042), and the Partita No. 2 in D minor (BWV 1004) for solo violin. The outstanding success of this debut album was marked in the music charts, the album reaching number 1 on the French Amazon overall charts and number 1 in the classical album charts in Germany

"None but the Lonely Heart", Lozakovich's second album for the Yellow Label, was released in October 2019. Dedicated to the music of Tchaikovsky, it includes the Violin Concerto, recorded live with the National Philharmonic Orchestra of Russia and Vladimir Spivakov, the Méditation for violin and orchestra and arrangements of two vocal works, Lensky's Aria from Eugene Onegin and the song from which the album takes its name: the Romance, Op.6 No.6, "None but the lonely heart".

Recent highlights include New York debut at the Mostly Mozart Festival with Louis Langrée, as well as tours to Japan and Asia with Valery Gergiev and a Japan tour with the hr-Sinfonieorchester Frankfurt under the baton of Andrés Orozco-Estrada.

A remarkable 2019/20 season sees Lozakovich return to the Boston Symphony Orchestra in their subscription series with Andris Nelsons, the Orchestre National de France with Neeme Järvi, debuting with the Cleveland Orchestra with Klaus Mäkelä, St. Petersburg Philharmonic Orchestra with Yuri Temirkanov, the Royal Philharmonic Orchestra London with Vasily Petrenko, a tour with the Orchestre de Paris with Christoph Eschenbach and an invitation by Esa-Pekka Salonen to the subscription series of the Los Angeles Philharmonic.

Awarded many prizes including 1st prize at the 2016 Vladimir Spivakov International Violin Competition and "The Young Artist of the Year 2017" award at the Festival of the Nations, "Premio Batuta" in Mexico, and the "Excelentia Award" under the honorary presidency of Queen Sofia of Spain.

Lozakovich studies at the Karlsruhe University of Music with Professor Josef Rissin since 2012, and from 2015 has been mentored by Eduard Wulfson in Geneva. Daniel had also studied with Mikhail Kazinik, Natalja Beshulya and Gerhard Schulz.

Daniel Lozakovich plays the "ex-Baron Rothschild" Stradivari on generous loan on behalf of the owner by Reuning & Son, Boston, and Eduard Wulfson, and plays the Stradivarius "Le Reynier" (1727), generously loaned by LVMH. 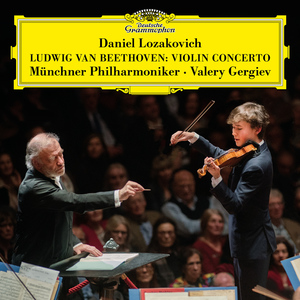 "Immensely gifted emerging artist" (The New York Times) Daniel Lozakovich has been dreaming about recording the Beethoven Violin Concerto since he was eight. He first performed it on stage when he was 13, and at 15 was invited by Valery Gergiev to perform the concerto with him in Moscow. A few short years later, he has reunited with his mentor Gergiev to record the Beethoven with the Munich Philharmonic for Deutsche Grammophon

Tchaikovsky - None but the Lonely Heart

Bach Concertos No. 1/2 & Partita No.2
https://www.deutschegrammophon.com/us/artist/lozakovich/