"Few artists have burst onto the classical music scene in recent years with the incandescence of the pianist Daniil Trifonov." – The New York Times

"The 24-year- old Russian is without question the most astounding young pianist of our age." – The London Times

"We can't actually know what Liszt sounded like, but we do know he was a virtuoso, and he mesmerized his listeners, and people found something distinctive and other-worldly and spiritual about him. All those things hold true of Trifonov, as well, though they add up to a pretty pale description of playing that can only be described as a visceral experience. … His recital Saturday afternoon at the Kennedy Center's Terrace Theater, courtesy of the Washington Performing Arts Society, was a knockout." – Washington Post

"A slender man with an exuberant stage presence, Mr. Trifonov is certainly a virtuoso with a demonstrably prizewinning technique, evident as he fluidly sailed through bravura passages, his fingers moving in a blur through rapid octaves and chords. But he offered far more than mere virtuosity. …Mr. Trifonov demonstrated an elegant touch and witty grace in more lighthearted moments and poetic insight in more introspective passages." – New York Times

"Trifonov's recital was breathtaking. [Martha] Argerich last year told the FT she had never before heard a touch like his, and all I can do is concur: it's not just a matter of precision and weighting, it's a unique amalgam of fastidious tenderness and seemingly unfettered wildness. After two exquisite Debussy Images, he gave an account of Chopin's complete Etudes that was truly revelatory: his emotional restraint – and frugality with the pedal – made the lyrical ones all the more moving, while his preternatural dexterity lent the finger-twisters a rare grace." – Financial Times

"Daniil is a thoroughly subjective artist. His technique is so impeccable that with him, the rest is expression of identity in its purest form. That identity emerges in all the things he's not able to put into words: tenderness, depth, but sometimes also dark abysses."– Deutsche Welle

Russian pianist Daniil Trifonov (dan-EEL TREE-fon-ov) has made a spectacular ascent in the world of classical music as a solo artist, a champion of the concerto repertoire, a collaborator at the keyboard in chamber music and song, and a composer. Combining consummate technique with rare sensitivity and depth, his performances are a perpetual source of awe. "He has everything and more … tenderness and also the demonic element. I never heard anything like that," marveled pianist Martha Argerich, while the Times (UK) has named Trifonov "without question the most astounding pianist of our age."

Focusing on Chopin in the 2017-18 season, he releases Chopin Evocations, his fourth album as an exclusive Deutsche Grammophon artist, which includes both works by Chopin himself and, marking Trifonov's first foray into a new repertoire, works of 20th-century composers who were greatly influenced by the Polish master, including Samuel Barber, Federico Mompou and others.

Trifonov gives over 20 recitals on the same theme across the U.S., Europe and Asia this season, including one in Carnegie Hall as part of a seven-concert, season-long Perspectives series which he curates. Three of the seven concerts are devoted to Chopin and his influence: the solo recital and two all-Chopin programs with cellist Gautier Capuçon and the Kremerata Baltica chamber orchestra. Further concerts in the series include collaborations with baritone Matthias Goerne and Trifonov's teacher and mentor Sergei Babayan, the latter capping a U.S. tour that includes the world premiere of a Carnegie-commissioned work for two pianos by Mauro Lanza; a performance of his own piano concerto with longtime collaborator Valery Gergiev leading the Mariinsky Orchestra, again culminating a U.S. tour; and finally a solo recital in Zankel Hall that includes a seminal piece from each decade of the 20th century. Trifonov curates a similar series of recitals and orchestral appearances this season at the Vienna Konzerthaus, where he gives five performances, and in San Francisco, concluding with a season-closing Rachmaninoff performance with the San Francisco Symphony and Michael Tilson-Thomas.

Trifonov's season contains much else as well. He tours Asia in the fall with a combination of recitals and orchestral performances, and goes on European tours with violinist Gidon Kremer and Kremerata Baltica, the London Philharmonic, the Royal Concertgebouw Orchestra, and the Teatro alla Scala Orchestra. Other orchestral appearances include Strauss's Burleske with the Spanish National Orchestra and Bavarian Radio Symphony Orchestra; the Schumann Concerto with Lisbon's Gulbenkian Orchestra and the Berlin Philharmonic; Prokofiev with the Mariinsky Orchestra led by Gergiev, and the Cleveland Orchestra led by Michael Tilson Thomas; Scriabin's Piano Concerto with the Seattle Symphony and Ludovic Morlot; a performance of his own piano concerto with the Detroit Symphony; and further Rachmaninoff performances with Gergiev and the Munich Philharmonic, the Toronto Symphony led by Peter Oundjian, and the Philadelphia Orchestra under the baton of Yannick Nézet-Séguin.

The 2016-17 season brought the release of Transcendental, a double album that represented Trifonov's third title as an exclusive Deutsche Grammophon artist and the first time Liszt's complete concert etudes had been recorded for the label in full. In concert, the pianist – winner of Gramophone's 2016 Artist of the Year award – played Tchaikovsky's First Piano Concerto under Riccardo Muti in the historic gala finale of the Chicago Symphony's 125th anniversary celebrations. Having scored his second Grammy Award nomination with Rachmaninoff Variations, he performed Rachmaninoff for his debut with the Berlin Philharmonic under Sir Simon Rattle at the orchestra's famous New Year's Eve concert, aired live in cinemas throughout Europe. Also with Rachmaninoff, he made debuts with the Melbourne and Sydney Symphonies, returned to the Los Angeles Philharmonic under Gustavo Dudamel and the Royal Liverpool Philharmonic, and headlined the Munich Philharmonic's "Rachmaninoff Cycle" tour with Gergiev. Mozart was the vehicle for his reengagements with the New York Philharmonic, Cleveland Orchestra, and Philadelphia Orchestra, as well as for dates with the Staatskapelle Dresden at home and at the Salzburg Festival and London's BBC Proms. He rejoined the Staatskapelle for Ravel, besides playing Beethoven with Zurich's Tonhalle Orchestra; Prokofiev with the Rotterdam Philharmonic; Chopin on tour with the Mahler Chamber Orchestra; and Schumann with the Houston Symphony, Royal Stockholm Philharmonic, and on tour with Riccardo Chailly and the Teatro alla Scala Orchestra. With a new recital program of Schumann, Shostakovich, and Stravinsky, Trifonov made recital debuts at London's Barbican and Melbourne's Recital Centre; appeared in Berlin, Vienna, Florence, Madrid, Oslo, Moscow, and other European hotspots; and returned to Philadelphia, Baltimore, and – for the fourth consecutive year – the mainstage of New York's Carnegie Hall. He also returned to the Tanglewood, Verbier, Baden-Baden, and Salzburg Festivals.

The 2013-14 season saw the release of Trifonov: The Carnegie Recital, the pianist's first recording as an exclusive Deutsche Grammophon artist; captured live at his sold-out 2013 Carnegie Hall recital debut, the album scored both an ECHO Klassik Award and a Grammy nomination. Besides the similarly Grammy-nominated Rachmaninoff Variations, recorded with the Philadelphia Orchestra and Yannick Nézet-Séguin, his discography also features a Chopin album for Decca and a recording of Tchaikovsky's First Piano Concerto with Gergiev and the Mariinsky Orchestra on the ensemble's own label.

It was during the 2010-11 season that Trifonov won medals at three of the music world's most prestigious competitions, taking Third Prize in Warsaw's Chopin Competition, First Prize in Tel Aviv's Rubinstein Competition, and both First Prize and Grand Prix – an additional honor bestowed on the best overall competitor in any category – in Moscow's Tchaikovsky Competition. In 2013 he was also awarded the prestigious Franco Abbiati Prize for Best Instrumental Soloist by Italy's foremost music critics.

Born in Nizhny Novgorod in 1991, Trifonov began his musical training at the age of five, and went on to attend Moscow's Gnessin School of Music as a student of Tatiana Zelikman, before pursuing his piano studies with Sergei Babayan at the Cleveland Institute of Music. He has also studied composition, and continues to write for piano, chamber ensemble, and orchestra. When he premiered his own piano concerto in 2013, the Cleveland Plain Dealer marveled: "Even having seen it, one cannot quite believe it. Such is the artistry of pianist-composer Daniil Trifonov." 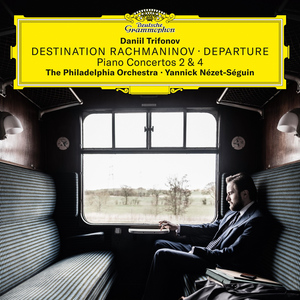 As a teenager, Daniil Trifonov absorbed lessons from the recordings of Sergei Rachmaninov, lessons that fed the creative process of his latest Deutsche Grammophon project, Destination Rachmaninov – Departure, the first of two albums comprising Trifonov's cycle of the great Russian composer's piano concertos. Destination Rachmaninov – Departure, set for release on October 12, 2018, features Concertos Nos. 2 and 4, along with Rachmaninov's solo piano transcriptions of three movements from Bach's Violin Partita in E major. Together with its upcoming October 2019 sequel Destination Rachmaninov – Arrival, which contains Concertos Nos. 1 and 3, Trifonov's new album documents a journey of artistic exploration made in company with the Philadelphia Orchestra and its music director Yannick Nézet-Séguin, who have a special, historical connection to Rachmaninov. Rachmaninov first performed with the Philadelphia Orchestra and its then Music Director Leopold Stokowski in 1913 as a soloist in his own Third Piano Concerto and returned many times as pianist and conductor before his death thirty years later.