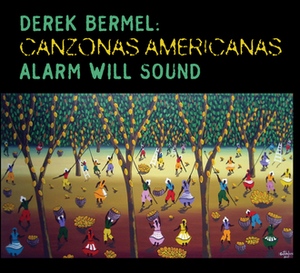 "…his music is fresh, creative, and uniquely his own." – American Record Guide

"Derek Bermel synthesizes the diverse musical languages of his time into a unique, thoroughly individual American voice that is tuneful and rich, engaging and sophisticated," says Alan Pierson, Artistic Director/Conductor of Alarm Will Sound and the Brooklyn Philharmonic.  "Canzonas Americanas establishes Derek as a composer firmly in an American tradition like Copland, Ives, Gershwin, and Ellington before him."

The versatile Bermel has been widely hailed for his creativity and theatricality.  He re-imagines the sounds of indigenous world music, jazz, and rock in his uniquely virtuosic and dynamic compositions. Canzonas Americanas takes listeners on a rhythmic and sonic journey – from the yearning, pulsating chôros at a club in Rio di Janeiro to the intricate, colorful xylophone music of a West African village. "Music is a prism through which I see and reflect the world," says Bermel.

The title track Canzonas Americanas (2010) was commissioned and premiered by the Los Angeles Philharmonic led by Gustavo Dudamel.  Through a wide array of American popular music idioms and Latin rhythms, Canzonas Americanas evokes the spirit of Gershwin, Ellington, Villa-Lobos, Bernstein, and other trailblazing composers who have been indelibly influenced by both North and South American musical traditions.  Based on Lobi xylophone music of Ghana, Hot Zone (1995) draws from Bermel's study of the West African gyil in 1992 with Ngmen Baaru.  Bermel is scheduled to return to Ghana next year.  Hot Zone has been described as elegantly contrasting "the heavily syncopated tutti rhythms with the melismatic solo writing for English horn and cello" (New Music Box).

Bermel's fanciful energy is on full display in Continental Divide (1996), written during a period when Bermel was traveling back and forth between New York and Amsterdam (where he studied with Louis Andriessen).  The piece is inspired by both the Continental Divide, the dividing line in the U.S. where water flows to different oceans, and by the chapter The Origin and Fate of the Universe in Stephen Hawking's Brief History of Time.  The quick leaps and complex relations (known as metric modulations) from one tempo to the next mirror Hawking's and Alan Guth's "bursts of expansion" in the early universe.  According to Pierson, Continental Divide remains one of the most challenging pieces in Alarm Will Sound's repertoire.

From frenetic to funky to flowing, the three rhythmic currents of Three Rivers (2001) are manipulated by Bermel to create a work whose character is ever-changing. It toys with radically contrasting musical elements - controlled v. uncontrolled, fused v. pulled apart, mixed v. collided, earthy v. angular – and calls for abrupt shifts of temperament from the ensemble.  Alarm Will Sound has made Three Rivers a specialty.  Following one AWS performance,  the Chicago Tribune write, "this is one sonic knockout I'd love to hear again."

Bermel's skill in characterization comes to fore in the two vocal settings on this disc.  Natural Selection (2000), a four-song cycle for baritone and ensemble, is an edgy and amusing series based on animal portraits written by poets Wendy S. Walters and Naomi Shihab Nye.  The songs' titles – One Fly, Spider Love, Bag of Brown Shoes, and Dog – disguise the true humanistic stories they tell.  At the End of the World (2000) for soprano and large ensemble was commissioned and premiered by the Albany Symphony's avant-garde unit The Dogs of Desire to celebrate the 350th anniversary of the founding of Albany, New York. It's a compelling setting of an early existentialist poem by Nicole Krauss.

About Derek Bermel: Described by the Toronto Star as an "eclectic with wide open ears", Grammy-nominated composer and clarinetist Derek Bermel (b.1967) has worked with a diverse array of musicians including Wynton Marsalis, Midori, John Adams, Leonard Slatkin, Paquito D'Rivera, Philip Glass, James Galway, Gustavo Dudamel, Luciana Souza, Yasiin Bey (Mos Def), and Stephen Sondheim. In recent seasons Bermel performed as clarinet soloist alongside Marsalis in his own Migration Series, a work commissioned by the Lincoln Center Jazz Orchestra and ACO. He also appeared as soloist with the Los Angeles Philharmonic in Adams' Gnarly Buttons, and in his own concerto Voices at the Beijing Modern Music Festival. The Philharmonia Orchestra in London also produced an all-Bermel concert as part of its Music of Today series at Queen Elizabeth Hall. Other highlights of recent seasons include Mar de Setembro with the Los Angeles Chamber Orchestra, the Pittsburgh Symphony's premiere of The Good Life for chorus, soloists, and orchestra, Golden Motors, a music-theatre collaboration with librettist/lyricist Wendy S. Walters, and return engagements at Carnegie Hall for the premiere of A shout, a whisper, and a trace, a Koussevitzky Commission for ProMusica and ACO (conducted by Dennis Russell Davies), and as soloist in both the Copland Concerto and the world premiere of Fang Man's clarinet concerto (conducted by George Manahan).

Currently serving as Artist-in-Residence at the Institute for Advanced Study and Creative Adviser to the American Composers Orchestra at Carnegie Hall, Bermel has received commissions from the Pittsburgh, National, Boston, Saint Louis, New Jersey, Albany, and Pacific Symphonies, Los Angeles and Westchester Philharmonics, the New York Youth Symphony, Chamber Music Society of Lincoln Center, WNYC Radio, eighth blackbird, the Guarneri and JACK string quartets, Music from China, De Ereprijs (Netherlands), Jazz Xchange (U.K.), Figura (Denmark), violinist Midori, electric guitarist Wiek Hijmans, cellist Fred Sherry, and pianists Christopher Taylor and Andy Russo, among others. His many awards include the Alpert Award in the Arts, the Rome Prize, Guggenheim and Fulbright Fellowships, and the Trailblazer Award from the American Music Center, as well as the Academy Award from the American Academy of Arts and Letters, the University of Michigan, commissions from the Koussevitzky and Fromm Foundations, and residencies at Yaddo, Tanglewood, Aspen, Banff, Bellagio, Copland House, Sacatar, and Civitella Ranieri.

Bermel holds B.A. and D.M.A. degrees from Yale University and the University of Michigan. He studied composition with William Albright, Louis Andriessen, William Bolcom, Henri Dutilleux, André Hajdu, and Michael Tenzer, and clarinet with Ben Armato and Keith Wilson. He also studied ethnomusicology and orchestration in Jerusalem with André Hajdu, later traveling to Bulgaria to study Thracian folk style with Nikola Iliev, to Brazil to learn caxixi with Julio Góes, and to Ghana to study Lobi xylophone with Ngmen Baaru. His music is published by Peermusic (North/South America & Asia) and Faber Music (Europe & Australia).  For everything else, visit http://www.derekbermel.com.