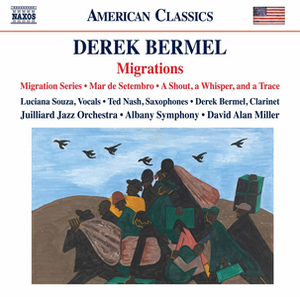 Bermel's engagement with other musical cultures has become part of the fabric and force of his compositional language; he grew up playing jazz, funk, and rock; studied with a wide-range of compositional luminaries, including William Bolcom, Henri Dutilleux, and Louis Andriessen; and traveled extensively to absorb musical traditions from across the globe, including Thracian folk music, Brazilian caxixi percussion music, and Lobi xylophone from Ghana. Of the new album, Bermel writes: "Like many Americans, my family came to the US from distant lands. Migrations is inspired by three artistic journeys-painter Jacob Lawrence's vivid depiction of African American migration from South to North; Portuguese poet Eugénio de Andrade's journeys across the ocean and the soul; and Hungarian composer Béla Bartók's emigration to my hometown of New York City-and by my collaborators Wynton Marsalis and Luciana Souza."

Migration Series was commissioned by Wynton Marsalis, for the Jazz at Lincoln Center Orchestra and by the American Composers Orchestra. It takes its title from a 60-painting series by Jacob Lawrence, which traces the movement of blacks from South to the urban North during the First and Second World Wars (known as "The Great Migration"). Music critic George Grella writes in his program notes: "Bermel describes his musical thinking here as realized in the form of a mosaic; he uses various motifs that reappear in each movement, like the repeated use of tiles to create different combinations of patterns with the same source material. This is a visual quality that Bermel identifies in Lawrence's work, but that's secondary to the physical pleasure of the music." Bermel here draws freely on his training and expertise as a clarinetist: "That feel of music coming through the hands," Grella observes, "is plain and strong in the swing and swagger of Migration Series." View Panels from Lawrence's Migration Series. (Cover Art: The Migration Series, Panel 3, "From every southern town migrants left by the hundreds to travel north" (1940-41); The Phillips Collection. Washington, D.C. Acquired 1942.)

Written when Bermel was composer-in-residence at the Los Angeles Chamber Orchestra, Mar de Setembro-- consists of five songs ("Prologue: Que voz lunar," "Mar de Setembro," "Canção," "Ocultas águas," and "Frutas").  Mar de Setembro was composed in collaboration with the Brazilian jazz singer Luciana Souza. Bermel commented that great Portuguese poet Eugénio de Andrade's work "evokes saudade"-a hard-to-translate Portuguese word with a loose meaning of longing and sadness for lost people and lost things." The world-premiere was met with critical acclaim, the Los Angeles Times said "Bermel . . . has produced a small gem." Mar de Setembro, Grella writes, "is clear and upfront about its non-classical qualities, including the rhythms, harmonies, and the graceful, bossa nova–tinged vocal melodies." Something of a cultural travelogue, it opens the door to further possibilities: "The one place I've always wanted to go and have not yet been is Cuba," Bermel muses, and the country is "still on my list."

A commission from the Koussevitzky Music Foundation, A Shout, a Whisper, and a Trace pays tribute to Béla Bartók, who spent the last five years of his life in New York. The work  was inspired by Bartók's experiences as a New Yorker to view his own home city from a different perspective. Bartók had a difficult time adjusting to New York, and temporarily stopped composing; he died there, of leukemia, in 1945. "Bermel," writes Grella, "loves Bartók, whose music was deeply informed by his study of folk music. In the final, haunting movement, Bartók's ghost floats along the streets of Bermel's native New York, mingling with the other residents past and present. As only music can, the piece collapses the distance of time into the immediate present of the listening experience."

Grammy-nominated composer and clarinetist Derek Bermel is artistic director of the American Composers Orchestra, director of Copland House's CULTIVATE emerging composers institute, and curator of the Gamper Festival of Contemporary Music at the Bowdoin Music Festival. He has performed as a clarinetist worldwide, collaborated with an eclectic array of artists, and received commissions globally from the Pittsburgh, National, and St. Louis Symphony Orchestras, the Pacific Symphony, the Los Angeles Philharmonic, the Saint Paul Chamber Orchestra, the Chamber Music Society of Lincoln Center, New York's WNYC, the Tanglewood Festival, Eighth Blackbird, the Asko/Schönberg Ensemble, Veenfabriek (the Netherlands), the Guarneri and JACK string quartets, violinist Midori, and the Koussevitzky and Fromm Music Foundations. His many honors include the Alpert Award in the Arts, the Rome Prize, Guggenheim and Fulbright fellowships, the American Music Center's Trailblazer Award, the Academy Award of the American Academy of Arts and Letters, and residencies at Yaddo, Tanglewood, Aspen, Banff, Bellagio, and Copland House. He recently served as composer-in-residence with the Seattle Symphony and as artist-in-residence at Princeton's Institute for Advanced Study.

In 1941, a 23-year-old Harlem artist named Jacob Lawrence produced the Migration Series, 60 paintings depicting the Great Migration, the epic movement of African-Americans from the rural South to the urban North during the early decades of the 20th century. The series was an immediate success. Shortly thereafter, this collection was acquired by two museums, New York's Museum of Modern Art and the Phillips Collection in Washington, DC, which divided the panels according to their even and odd numbers.

In recent times, Lawrence's masterwork has enjoyed newfound resonance, inspiring a multimedia dance production, a book of scholarly essays, and an adaptation based on the Arab Spring.

It has also yielded Migration Series, composer Derek Bermel's sweeping, five-movement concerto for jazz ensemble and orchestra. Commissioned by Wynton Marsalis, the concerto is the centerpiece of "Migrations," a Naxos recording of Bermel's music by the Albany Symphony Orchestra and the Juilliard Jazz Orchestra, conducted by David Alan Miller.

In a display of Bermel's deep eclecticism, the album also features two other works rooted in non-Western classical forms - Mar de Setembro (2011), written for the Brazilian singer Luciana Souza, and A Shout, a Whisper, and a Trace (2009), about Bela Bartók's years in New York.

"I was really first intrigued and then impressed when I heard Migration Series," says David Alan Miller, Albany Symphony's Music Director. "It charted daring territory because few have done it successfully - this combination of jazz band and orchestra."

Miller adds, "The idea behind the piece is so strong. It's so clearly and beautifully inspired by the images. That helped it not seem like a pastiche project."

Derek Bermel describes its form as a mosaic. "I realized there are different elements that ping-pong back and forth between the different paintings," he said. "That gives you a larger composite view of a big story that he tells through lots of smaller stories, and I just found that fascinating. He does it with color, he does it with shape, he does it with texture."

Derek Bermel was a young boy living on Manhattan's Upper West Side when his mother took him to a 1974 retrospective of Lawrence's work at the Whitney Museum of American Art. The Migration Series, with its cubist-inflected shapes and muted colors, stuck in his consciousness. Thirty years later, when Wynton Marsalis requested a piece that would combine the Jazz at Lincoln Center Orchestra and the American Composers Orchestra (ACO), Bermel returned to the series. He deploys a rumbling groove interwoven with gospel ballads, moaning blues, and sinuous solos for brass, saxophone solo (played by Ted Nash) and clarinet (Bermel himself).

Unlike composers who dabble in jazz, Bermel spent his childhood imitating Thelonious Monk records on the piano. "That was my way into playing piano," he explains. "Monk was more of an influence than probably any composer on my harmonic language." Another model was Duke Ellington, "because he was a composer who couldn't be contained."

These influences coalesced during his graduate studies at the University of Michigan, where his teachers were the polymaths William Bolcom and William Albright. Bermel has also traveled to Ghana to learn the Lobi xylophone, Bulgaria to study Thracian folk music, and Ireland to learn the Uilleann pipes.

In approaching the Migration Series, Bermel was also drawn to its larger, social themes. "I'm from a family of European Jews," he notes, "so when you think of these large movements of people who are driven by  an imperative to start anew, in a different place, it's a very powerful work in that way as well."

Migration is also a central theme of A Shout, a Whisper, and a Trace, a three-movement orchestral work that honors Bela Bartók's move from his native Hungary to New York City after the outbreak of World War II. The piece was an opportunity for Bermel to consider his hometown with fresh eyes.

"I had just picked up a copy of Bartók's letters in a used bookstore," said Bermel. "I was fascinated, especially by the section with the letters he wrote home from New York. Bartók's letters were full of this longing, much in the way that Lawrence describes the South."

Bartók found life in New York rather difficult. He and his wife lived on money from his research fellowship at Columbia University, in which he transcribed Serbo-Croatian folksongs for cataloging and publication. He struggled with traffic and the subway system. Though he produced a handful of major works - including the Concerto for Orchestra - he gave few piano performances and the effects of leukemia began to take their toll (he died of complications of the disease in 1945).

Accordingly, the first movement of Bermel's score explores a clash of cultures.

After a second movement inspired by Bartók's "night music" sounds, the finale imagines him as a ghost-like figure, haunting the city streets. "I thought of his ghost and then I thought of all the ghosts of people who lived here before. So that was kind of my way into a New York piece."

One can't accuse Bermel of under-researching his subject matter. He has made several trips to Brazil, where he studied caxixi percussion and even learned Portuguese (his wife also hails from Portugal). Lightly touching on bossa nova rhythms, the piece evokes Portuguese saudade, a feeling of intense melancholy.

"Luciana, being from Brazil, is fluent in those styles," Bermel said. "She is an inspiration in the way that it was an inspiration to write for Wynton and his band. Like Ellington, she knows about classical music, she's a jazz singer, and she sings Brazilian music, so her world is very big."

Then again, given the wide-ranging influences that Derek Bermel draws from, it's clear that his musical world is pretty big too.