Born in Lvov, Poland, Emanuel Ax moved to Winnipeg, Canada, with his family when he was a young boy. His studies at the Juilliard School were supported by the sponsorship of the Epstein Scholarship Program of the Boys Clubs of America, and he subsequently won the Young Concert Artists Award. Additionally, he attended Columbia University, where he majored in French. Mr. Ax captured public attention in 1974 when he won the first Arthur Rubinstein International Piano Competition in Tel Aviv. In 1975 he won the Michaels Award of Young Concert Artists followed four years later by the coveted
Avery Fisher Prize.

His collaboration with Mark Morris Dance Group continues during summer 2009 partnered with Yo-Yo Ma in a dance work jointly commissioned by the Tanglewood and Mostly Mozart festivals.

In recognition of the bicentenaries of Chopin and Schumann in 2010 and in partnership with London's Barbican, Amsterdam's Concertgebouw, Carnegie Hall, the Los Angeles Philharmonic and the San Francisco Symphony, Mr. Ax has commissioned new works from composers John Adams, Peter Lieberson and Osvaldo Golijov for three recital programs to be presented in each of those cities with colleagues Yo-Yo Ma and Dawn Upshaw.

In addition to this large-scale project he will tour Asia with the New York Philharmonic on their first tour with incoming Music Director Alan Gilbert and tour in Europe with both the Chamber Orchestra of Europe and James Conlon as well as the Pittsburgh Symphony with Manfred Honeck. As a regular visitor in subscription concerts he will return to Chicago, Philadelphia and Boston during the spring.

In the 2008-09 season, Mr. Ax's special projects included a duo recital tour with Yefim Bronfman with performances at Chicago's Orchestra Hall, Walt Disney Concert Hall, and Carnegie Hall; a performance with Itzhak Perlman and Yo-Yo Ma at Carnegie Hall; and solo recital tours in both North America and Europe. Other European engagements included a tour of the Far East with the Dresden Staatskapelle and Fabio Luisi, with whom he recorded the Strauss Burleske for Sony Clasical; and performances with the Tonhalle Orchestra, Bayerischer Rundfunk Orchestra in Munich and Carnegie Hall, the London Philharmonia, and the Orchestre National de France.

Mr. Ax has been an exclusive Sony Classical recording artist since 1987. Recent releases include Strauss's Enoch Arden narrated by Patrick Stewart; discs of two-piano music by Brahms and Rachmaninoff with Yefim Bronfman; and soon to be released Mendelssohn Trios with Yo-Yo- Ma and Itzhak Perlman. Mr. Ax has received Grammy awards for the second and third volumes of his cycle of Haydn's piano sonatas. He has also made a series of Grammy-winning recordings with cellist Yo-Yo Ma of the Beethoven and Brahms sonatas for cello and piano. His other recordings include the concertos of Liszt and Schoenberg, three solo Brahms albums, an album of tangos by Astor Piazzolla, and the premiere recording of John Adams's Century Rolls with the Cleveland Orchestra for Nonesuch. In the 2004-05 season Mr. Ax also contributed to an International Emmy award-winning BBC documentary commemorating the Holocaust that aired on the 60th anniversary of the liberation of Auschwitz.

Mr. Ax resides in New York City with his wife, pianist Yoko Nozaki. They have two children together, Joseph and Sarah. He is a Fellow of the American Academy of Arts and Sciences and holds honorary doctorates of music from Yale and Columbia Universities.

For his latest album, Songs of Joy & Peace, the multiple Grammy?-winning cellist Yo-Yo Ma invited many of his favorite artists from the worlds of popular and classical music to collaborate on a selection of songs -- some sacred, some secular, some traditionally seasonal, some simply beloved -- connected in their sense of wonder and appreciation of the holiday season. Yo-Yo Ma conceived of Songs of Joy & Peace as a universal holiday house party of music "uniting different forms of joy" with the idea of combining familiar material with songs that would offer the listener the gift of discovery performed by old friends and new. Songs of Joy & Peace celebrates the universal hopes, dreams and good cheer animating seasonal festivals -- Christmas, Hanukkah, Eid, Kwanzaa, Yuletide, Winter Solstice, New Year's, Ramadan -- the world over.

Celebrating his 30th anniversary with Sony Classical and Sony Masterworks, Yo-Yo Ma is an exclusive Sony Classical artist, and his discography of over 75 albums (including 15 Grammy Award winners) reflects his wide-ranging interests. He has made several successful recordings that defy categorization, among them Hush with Bobby McFerrin, Appalachia Waltz and Appalachian Journey with Mark O'Connor and Edgar Meyer and two Grammy-winning tributes to the music of Brazil, Obrigado Brazil and Obrigado Brazil - Live in Concert. Yo-Yo Ma's most recent recordings include Paris: La Belle poque, with pianist Kathryn Stott, Appassionato, which contains some of the world's most romantic music and New Impossibilities, a live album recorded with the Silk Road Ensemble and the Chicago Symphony Orchestra; he also appears on John Williams's soundtrack for Rob Marshall's film Memoirs of a Geisha. Across this full range of releases, Yo-Yo Ma remains one of the best-selling recording artists in the classical field. All of his recent albums have quickly entered the Billboard chart of classical best sellers, remaining in the Top 15 for extended periods, often with as many as four titles simultaneously on the list.

Yo-Yo Ma is strongly committed to educational programs that not only bring young audiences into contact with music but also allow them to participate in its creation. While touring, he takes time whenever possible to conduct master classes as well as more informal programs for students - musicians and non-musicians alike. At the same time he continues to develop new concert programs for family audiences (helping, for instance, to inaugurate the family series at Carnegie Hall). In each of these undertakings, he works to connect music to students' daily surroundings and activities with the goal of making music and creativity a vital part of children's lives from an early age. He has also reached young audiences through appearances on Arthur, Mister Rogers' Neighborhood and Sesame Street.

Yo-Yo Ma was born in 1955 to Chinese parents living in Paris. He began to study the cello with his father at age four and soon came with his family to New York, where he spent most of his formative years. Later, his principal teacher was Leonard Rose at the Juilliard School. He sought out a traditional liberal arts education to expand upon his conservatory training, graduating from Harvard University in 1976. He has received numerous awards, including the Avery Fisher Prize (1978), the Glenn Gould Prize (1999), the National Medal of the Arts (2001), the Dan David Prize (2006), the Sonning Prize (2006), and the World Economic Forum's Crystal Award (2008). Appointed a CultureConnect Ambassador by the United States Department of State in 2002, Yo-Yo Ma has met with, trained and mentored thousands of students worldwide including Lithuania, Korea, Lebanon, Azerbaijan and China. He has performed with and conducted master classes for members of the Iraqi National Symphony Orchestra. In 2006, Secretary General Kofi Annan named him a U.N. Messenger of Peace and in 2007 Secretary General Ban Ki-Moon extended his appointment.

Undeniably the reigning virtuoso of the violin, Itzhak Perlman enjoys superstar status rarely afforded a classical musician. In January 2009, Mr. Perlman was honored to take part in the Inauguration of President Barack Obama, premiering a piece written for the occasion by John Williams and performing with clarinetist Anthony McGill, pianist Gabriela Montero, and cellist Yo-Yo Ma. President Reagan granted him a "Medal of Liberty" in 1986, and President Clinton awarded him the "National Medal of Arts" in December 2000. In December 2003, he was a Kennedy Center Honoree. In May 2007, he performed at the State Dinner for Her Majesty The Queen and His Royal Highness The Duke of Edinburgh, hosted by President George W. Bush and Mrs. Bush at the White House.

As soloist, Mr. Perlman continues to visit major centers throughout the world. In September 2009, he will help celebrate the opening of the Barvikha Concert Hall outside Moscow with a reprise of his acclaimed Klezmer program, "In the Fiddler's House." He will also be featured in recital at the Moscow Conservatory with pianist and frequent collaborator, Rohan De Silva. Other highlights of his 2009-10 season include a performance with the New York Philharmonic to commemorate World Polio Day; two West Coast tours covering Los Angeles, San Diego and Vancouver, among others; and recitals across North and Central America including Mexico City, Atlanta, Miami, and Boston. Mr. Perlman also appears with students from the Perlman Music Program in a three-concert series at the Metropolitan Museum of Art in New York and in Israel.

He proudly possesses four Emmy Awards and fifteen Grammy awards. He performed at the 2006 Academy Awards and at the Juilliard School Centennial gala, broadcast nationally on Live from Lincoln Center. He collaborated with composer John Williams in Steven Spielberg's Academy Award-winning film Schindler's List, in which he performed the violin solos.

Mr. Perlman devotes considerable time to education, both in his participation each summer in the Perlman Music Program and his teaching at the Juilliard School, where he holds the Dorothy Richard Starling Foundation Chair. He was awarded an honorary doctorate and a centennial medal on the occasion of Julliard's 100th commencement ceremony in May 2005. 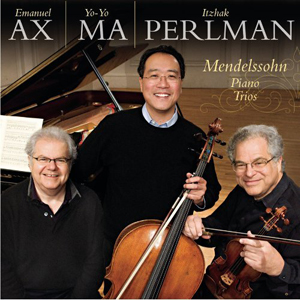 To commemorate the Mendelssohn bicentennial in 2009, cellist Yo-Yo Ma, pianist Emanuel Ax, and violinist Itzhak Perlman have collaborated together for the first time and recorded the Mendelssohn Piano Trios. The three players performed these works at Carnegie Hall in March 2009 and will once again dazzle audiences with their interpretation during their Live from Lincoln Center telecast on PBS on May 5, 2010. The Sony Classical release Mendelssohn: Piano Trios contains complete accounts of Mendelssohn's Piano Trio No. 1 in D Minor, Op. 49 and Piano Trio No. 2 in C Minor, Op. 66. This is the first chamber recording these three virtuosos have recorded together.