A classmate of director Sergio Leone with whom he would form one of the great director/composer partnerships (right up there with Eisenstein & Prokofiev, Hitchcock & Herrmann, Fellini & Rota), Ennio Morricone studied at Rome's Santa Cecilia Conservatory, where he specialised in trumpet. His first film scores were relatively undistinguished, but he was hired by Leone for Per un pugno di dollari (1964) on the strength of some of his song arrangements. His score for that film, with its sparse arrangements, unorthodox instrumentation (bells, electric guitars, harmonicas, the distinctive twang of the jew's harp) and memorable tunes, revolutionised the way music would be used in Westerns, and it is hard to think of a post-Morricone Western score that doesn't in some way reflect his influence. Although his name will always be synonymous with the spaghetti Western, Morricone has also contributed to a huge range of other film genres: comedies, dramas, thrillers, horror films, romances, art movies, exploitation movies -making him one of the film world's most versatile artists. He has written nearly 400 film scores, so a brief summary is impossible, but his most memorable work includes the Leone films, Gillo Pontecorvos _Battaglia di Algeri, La (1965)_ , Roland Joff?'s The Mission (1986), Brian De Palma's The Untouchables (1987) and Giuseppe Tornatore's Nuovo cinema Paradiso (1988), plus a rare example of sung opening credits for Pier Paolo Pasolini's Uccellacci e uccellini (1966). It must be stressed that he is *not* behind the work of the entirely separate composers Bruno Nicolai and Nicola Piovani despite allegations made by more than one supposedly
reputable film guide! 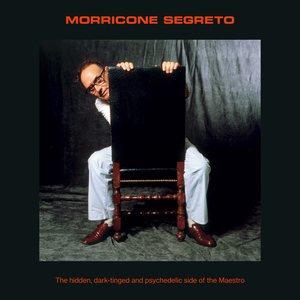 To commemorate what would have been the 92nd birthday of iconic Italian composer Ennio Morricone, his home label Decca joins forces with CAM Sugar to present Morricone Segreto, a brand-new collection featuring seven previously unreleased tracks. The collection, which marks Morricone's first posthumous release, is available digitally and on CD/vinyl on 6th November.

The new release is a treasure trove of rare and forgotten pieces and alternate takes from the historical archives of CAM Sugar. Morricone Segreto explores what is possibly Morricone's richest creative period, between the end of the 1960s to the early 80s, demonstrating his long-lasting influence on generations of musicians and film directors to this day.

Featuring seven original pieces which have never been released before, the collection is an acid-tinged sonic journey through mysterious voices, fuzz guitars, airy strings, eerie synths and modern grooves from the composer who was always ahead of the trend, dictating style in his own way. Listeners can hear a selection of scores where Morricone managed to create his unique and unmistakable style, blending an array of genres including avant-garde with the finest pop-psych sounds. Highlights include extracts from Lui Per Lei, Stark System, La Smagliatura, and Il Clan Dei Siciliani.

We All Love Ennio Morricone
http://www.enniomorricone.com