Among the world's leading violinists, Gidon Kremer has perhaps pursued the most unconventional career. He was born on 27 February 1947 in Riga, Latvia, and began studying at the age of four with his father and grandfather, both distinguished string players. At the age of seven, he enrolled as a student at Riga Music School where he made rapid progress, and at sixteen he was awarded the First Prize of the Latvian Republic. Two years later he began his studies with David Oistrakh at the Moscow Conservatory. Gidon Kremer went on to win a series of prestigious awards, including prizes in the 1967 Queen Elisabeth Competition in Brussels and 1969 Montreal International Music Competition and first prize in both the 1969 Paganini and 1970 Tchaikovsky International Competitions.

It was from this secure platform of study and success that Gidon Kremer launched his distinguished career. Over the past five decades he has established and sustained a worldwide reputation as one of the most original and compelling artists of his generation. He has appeared on almost every major concert stage as recitalist and with the most celebrated orchestras of Europe and North America, and has worked with many of the greatest conductors of the past half century.

Gidon Kremer's repertoire is unusually wide and strikingly varied. It encompasses the full span of classical and romantic masterworks for violin, together with music by such leading twentieth and twenty-first century composers as Berg, Henze and Stockhausen. He has also championed the work of living Russian and Eastern European composers and has performed many important new compositions by them, several of which have been dedicated to him. His name is closely associated with such composers as Alfred Schnittke, Arvo Pärt, Giya Kancheli, Sofia Gubaidulina, Valentin Silvestrov, Luigi Nono, Edison Denisov, Aribert Reimann, Peteris Vasks, John Adams, Victor Kissine, Michael Nyman, Philip Glass, Leonid Desyatnikov and Astor Piazzolla, whose works he performs in ways that respect tradition while being fully alive to their freshness and originality. It is fair to say that no other soloist of comparable international stature has done more to promote the cause of contemporary composers and new music for violin.

An exceptionally prolific recording artist, Gidon Kremer has made over 120 albums. Many of these have received prestigious international awards and prizes in recognition of his exceptional interpretative insights. The artist's list of awards includes, among many others, the Grand prix du Disque, the Deutscher Schallplattenpreis, the Ernst von Siemens Musikpreis, the Bundesverdienstkreuz, the Premio dell' Accademia Musicale Chigiana, the Triumph Prize 2000 (Moscow), the Unesco Prize in 2001, the Saeculum Glashütte Original MusikFestspielPreis from Dresden in 2007, the Rolf Schock Prize for the Musical Arts from Stockholm in 2008, the Lifetime Achievement Award of the Istanbul Music Festival in 2010, and the Una Vita Nella Musica – Artur Rubinstein Prize from Venice in 2011. In 2016 Gidon Kremer has received a Praemium Imperiale prize that is widely considered to be the Nobel Prize of music.

In 1997 Maestro Kremer founded Kremerata Baltica chamber orchestra to foster outstanding young musicians from the three Baltic States – Estonia, Latvia and Lithuania. The ensemble and its founder have toured extensively together over the past two decades, appearing at the world's leading festivals and concert venues. They have also recorded two dozen albums for the Teldec, Nonesuch, Burleske, Deutsche Grammophon and ECM labels. During 2016-17 they will jointly celebrate the ensemble's 20th anniversary and Maestro Kremer's 70th birthday year with extensive tours of the United States, Europe and the Far East. The violinist will also appear as a concerto soloist with, among others, the Philharmonisches Staatsorchester Hamburg and Kent Nagano, the Berliner Philharmoniker and Christian Thielemann, the Boston Symphony Orchestra and Juanjo Mena, and the National Symphony Orchestra and Christoph Eschenbach.

In February 2002 Gidon Kremer and Kremerata Baltica received the Grammy Award in the "Best Small Ensemble Performance" category for After Mozart on Nonesuch; the album was awarded an ECHO Klassik later that year. Their 2014 release on ECM of works by Mieczysław Weinberg was nominated for a Grammy in 2015.

In 2015 Deutsche Grammophon released New Seasons, comprising Gidon Kremer and Kremerata Baltica's recording of Philip Glass's Violin Concerto No 2, The American Four Seasons, and works by Pärt, Kancheli and Shigeru Umebayashi. Their latest album, issued on ECM in October 2015 to mark Giya Kancheli's 80th birthday year, pairs the Georgian composer's Chiaroscuro for violin, string orchestra and percussion and Twilight for two violins and string orchestra, with Maestro Kremer and Patricia Kopatchinskaja as soloists. Both titles attracted high critical praise and a substantial international audience within weeks of their release.

Gidon Kremer plays an instrument made by Nicola Amati in 1641. He is the author of four books, of which the latest is Letters to a Young Pianist (2013). These writings have been translated into many languages and reflect the breadth of his artistic pursuits and aesthetic outlook.

Giedrė Dirvanauskaitė is a Lithuanian cellist. She is a laureate of several national competitions; attended master classes held by M. Rostropovich, D. Geringas, H. Beyerle, T. Grindenko, and others.

In recent years Giedrė Dirvanauskaitė has extensively toured with many different chamber music formations. Since 2009, she regularly performs and tours in a trio with violinist Gidon Kremer and pianist Khatia Buniatishvili. The latter trio's released record "Kissine/Tchaikovsky: Piano trios" (ECM, 2011) won the prestigious German Critics Award as a recording of exceptional artistry, in addition to receiving praise from all over the world as one of the best recordings of P. Tchaikovsky's works ever made. Other recordings with G. Dirvanauskaitė's solo part include "Hymns and Prayers" – Silent Prayer by G. Kancheli (ECM, 2008), "Between the Waves" – Duo by V. Kissine (ECM, 2013) and 2 CD album released by the label ECM – a homage to a composer Mieczyslaw Weinberg – including his 10 Symphony for strings and String trio for which G. Dirvanauskaitė was nominated for the Gammy award 2015.

In January 2015 Giedrė Dirvanauskaitė toured together with Gidon Kremer and pianist Daniil Trifonov as a trio through USA. She remains to be the leader of violoncello group of the Kremerata Baltica chamber orchestra that she is a member since 1997. Dirvanauskaitė plays an instrument by Alexander Gaglianus, made in 1709.

Described by the Financial Times as an artist who is "able to let the music breathe", Yulianna Avdeeva, who gained international recognition when she won First Prize in the Chopin Competition in 2010, is always uncompromisingly and profoundly devoted purely to the music itself. Conjuring an impeccable combination of clarity, energy and elegance, she wins audiences with compelling honesty, wit and musical judgement.

Avdeeva's artistic integrity is rapidly ensuring her a place amongst the most distinctive artists of her generation. Following her Los Angeles Philharmonic debut with Gustavo Dudamel in May 2019, Avdeeva ventures on a dynamic 2019/20 season which includes debuts with Orchestra Philharmonique de Radio France unter the baton of Santtu-Matias Rouvali, Baltimore Symphony Orchestra and Marin Alsop, and a return to Pittsburgh Symphony Orchestra under Sir Mark Elder's direction. Further highlights include new orchestra collaborations with SWR Symphonieorchester, Gürzenich Orchestra Cologne, Dresden Philharmonic and Sinfonie Orchester Basel. In her native Russia, Avdeeva debuts at Zaryadye Concert Hall, following her recent return to St Petersburg Philharmonic.

Yulianna Avdeeva's Chopin performances have drawn particular praise, marking her out as one of the composer's foremost interpreters who brings out the strength as well as the refinement of his music. Her long association with the Fryderyk Chopin Institute has won her a huge following in Poland. She is a regular with the Warsaw Philharmonic and National Polish Radio Symphony orchestras with whom she has forged strong relationships. Avdeeva's third solo recording on Mirare, featuring works by Bach, has been released in 2017. She also recorded the Chopin concertos with the Orchestra of the Eighteenth Century and Frans Brüggen and a solo recording as part of a milestone collection dedicated to the brightest winners of the Chopin Competition between 1927 and 2010 on Deutsche Grammophon.

A committed chamber musician, she has worked with the Philharmonia Quartet and regularily tours throughout Europe with violinists Julia Fischer and Gidon Kremer appearing at the Festspielhaus Baden-Baden, Tonhalle Zurich, and Prinzregententheater Munich, amongst others. In recital, she has performed at London's International Piano Series and the Wigmore Hall, Moscow's Tchaikovsky Concert Hall and International House of Music, Rheingau Musik Festival, Barcelona's Palau de la Música Catalana, Liederhalle Stuttgart and Philharmonie Essen.

Avdeeva began her piano studies at the age of five with Elena Ivanova at Moscow's Gnessin Special School of Music and later studied with Scherbakov and Tropp. At the International Piano Academy Lake Como, she was taught among others by Naboré, Bashkirov and Fou Ts'ong. In addition to her Chopin prize, she has won several other prizes including at the Bremen Piano Contest, the Concours de Genève and the Arthur Rubinstein Competition. 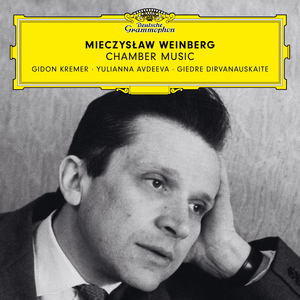 Following the success of the Weinberg Symphonies 2 & 21 with conductor Mirga Grazinyte-Tyla, Deutsche Grammophon releases chamber music by Mieczysław Weinberg under the direction of Gidon Kremer. The album features Weinberg's Three Pieces for Violin and Piano, which he completed when he was only 15 and had not yet received any compositional training, Dream About A Doll, and Sonata for Violin and Piano No. 6. Kremer is joined by Yulianna Avdeeva on piano and Giedrė Dirvanauskaitė on cello