In just a few years IL VOLO have performed worldwide, released top-selling albums, toured with legendary songstress Barbra Streisand, and taken the stage for three acclaimed PBS specials. The powerhouse trio is now returning to the States, following a prestigious win at the Sanremo Music Festival in Italy, which garnered them 3x Platinum in Italy for their latest EP and harnessed their sold-out summer tour. The trio – discovered and managed by Michele Torpedine,  who's been also talent scout and manager of Andrea Bocelli, Zucchero, Giorgia, Biagio Antonacci – features Piero Barone, Ignazio Boschetto and Gianluca Ginoble. The three young singers bring American audiences their best live performances of pop and traditional English, Italian and Spanish songs, accompanied by symphony orchestras.

In September 2015, IL VOLO released L'Amore Si Muove, their third studio album for Sony Music, produced by Michele Torpedine, Celso Valli, Cheche Alara, and Emilio Estefan. Radio  airings of the title track are driving the lead up to the release, which will be followed by a 35-date US tour. IL VOLO will open in Buffalo, on 5 February 2016, through April, with venues that include Miami, Los Angeles, Chicago and other cities.

After entrancing Ti Lascio Una Canzone fans with their cover of the Neapolitan ‘O Sole Mio, the international spotlight quickly lit up for IL VOLO. In no time they found themselves signing a worldwide deal with Interscope Records/Universal Music Group, the first Italian artists ever to be signed for a US label. The trio is now working on their debut album in Los Angeles, Rome, and London (where they recorded at the famous Abbey Road Studios).

In November 2010, IL VOLO released their self-titled debut – later certified platinum – album in Italy. At the time of worldwide release in April 2011, this lovely collection of classics, opera selections and soulful ballads debuted at number ten in the Billboard Top 200 chart, eventually reaching the number six slot. IL VOLO then caught the attention of Quincy Jones, who asked the trio to join superstars like Celine Dion and Josh Groban on the charity single We Are The World: 25 for Haiti.

In 2011, the group was nominated for the Latin GRAMMY® Awards in two categories: "Best New Artist" and "Best Pop Album by a Duo or Group".

Released in November 2012, just as IL VOLO were wrapping up their tour with Barbra Streisand, the group's second studio album We Are Love definitely has a more pop feel but loyal to their trademark classic sound. Backed by the finesse of the Czech Symphony Orchestra, IL VOLO performed their stunning versions of selections that feature guest appearances by the great Placido Domingo (on Il Canto, in homage to Luciano Pavarotti, an inspiration for IL VOLO) and Italian singer-songwriter Eros Ramazzotti (on the tender ballad, Così).

After releasing We Are Love, IL VOLO was back with two more albums: Il Volo's We Are Love: Live from the Filmore Miami Beach at Jackie Gleason Theater and Buon Natale: The Christmas Album, which were Christmas stalwarts in iTunes Top 10 Albums.

IL VOLO can also boast top-selling tours in the US and in Latin America in 2013, with 50 dates in the continent's major cities and most prestigious venues. The year ended with Piero, Ignazio and Gianluca performing hymns and Christmas carols songs for the Assisi Concert, accompanied by RAI TV's National Symphony Orchestra, against the backdrop of one of the world's loveliest churches. This concert was recorded and broadcast on Christmas Day after the papal mass. IL VOLOwere also special guests alongside Gloria Estefan, Ivette Sangalo and Miguel Bosé at Laura Pausini's New York concert, held at the Madison Square Garden Theatre to celebrate her two decades in music.

In 2011, IL VOLO embarked on several tours, taking in Europe, North and South America. The trio not proved their astonishing vocal talent and awe-inspiring showmanship on record and on stage, they also performed for major TV shows including The Tonight Show, The Today Show, Good Morning America, The Talk,American Idol, The Ellen DeGeneres Show, The Rachael Ray Showand the 2013 Daytime Emmy Awards, as well as appearing in the final episode of HBO's Entourage, and starring in three PBS specials (Il Volo Takes Flight in 2012; Il Volo Buon Natale in 2013; and, most recently, Il Volo: Live from Pompeii in 2015). The ruins of Pompeii were the scenario for a concert that was the first in this legendary venue since Pink Floyd performed there in 1971. The exclusive concert was recorded and will be released as a DVD.

In 2014, the  trio returned to the States immediately after their first Billboard Latin Music Award win for Latin Pop Album – Artist of the Year, Duo or Group (for which they had previously received a nomination in 2013) and start their 2014 US summer tour of 15 cities.

In February 2015 IL VOLO were triumphant winners of the Sanremo Festival in Italy, and on 17 February 2015 released the EP Sanremo Grande Amore (Sony/Columbia). A blockbusting success for IL VOLO, who reached the number 1 slots in the iTunes EP, single and relative video rankings, with unbelievable Web numbers: over 42,000,000 views for the Grande Amorevideo (the most popular Italian song viewed on Vevo Italia), going straight to the top of the FIMI/Gfk bestselling albums and singles respectively with Sanremo Grande Amore (x2 platinum) and Grande Amore (platinum).

From 19 to 23 May, IL VOLO represented Italy in the Eurovision Song Contest 2015, achieving a runaway phone-in success, soaring up the European iTunes charts, and winning the Marcel Besançon Award 2015 from international critics.

After the triumph at Sanremo 2015, Il Volo have been unstoppable. They went straight to number 1 on iTunes with the EP, single and relative video (clocking up record-breaking numbers on the Web), and immediately garnered the FIMI/Gfk album and single bestselling positions for, respectively,Sanremo Grande Amore and Grande Amore, certified a 2x Platinum single.

Il Volo was the voice of Italy at the Eurovision Song Contest in 2015, voted one of the top three contestants, and the most popular among phone-in voters.

A tour in Italy's most magical venues for the summer of 2015 ended with the magnificent concert-event at the Arena di Verona, where the trio debuted tracks from the internationalL'Amore Si Muove album, released on 25 September and certified a 2x Platinum, soaring to the top of world charts.

In January 2016, the trio began its world tour of the US, Europe and Latin America, which reserved some of the globe's most prestigious stages for the boys.

From 27 to 31 July, Il Volo will be in Poland at the Krakow World Youth Day, performing live for world television on 30 and 31 July.

A  September release is scheduled by Sony Music for the CD and DVD of the concert-event.

Notte Magica - A Tribute To The Three Tenors 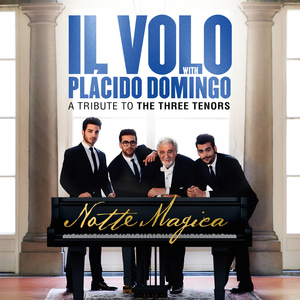 Following the success of their July 1 2016 concert in the magical setting of Piazza Santa Croce in Florence, Italy, IL VOLO announce the release of their new album Notte Magica – A Tribute to The Three Tenors with special guest, the legendary Plácido Domingo. The new album will give fans around the world the chance to re-live and experience this once-in-a-lifetime event. Maestro Domingo conducted the orchestra of the famous Teatro Massimo di Palermo in eight pieces that evening, and he also joined Il Volo to sing "Non ti scordar di me."  Maestro Marcello Rota alternated with Maestro Domingo as the conductor. The members of Il Volo – Piero Barone, Ignazio Boschetto and Gianluca Ginoble – performed songs that encompassed popular Neapolitan, Italian, and international music, blending in complete harmony with songs from famous musicals and renowned classical opera arias.

Notte Magica - A Tribute To The Three Tenors
http://www.ilvolomusic.com/en/