As an improvising musician, Jan Garbarek has said that he seeks to make his playing "fit the tone, texture and temperament of the music. It's about finding a common language."  The quest to explore that language has ranged widely across time and space, from the folk songs of his native Norway to improvisations around medieval polyphony and the music of the Indian subcontinent and Middle East, as well as jazz. In the course of these musical journeys, the intensely focused sounds of his tenor and soprano saxophones have become among the most instantly recognizable and haunting in contemporary music.

Garbarek was born in Mysen, Norway in 1947. His family later moved to Oslo and, at the age of 14, Garbarek first heard John Coltrane on the radio, which inspired him to take up the saxophone. Dexter Gordon, then a frequent visitor to Norway, also made a deep impression.

In 1962 Garbarek won a competition for amateur jazz players and for the rest of the decade worked regularly in Norway, usually as a leader, but he also spent four years with jazz composer and theorist George Russell, who would later describe him as "the most original voice in European jazz since Django Reinhardt". In 1969, ECM founder Manfred Eicher asked Garbarek to join the roster of his new record label. Garbarek's first ECM album was Afric Pepperbird.  "After we recorded it we knew we had something special," Eicher remembered. It was to be the first step in one of ECM's most distinguished recording careers.

Jan Garbarek rose to international fame in the mid-1970s playing with Keith Jarrett's European Quartet, which released the albums Belonging, My Song and the live recordings Personal Mountains, Nude Ants, and Sleeper. Such collaborations, in the words of Jarrett's biographer, Ian Carr, took "the art of classic jazz to its highest pinnacle".

Triptykon (1972) was the first recording on which Garbarek used a Norwegian folk song in his playing, a direction in which he had been encouraged by American trumpeter Don Cherry. "Whether I like it or not," Garbarek told one writer, "I am locked into a certain vocabulary or phraseology which is linked to Norwegian folk music."

In 1979, Garbarek recorded Photo with Blue Sky, the first of a series of albums with the Jan Garbarek Group, a regular touring band whose line-up would evolve over the decades. It was not until 2007 that they recorded a live album, however, the double CD, Dresden. As the Guardian wrote of the group on their 2007 tour: "The contrast between an intense jamming sound and the songlike simplicity of the tunes is always Garbarek's magic mix, but this version of the band has an exhilarating intensity."

Officium, one of the most significant recordings of Garbarek's career – and in the history of ECM – was made in 1993 in St Gerold monastery in Austria with the Hilliard Ensemble. Garbarek's sax – a "fifth voice" – weaves soaring, swooping lines around the polyphony of the vocal quartet, creating effects that are as entrancing as they are unexpected. In 1999 came a sequel, Mnemosyne, which ranged further across time in its musical material, and Officum Novum explored the crossroads between east and west, with particular focus on the music of Armenia.

Garbarek's restless musical imagination, so evident in his Hilliard collaborations and countless other projects over the years, keeps driving him forward. Of his musical journey he says: "It never really stands still. Not at any point in time can you say, ‘Now I reached something.'"

"We named ourselves after the Elizabethan miniaturist Nicholas Hilliard, not only because he was contemporaneous with much of the late 15th- and 16th-century music at the core of our repertoire, but also because he is renowned for his exquisite detailing and refined artistry - things we aspired to musically." David James, Countertenor

World-famous English a cappella quartet, The Hilliard Ensemble, gave its first concert in December 1973 in London and over the next four decades became widely admired for its exemplary performances of both old and new music.

The collaboration between the Hilliards  and ECM began in 1986 with Arvo Pärt's Arbos and led to acclaimed artistic achievements and great successes in old and new music alike, especially their vastly popular projects with improvising saxophonist Jan Garbarek, who provided a "fifth voice" on Officium, Mnemosyne and Officium Novum. Hilliard countertenor David James said of Garbarek: "His extraordinary improvising liberated us too; after working with him we were no longer static in front of our music stands, but are frequently to be found wandering round the churches and cathedrals without scores, as he does." Several of the group's discs have been international bestsellers, including all three Garbarek collaborations and Morimur (music by Bach, with Christoph Poppen). The group's ECM discography also includes music by Perotin, Machaut, Tallis, Gesualdo, Lassus, Pärt, Schnittke, Kancheli and Bryars.

Having recorded more than twenty albums for ECM, The Hilliard Ensemble capped its discography before retirement at the end of 2014 with a final release: Transeamus ("we travel on"), a collection of polyphony in two, three and four parts from 15th-century England. One of the Hilliard's very first recordings had included music from the court of Henry VIII; with Transeamus their odyssey through the ages came full circle. Stephen Pettitt wrote in the Sunday Times: "It's a euphonious, expressive music, and the Hilliard's four voices, as always, perform it with affecting poise and directness."

Remember Me, My Dear 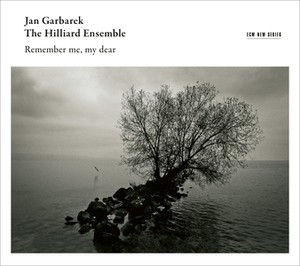 Garbarek blends with the vocal lines – sung captivatingly by the Hilliards – like a fifth voice. With restraint and the greatest of control he wanders and floats through the spaces created by the singers…The early music is not just given a modern sheen. Garbarek explores a space from the inside, but with a sound whose hymnic character and pathos cannot be denied. The music raises the question of what is old and what is new. - Peter Rüedi, Die Weltwoche

25 years on from the release of Officium, the groundbreaking alliance of Jan Garbarek and The Hilliard Ensemble, comes a live album from their unforgettable final tour. Remember me, my dear, named for the Scottish ballad which concludes the concert, was recorded in October 2014 at Chiesa della Collegiata dei Santi Pietro e Stefano in Bellinzona, in the Ticino canton of Switzerland. The album embodies all the special attributes of this unique alliance between the Norwegian saxophonist and the British vocal ensemble.

Remember Me, My Dear