Seven studio albums in fifteen years is, in itself, a measure of Jesse Cook's artistic success. And, for this latest recording he wanted to trace rumba flamenco back to its roots in Cuba. His instincts though got the better of him and he wound up spending time in Bogota, Colombia. The resulting body of work is sublime, a continuation of Cookʼs insatiable appetite for world music in all its forms.

Loyal fans will be thrilled with "The Rumba Foundation", as he has entitled the album, while those who have never before experienced Cook's creativity will find themselves tapping their feet to these extraordinary Latin rhythms wondering why they have not experienced Cook before.

"The Rumba Foundation" continues the journey Jesse Cook has travelled ever since he was first exposed to rumba flamenco while visiting his father in Arles in the south of France. What other teenager can lay claim to jamming with The Gypsy Kings on his father's roof? On this album Cook is maturing and his trip to Bogota appears to be time well spent.

"Colombia just took over this project," the Juno award winning guitarist admits with a laugh. "So now I describe it as
'returning to the Americas.'"

"I flew down to Colombia and worked with a group called Los Gaiteros de San Jacinto. They won a Latin Grammy back in 2007. They play traditional music known as Vallenato and they make all their own instruments by hand including gaitos flutes. I learned these flutes are always played in pairs and in only one key. They are doing it 'old school.'" The band members took a lengthy bus ride from their village in northern Colombia to meet their guest in Bogota. Then, following a dinner of home cooked Ajiaco, a traditional soup of avocado, chicken and potatoes, they performed an impromptu Vallenato concert right in the living room of their managerʼs house. The visitor was obliged to play some of the songs he wanted to record with them.

Hearing Cook's incendiary guitar playing they might well have been bemused wondering how the two styles would mesh. There really was no structure to this first encounter. Rather, Cook who also assumed the role of record producer, saw this as an opportunity to find a musical common ground which they would build upon in the studio over the following days.

It's a similar approach he took when recording the many different rhythms in Egypt, Spain and elsewhere for his two more recent studio albums "Frontiers and "Nomad" both of which, it should be noted, quickly climbed to #5 on the Billboard charts. "If I go down there and teach them what I want them to do what's the point in going down? I could just get somebody in Toronto to play it," he declares. "Half the reason you go down there, in their own country, their own studio, is that you are bound to bring something out of it that you would never get in your home country." Since his Juno Award nominated DVD "Jesse Cook Live at the Metropolis" which was filmed at the 2007 Montreal Jazz Festival, Cook may have slipped in and out of the spotlight at home. But he certainly hasn't been idle. This year alone he and his band have headlined jazz festivals in Dubai, Singapore, Poland and London, England. Invitations have also arrived to play in Ireland, Italy, Japan and even Turkey as
his reputation grows.

In 2008, he achieved something no one before him ever has. He dominated both the smooth jazz radio charts with his Top 3 single, Cafe Mocha, and the Billboard New Age chart with his #1 album Frontiers, which to date has spent over 70 weeks in the Top 10. "There is a Facebook page for Jesse Cook fans in Turkey," he says in disbelief, "I guess I have fans there. And, years ago, I played as a guest of 'The Chieftains' in Japan. We have since been getting more hits in Japan than anywhere outside the United States. I have this great fan base. It's just that I have never gone to play there." Earlier this year Acoustic Guitar magazine awarded Jesse the
Silver medal in its prestigious
Playerʼs Choice Awards.

Naturally he was delighted to be on the same flamenco podium as his hero, the legendary Paco de Lucia, who struck gold. "The Rumba Foundation" will enjoy its syndicated world wide premier in Los Angeles via the prominent jazz station 'The Wave' on September 25th. A live performance at L.A's famous
Greek Theatre follows.

Though the Colombian adventure features prominently on this disc as is his custom Cook covers a classic and manages to make it his own. This time its Simon and Garfunkel's "Cecilia". Another noteworthy track is La Rumba D'el Jefe which is a fusion of rumba flamenca with
Cuban son music.

"I do honestly think this is my best album ever, "Cook announces." I don't believe that Vallenato and Rumba Flamenco have ever been mixed before. There are some real magic moments." 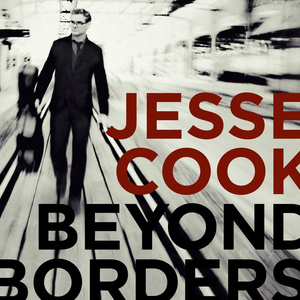 "There are many borders in our lives. Some are built by others, some we create for ourselves. Whenever I have ventured beyond the borders in my life, I have been the better for it. Beauty, humanity, artistry, joy, wisdom, and of course love…these things don't stop at some line on a page. If music is the universal language, maybe there is something it can teach us'"…Jesse Cook Following on the heels of One World's critical and commercial success, Jesse Cook is ready to launch his new album Beyond Borders. This is the most sonically diverse and distinctive disc in Jesse Cook's vast and varied catalogue. This catalogue has earned Jesse 11 Juno nominations and one Juno win for 2000's Free Fall. Beyond Borders is an in depth musical journey exploring the exotic boundaries of World Music.