Although chiefly known as the frontman of My Morning Jacket, singer and songwriter Jim James played a wider role in indie rock during the early 21st century, appearing on albums by several artists (including Bright Eyes and M. Ward) while pursuing a solo career. His approach on each album is different. His debut was 2009's Tribute To, a short collection of intimate George Harrison covers recorded shortly after the guitarist's death in 2001. Released in 2013, Regions of Light and Sound of God was a bright -- even giddy -- exercise in spirituality expressed by a truckload of styles and instrumentation, while its follow-up, 2016's Eternally Even, showcased a spacy, psychedelic, jazzy approach to 21st century soul and moody nocturnal funk infused with indie pop cool.

James is also a marked contributor to unique projects. He contributed to the New Basement Tapes, a group of studio collaborators who issued a compilation of unfinished, unreleased songs by Bob Dylan titled Lost on the River. Conceived of and produced by T-Bone Burnett, other performers included Elvis Costello, Marcus Mumford, Taylor Goldsmith, and Rhiannon Giddens. James resumed his role with My Morning Jacket for 2015's acclaimed The Waterfall and toured in support. In September of 2016, he announced the release of Eternally Even, co-produced with Blake Mills (Alabama Shakes). The gritty, tense, nine-song set was issued in November just before election day. James' next effort, Tribute to 2, issued in December of 2017, was an entirely different outing: It was a collection of cover songs that intentionally reflected hope and blurred the boundaries of time and genre. He interpreted songs by the Beach Boys, Abbey Lincoln, Sonny and Cher, Diane Izzo, Ray Noble and Al Bowlly, Elvis Presley, Willie Nelson, Bob Dylan, and Emerson, Lake and Palmer.

Teddy Abrams, Music Director of the Louisville Orchestra and Music Director and Conductor of the Britt Orchestra, is an acclaimed conductor, established pianist and clarinetist, and composer.  A tireless advocate for the power of music, Abrams promotes interdisciplinary collaboration with organizations including the Louisville Ballet, the Center for Interfaith Relations, Oregon Shakespeare Festival, the Speed Art Museum, and the Folger Shakespeare Library. Released on Decca Gold, All In-Abram's debut album with the Louisville Orchestra-featured Abrams' original work "Unified Field" and hit #1 on the US Classical Chart.

Guest conducting highlights include engagements with the Kennedy Center and with the Los Angeles Philharmonic; San Francisco, Houston, Vancouver, Milwaukee, New World, and New Jersey Symphonies; the Malaysian Philharmonic; and the Saint Paul Chamber Orchestra. He has enjoyed a longstanding relationship with the Indianapolis Symphony, and conducted them with Time for Three for a special recorded for PBS. He served as Assistant Conductor of the Detroit Symphony from 2012-2014.

Dedicated to exploring new and engaging ways to communicate with a diverse range of audiences, Abrams co-founded the Sixth Floor Trio as well as GardenMusic, the music festival of the world-renowned Fairchild Tropical Garden in Miami.

Abrams has studied conducting with Michael Tilson Thomas and was the youngest conducting student ever accepted to the Curtis Institute of Music.

Aiming to be "The Most Interesting Orchestra on the Planet", the Louisville Orchestra, under the leadership of the young and multi-talented Teddy Abrams, is a tirelessly adventurous ensemble that reflects the artistic energy of its native city. Home to the Kentucky Derby, Louisville Slugger, and the center of Kentucky bourbon culture from its unique perch on the banks of the Ohio River, Louisville embodies both Southern warmth and Northern vitality. Music thrives; and the Louisville Orchestra has embraced American composers and local performers since early in its history, founding First Edition Records and commissioning, performing, and recording newly-composed music since 1948. This unprecedented long-running commissioning program, inaugurated by visionary city mayor, Charles Farnsley, and funded early on by the Rockefeller Foundation, is documented in the Gramophone Award-winning film Music Makes a City. It's second nature to Teddy Abrams to pick up and expand this legacy. Crackling with charisma, energy, and charm, Teddy brings together people of all ages and experiences like a modern-day Pied Piper. He and the talented musicians of the "LO" have rekindled a joyful fire of exploration, collaboration and creativity in a community that continues to reach fearlessly toward the future.

The Order Of Nature 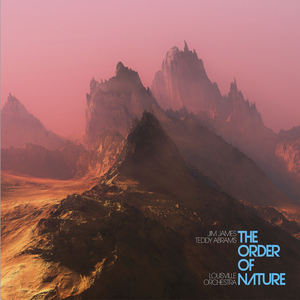 THE ORDER OF NATURE presents a hypnotic meeting of the classical and folk-rock worlds with both classic and brand-new material by Jim James (lead singer of critically/commercially successful My Morning Jacket) and fused with Teddy Abrams' inspired orchestrations with the Louisville Orchestra.

The Order Of Nature