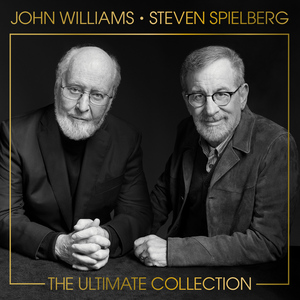 Read bio
1 Raiders March from "Raiders of the Lost Ark"
2 Theme from "Always"
3 Adventures on Earth from "E.T. The Extra-Terrestrial"
4 Theme from "Sugarland Express"
5 Title Theme from "Jaws"
6 Out to Sea / The Shark Cage Fugue from "Jaws"
7 Exsultate Justi from "Empire of the Sun"
8 Parade of the Slave Children from "Indiana Jones and the Temple of Doom"
9 Over the Moon from "E.T. The Extra Terrestrial"
10 March from "1941"
11 Cadillac of the Skies from "Empire of the Sun"
12 Scherzo for Motorcycle and Orchestra from "Indiana Jones and the Last Crusade"
13 Close Encounters of the Third Kind/When You Wish Upon a Star Medley
14 Flying from "E.T. The Extra-Terrestrial"
15 Theme From "Jurassic Park"
16 Remembrances from "Schindler's List"
17 Flight to Neverland from "Hook"
18 The Battle Of Hollywood From "1941"
19 Smee's Plan From "Hook"
20 The Barrel Chase From "Jaws"
21 My Friend,The Brachiosaurus from "Jurassic Park"
22 Jim's New Life From "Empire Of The Sun"
23 The Dialogue From "Close Encounters Of The Third Kind"
24 The Lost Boys Ballet From "Hook"
25 Theme from "Schindler's List"
26 The Basket Chase from "Raiders Of The Lost Ark"
27 The Face Of Pan from "Hook"
28 The Banquet Scene from "Hook"
29 The Adventures of Mutt from "Indiana Jones and The Kingdom of the Crystal Skull"
30 Dry Your Tears, Afrika from "Amistad"
31 The BFG from "The BFG"
32 With Malice Toward None from "Lincoln"
33 The Duel from "The Adventures of Tintin"
34 A New Beginning from "Minority Report"
35 Movement 1: Closing In
36 Movement 2: Reflections
37 Movement 3: Joy Ride
38 Marion's Theme from "Raiders of the Lost Ark"
39 Hymn to the Fallen from "Saving Private Ryan"
40 Dartmoor, 1912 from "War Horse"
41 Viktor's Tale from "The Terminal"
42 Prayer for Peace from "Munich"
43 Immigration and Building from "The Unfinished Journey"
44 With Malice Toward None from "Lincoln"
45 Steven Spielberg & John Williams: The Adventure Continues
Show all tracks
Hide

Celebrating one of the most definitive and beloved partnerships in the history of motion pictures, John Williams & Steven Spielberg: The Ultimate Collection delivers an essential sampling of Williams's musical scores for Spielberg's films – a critically acclaimed, award-winning, chart-topping collaboration now in its fifth decade. Comprised of a three-CD set and bonus DVD, this collection brings together Williams's two previous discs of his music for Spielberg films, which he recorded with the Boston Pops Orchestra for Sony Classical: The Spielberg/Williams Collaboration (1991) and Williams on Williams: The Classic Spielberg Scores (1995). Those discs include music from Sugarland Express (1974) through Jurassic Park andSchindler's List (1993).