In a career that spans five decades, John Williams has become one of America's most accomplished and successful composers for film and for the concert stage. He has served as music director and laureate conductor of one of the country's treasured musical institutions, the Boston Pops Orchestra, and he maintains thriving artistic relationships with many of the world's great orchestras, including the Boston Symphony Orchestra, the New York Philharmonic, the Chicago Symphony and the Los Angeles Philharmonic. Mr. Williams has received a variety of prestigious awards, including the National Medal of Arts, the Kennedy Center Honor, the Olympic Order, and numerous Academy Awards, Grammy Awards, Emmy Awards and Golden Globe Awards. He remains one of our nation's most distinguished and contributive musical voices.

Mr. Williams has composed the music and served as music director for more than one hundred films. His 40-year artistic partnership with director Steven Spielberg has resulted in many of Hollywood's most acclaimed and successful films, including Schindler's List, E.T.: The Extra-Terrestrial, Jaws, Jurassic Park, Close Encounters of the Third Kind, four Indiana Jones films, Saving Private Ryan, Amistad, Munich, Hook, Catch Me If You Can, Minority Report, A.I.: Artificial Intelligence, Empire of the Sun, The Adventures of TinTin and War Horse. Their latest collaboration, The BFG, was released on July 1, 2016. Mr. Williams has composed the scores for all seven Star Wars films, the first three Harry Potter films, Superman: The Movie, JFK, Born on the Fourth of July, Memoirs of a Geisha, Far and Away, The Accidental Tourist, Home Alone, Nixon, The Patriot, Angela's Ashes, Seven Years in Tibet, The Witches of Eastwick, Rosewood, Sleepers, Sabrina, Presumed Innocent, The Cowboys and The Reivers, among many others. He has worked with many legendary directors, including Alfred Hitchcock, William Wyler and Robert Altman. In 1971, he adapted the score for the film version of Fiddler on the Roof, for which he composed original violin cadenzas for renowned virtuoso Isaac Stern. He has appeared on recordings as pianist and conductor with Itzhak Perlman, Joshua Bell, Jessye Norman and others. Mr. Williams has received five Academy Awards and 50 Oscar nominations, making him the Academy's most-nominated living person and the second-most nominated person in the history of the Oscars. His most recent nomination was for the film Star War: The Force Awakens. He also has received seven British Academy Awards (BAFTA), 22 Grammys, four Golden Globes, five Emmys, and numerous gold and platinum records.

Born and raised in New York, Mr. Williams moved to Los Angeles with his family in 1948, where he studied composition with Mario Castelnuovo-Tedesco. After service in the Air Force, he returned to New York to attend the Juilliard School, where he studied piano with Madame Rosina Lhevinne. While in New York, he also worked as a jazz pianist, both in nightclubs and on recordings. He returned to Los Angeles and began his career in the film industry, working with a number of accomplished composers including Bernard Herrmann, Alfred Newman, and Franz Waxman. He went on to write music for more than 200 television episodes for anthology series Alcoa Premiere, Kraft Suspense Theatre, Chrysler Theatre and Playhouse 90. His more recent contributions to television music include the well-known theme for NBC Nightly News ("The Mission"), the theme for what has become network television's longest-running series, NBC's Meet the Press, and a new theme for the prestigious PBS arts showcase Great Performances.

In addition to his activity in film and television, Mr. Williams has composed numerous works for the concert stage, among them two symphonies, and concertos for flute, violin, clarinet, viola, oboe and tuba. His cello concerto was commissioned by the Boston Symphony Orchestra and premiered by Yo-Yo Ma at Tanglewood in 1994. Mr. Williams also has filled commissions by several of the world's leading orchestras, including a bassoon concerto for the New York Philharmonic entitled The Five Sacred Trees, a trumpet concerto for the Cleveland Orchestra, and a horn concerto for the Chicago Symphony Orchestra. Seven for Luck, a seven-piece song cycle for soprano and orchestra based on the texts of former U.S. Poet Laureate Rita Dove, was premiered by the Boston Symphony at Tanglewood in 1998. At the opening concert of their 2009–2010 season, James Levine led the Boston Symphony in the premiere Mr. Williams' On Willows and Birches, a concerto for harp and orchestra.

In January 1980, Mr. Williams was named nineteenth music director of the Boston Pops Orchestra, succeeding the legendary Arthur Fiedler. He currently holds the title of Boston Pops Laureate Conductor which he assumed following his retirement in December 1993, after 14 highly successful seasons. He also holds the title of Artist-in-Residence at Tanglewood.

One of America's best known and most distinctive artistic voices, Mr. Williams has composed music for many important cultural and commemorative events. Liberty Fanfare was composed for the rededication of the Statue of Liberty in 1986. American Journey, written to celebrate the new millennium and to accompany the retrospective film The Unfinished Journey by director Steven Spielberg, was premiered at the "America's Millennium" concert in Washington, D.C. on New Year's Eve, 1999. His orchestral work Soundings was performed at the celebratory opening of Walt Disney Concert Hall in Los Angeles. In the world of sport, he has contributed musical themes for the 1984, 1988, and 1996 Summer Olympic Games, the 2002 Winter Olympic Games, and the 1987 International Summer Games of the Special Olympics. In 2006, Mr. Williams composed the theme for NBC's presentation of NFL Football.

Mr. Williams holds honorary degrees from 21 American universities, including The Juilliard School, Boston College, Northeastern University, Tufts University, Boston University, the New England Conservatory of Music, the University of Massachusetts at Boston, The Eastman School of Music, the Oberlin Conservatory of Music, and the University of Southern California. He is a recipient of the 2009 National Medal of Arts, the highest award given to artists by the United States Government. In 2003, he received the Olympic Order, the IOC's highest honor, for his contributions to the Olympic movement. He served as the Grand Marshal of the 2004 Rose Parade in Pasadena, and was a recipient of the Kennedy Center Honor in December of 2004. Mr. Williams was inducted into the American Academy of Arts & Sciences in 2009, and in January of that same year he composed and arranged Air and Simple Gifts especially for the first inaugural ceremony of President Barack Obama. 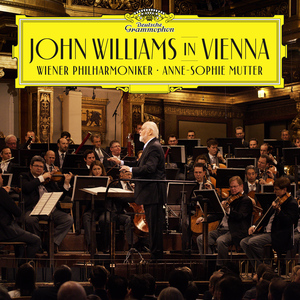 John Williams has just added to an already incredibly long list of achievements by making his conducting debut with the Wiener Philharmoniker. Their two concerts at Vienna's Musikverein on January 18 & 19, 2020 – which were also the first performances he had ever conducted in continental Europe – were produced by Deutsche Grammophon in partnership with the Wiener Philharmoniker and ServusTV and filmed by Bernhard Fleischer Moving Images (BFMI). John Williams in Vienna is now set for international release by the Yellow Label on August 14, 2020 and will be available on all relevant physical and digital mediums, including Blu‑ray, CD, vinyl and eVideo, in both stereo and Dolby Atmos surround mixes. The film will be broadcast in Germany, Austria and Switzerland by ServusTV on Whit Monday June 1, 2020.

A Life in Music

Revenge of the Sith Soundtrack
http://www.johnwilliamscomposer.com/