Tenor Jonas Kaufmann possesses an operatic and concert repertory that spans several centuries, taking in Monteverdi and J.S. Bach and reaching into the twentieth century with works by Schoenberg and contemporary composers. The vast area in between includes Mozart, Beethoven, Weber, Berlioz, Schubert, Wagner, Gounod, Mahler, Puccini, and much else. But Kaufmann willingly ventures into the obscure or little-known realms: he has appeared on disc in Marschner's Vampyr and in the world-premiere recordings on the Capriccio label of two neglected nineteenth century operas, Josef Abert's Ekkehard, where he sang the title role, and Carl Loewe's The Three Wishes, where he portrayed Hassan. Kaufmann is a major operatic star and has sung at the most prestigious venues in New York, Chicago, Paris, Vienna, Zurich, Frankfurt, Milan, and many others. While his discography clearly suggests a preference for opera, he has sung much concert fare, including Mahler's Das Lied von der Erde and Beethoven's Ninth Symphony, as well as lieder (Harmonia Mundi issued an acclaimed disc of Richard Strauss lieder in 2006). Kaufmann has made numerous recordings for a variety of labels, including EMI Classics, Decca, Philips, Arthaus Musik, and TDK.

Jonas Kaufmann was born in Munich, Germany, in 1969. As a child he was frequently taken to the opera by his father, while he sang in boys' choirs and took piano lessons. Later he enrolled at the Hochschule für Musik in Munich, where he took master classes from Hans Hotter, Josef Metternich, and James King. It was Hotter who interested Kaufmann in the lieder of Richard Strauss.

Romantic Arias From 1994-1996 Kaufmann sang at the opera house in Saarbrücken. Since the mid-1990s he has made regular guest appearances at the world's major opera houses. In 2001 he joined the Zurich opera and has since received high praise there for his Mozart (Idomeneo, Titus, Tamino), Gounod (Faust) and Verdi (the Duke). Kaufmann's first major recordings began appearing around the turn of the century, with Loewe's The Three Wishes (2000) and Marschner's Vampyr (2002). His debut recital at Wigmore Hall in London in December 2002 was a great success, as was his debut at the Met in February 2006 in the role of Alfredo in La Traviata. Kaufmann's recordings have appeared with increasing frequency in the new century. The 2008 Decca CD Romantic Arias, which includes arias from Tosca, La bohème, La Traviata, and other operatic standards, was his first solo recording. His 2013 Verdi Album and 2014 You Mean the World to Me topped both pop and classical charts in Germany and Austria.

The Age of Puccini 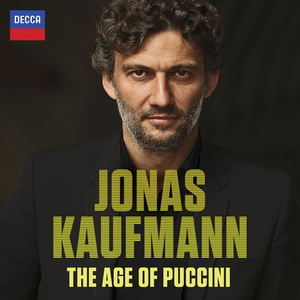 Jonas Kaufmann became the first German tenor to sing Cavaradossi at the Metropolitan Opera in 103 years. He shaped Puccini's music with exceptional elegance, balancing the character's essential revolutionary fervor with a heart-stopping tenderness. Critics and audiences received the portrayal ecstatically. Listeners familiar with Kaufmann's artistry in German and French repertoire exclusively will be astonished by his affinity for Italian music of the late nineteenth and early twentieth centuries. Having welcomed him as Cavaradossi in 2008, Covent Garden presented his first Maurizio in 2010 and his debuts as Des Grieux in Manon Lescaut in 2014 and as Andrea Chénier in 2015. The current collection highlights many of these roles as recorded for Decca.

An Italian Night - Live from the Waldbuhne Berlin

The Age of Puccini

You Mean the World to Me