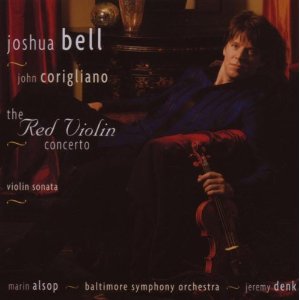 Joshua Bell and John Corigliano, two renowned artists in the world of classical music, have reunited for the world premiere recording of The Red Violin Concerto.

In Bell's first release since winning the Avery Fisher Prize, he rekindles a collaboration with Corigliano that began nearly a decade ago, when the violinist was signed on as musical consultant and soloist for Francois Girard's movie-in-progress The Red Violin. The film told the story of a haunted violin that dramatically alters the lives of all its owners over the span of three centuries.  When it was determined that some original music was needed, Bell was instrumental in the choice of Corigliano, whose many landmark compositions include his Symphony No. 1 (1991, Grawemeyer Award), Symphony No. 2 (2001, Pulitzer Prize) and the opera The Ghosts of Versailles, which had its world premiere at the Metropolitan Opera in 1991, to critical acclaim and sold-out houses.

When Corigliano examined the script for The Red Violin, he realized that "a story this episodic needed to be tied together with a single musical idea. For this purpose, I used the Baroque device of a chaconne: a repeated pattern of [seven rising] chords upon which the music is built." Later, while the movie was being filmed, he composed the seven-minute Red Violin Chaconne. While he was happy with the result, he also knew that the piece was too brief to be performed by itself in orchestral concerts by leading artists.

Although Corigliano won the Academy Award for the year's best original score in 1999 for The Red Violin, proclaiming in his acceptance speech "Joshua Bell played like a God," he wasn't entirely satisfied and longed to develop the chaconne into a larger work. A number of symphony orchestras around the U.S. were approached to commission a new concerto from Corigliano. With the Baltimore Symphony on board, the chaconne became the first movement, with Corigliano composing three more to make the piece a full-blown concerto.

While it's common to have movies spawn sequels, it's rare that they spawn concertos. But such is the case with The Red Violin Concerto which premiered in September 2003, with Marin Alsop conducting the Baltimore Symphony and Bell as soloist. Later, in 2006, the CD was recorded with the chaconne dominating the first movement; the second movement takes the form of a dramatic scherzo; the third features a recitativo that re-introduces the film's principal theme. The fourth movement features one of Corigliano's most virtuoso effects: an enormous, almost atonal, crunch from which various pitches slowly emerge. According to Corigliano, "the violin (and orchestra strings) are asked to press so hard on their strings that there is not a pitch at all, just a crunch." The "crunch" is splendidly resolved by Corigliano in the final measures.

Says Corigliano, "A concerto really is a very interesting thing today, because it poses the single artist, like the tiny violin, against 75 or 80 people in the orchestra who are playing dozens and dozens of the same instrument.  And so you have to psychologically understand how the great artist surmounts the orchestra.  Because that's really what the romantic concerto is about.  And this is a kind of romantic concerto in that way.  It's the soloist as hero and the orchestra as protagonist. It's a never-ending battle, where the hero has to come out with his tiny piece of wood and soar above everything else."

The Red Violin Concerto demonstrates Corigliano's skill at creating rich orchestral color. "Just listen to the concerto's slow movement," says Bell. "John staggers all the strings and gets this kind of ethereal echo chamber effect. When John first showed me the score," says Bell, "I was a little wary about the crunch. With my Stradivarius, I was hesitant to make such a sound. The crunching distortion is almost like the distortion you get on a rock guitar. Yet it goes along with the character of the piece."

Another dazzling effect in the final movement of The Red Violin Concerto is the "race" between the orchestra and soloist. "It's not easy to pull that off," says Bell. "The orchestra is pulling ahead of you, and yet it's not random. It's a very neat effect. It's an epic piece-- very romantic and dramatic and it can draw you in with its with its melodies, which is wonderful to say about a  new piece," says Bell.

As to the pressure of performing a premiere recording Bell comments that "There's a lot of pressure because this will be looked back on hundreds of years from now. Already it is being performed by many violinists which is great for a new work. But they will look back at mine as being the premiere recording and the definitive one so it's daunting, but very exciting."

"Says Corigliano, "Josh brings the kind of laser mind and the rhythmic wildness of the 21st century and 20th century into a  tradition of playing that is really quite older.  And he manages to merge the ages.  He's a young violinist, but he's also ... in the great tradition, a violinist.  And  I tried to write a piece in which that kind of violinist can really dig in."

On this new recording, The Red Violin Concerto is paired with another Corigliano work, the Sonata for Violin and Piano. Corigliano wrote the sonata during 1962-63 and was also featured in the film. With its jazz-style infusions, it may remind listeners of some of the works of Leonard Bernstein. The sonata is also a highly virtuosic work, with frequent meter changes, and in the final movement, what Corigliano describes as "polytonal perpetual motion." On Sony's recording, the sonata's fiendishly difficult piano part is performed by Jeremy Denk, a leading interpreter of contemporary music who frequently collaborates with Bell.

Bell has a longer history with the sonata than the new concerto. "I performed the sonata when I was maybe twenty years old--long before I ever met John Corigliano. It's a very tuneful and appealing piece-very flashy. It does have a kind of Bernstein influence and strikes the same emotional chord with me that great classical works do," says Bell.

The release of The Red Violin Concerto follows a seminal year for Bell highlighted not only by his receiving the coveted Avery Fisher Prize, but in being the only U.S. musician named by the World Economic Forum as one of the 250 Young Global Leaders as well as his appointment to the Indiana University's Jacobs School of Music faculty as a senior lecturer.

In Bell's concerts and recordings, his bold, charismatic artistry has brought a fresh voice to the most venerable masterpieces while also uncovering lesser known gems and new works.  As an exclusive Sony Classical artist who has created a richly varied catalogue of recordings, recently released is The Essential Joshua Bell, while Voice of the Violin continues to soar on the heels of Romance of the Violin which Billboard named the 2004 Classical CD of the Year, and Bell the Classical Artist of the Year. His live recording of the Tchaikovsky Violin Concerto continues to win critical acclaim. He is the recipient of numerous awards including the Grammy Award for his recording of The Maw Violin Concerto, Germany's Echo Klassik for Sibelius/Goldmark concerto recording with Esa-Pekka Salonen and the Los Angeles Philharmonic Orchestra, and the Gramophone Award for his recording of the Barber and Walton violin concertos and Bloch's Baal Shem.

Bell's complete schedule is at www.joshuabell.com  He will be performing movements from The Red Violin Concerto: