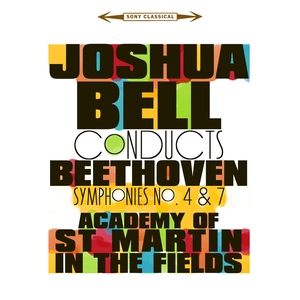 JOSHUA BELL'S
FIRST RECORDING AS
MUSIC DIRECTOR OF THE ACADEMY OF ST MARTIN IN THE FIELDS:

BEETHOVEN'S SYMPHONIES
NO. 4 AND NO. 7
ON SONY MASTERWORKS

"The power of Bell's communication is astonishing. The dazzling execution and powerful expression are mesmerizing. If classical concerts always reached the exciting energy demonstrated by his partnership with the ASMF, moguls of the classical industry could stop worrying about how to keep the tradition alive."    - The Australian

Few new recordings of such canonical works as Beethoven symphonies can claim status as true events these days, but Joshua Bell's first recording as Music Director of the Academy of St Martin in the Fields is just that. Bell leads the London orchestra in Beethoven's Symphonies No. 4 and No. 7 – from the violin. He bothconducts and plays from the concertmaster chair, sometimes contributing to the fabric of sound with his instrument; other times lifting his bow to exhort and emphasize. On February 12 2013, Sony Classical releases the Beethoven recording, which follows Bell and the Academy's lauded version of Vivaldi's Four Seasons from 2008. Classics Today gave that album high praise, pointing how it "scorches and sizzles. . . Bell and his first-rate partners make beautiful music out of Vivaldi's conceptions."

Bell has a rich history with the Academy having recorded Romance of the Violin, named Billboards' 2004 Classical CD of the Year, and Joshua, the Classical Recording Artist of the Year. Furthermore, it was with the Academy that Bell made his very first concerto recording, at age 21 in 1988, of the Bruch and Mendelssohn violin concertos.

Bell leads the Academy into a new era as the first person and first person to be named Music Director of the Academy, since it was founded by the great violinist-conductor Sir Neville Marriner in 1958.   Bell's recent 2012 U.S. tour with the orchestra garnered rave reviews, with one orchestra member blogging in Gramophone magazine: "The audience reaction has been nothing short of rock concert enthusiasm."  While the [London] Times noted: "they play with a sharp attack, rhythmic punch and a new joy in living…A new golden age might be here."Their recording of Beethoven's Symphonies No. 4 and No. 7, made at the famed Air Studios in London, is just the first, as they traverse the composer's entire cycle.

Over his 30 years as a top soloist, Bell has come to know Beethoven intimately through playing his violin concerto. Moreover, the violinist has had the chance to study virtually all the great conductors of his day, while interpreting the symphonic repertoire that is inevitably paired with a concerto on any given program. Bell says: "That has been my education - watching conductors deal with the corners and details of the music. Part of the excitement of doing these Beethoven symphonies is the opportunity to try and get them to sound the way I've always imagined. The Seventh was probably the first symphony I fell in love with, at 13 or 14 years old, which I listened to over and over. I had a video of Carlos Kleiber conducting the Fourth and Seventh that I loved as a teenager. He totally inhabits the music as he stands in front of the orchestra; the music always front and center, with nothing over done or under done. John Eliot Gardiner and Sir Roger Norrington were conductors I worked with who were also of great influence."

Beethoven composed his Symphony No. 4 in B-flat Major, Op. 60, in 1806, which saw the completion of his Fourth Piano Concerto, Violin Concerto and three "Razumovsky" String Quartets of Op. 59. Referring to its place between the turbulent Symphony No. 3 "Eroica" and granitic Symphony No. 5, Robert Schumann described the Fourth Symphony as "a slender Grecian maiden between two Nordic giants." The work begins with a theatrically brooding, B-flat minor introduction in the Haydn manner before surging forth with good-natured brio, Allegro vivace. Clouds pass over intermittently in the slow movement, with the wistful repose shattered midway by one of Beethoven's most compelling orchestral thunderbolts; yet the sweet sunshine soon returns, putting an optimistic frame around this emotional core of the work. Both the scherzo and finale alternate reflective, lyrical episodes with a propulsive forward momentum, the symphony coming to a spirited finish.

Beethoven completed his Symphony No. 7 in A Major, Op. 92, six years after No. 4. The premiere came in an 1813 charity concert for Austrian and Bavarian soldiers wounded in a battle with Napoleon's army; the composer himself conducted an all-star orchestra. Beethoven's Seventh fairly bursts with rhythmic energy – even the expansive slow introduction is driven by an elemental excitement. Repetitive rhythmic patterns are the symphony's fundamental characteristic; the coda to the galloping first movement features such obsessive repetitions that Carl Maria von Weber reportedly wondered whether the composer was "ripe for the madhouse." Later, Wagner famously dubbed the Seventh "the apotheosis of the dance" for its sheer profusion of rhythm, the Scherzo and Finale both spinning like tops. But the most popular part of the Seventh has always been its A minor slow movement – an Allegretto having the soul of a funeral march, with mesmerizing ostinato repetition and a stirring main melody. At the symphony's premiere, the audience demanded that the Allegretto be encored.

Explaining the technique of directing a symphony from the violin, Bell says: "If you have the right chemistry and the right language with an orchestra, you can give quite a bit of information to the ensemble from the first violin chair. Of course, there are limitations to the cues you can give when you're just playing, so there are many times during a performance when I don't play but rather conduct using my bow as a sort of baton. In these two Beethoven symphonies, much of the music is driven from the first violins, so that my cues as leader of the section can really spur the orchestra. Because of this, the pieces feel like chamber music in that everyone in the orchestra is listening closely, whether it's to me or to the principal cellist or to another part of the orchestra."

"Everyone has to play on the edge of their seats," Bell adds. "The way you approach making music shouldn't be different whether you're in a string quartet or a symphony orchestra or the soloist in a concerto. The ideal should be the same: close listening, give and take."

The recapitulation in the first movement of the Fourth Symphony is a signal moment on this album for Bell, a big crescendo that builds and builds until it finally bursts into the main theme again. He says: "It's one of the most glorious musical moments – a burst of pure joy. I hope the way we manage that brings a smile to the faces of people who know the piece well. And I hope people who are coming to this music for the first time are just uplifted by it. If we've done our jobs right, hearing this music should make you feel as if you're in the presence of one of the greatest human minds and spirits who ever lived. Beethoven, Shakespeare – there is only handful of people like that in history, universal artists who can lift the soul, who can give you a sense of wonder at being alive, just like when you're seeing a beautiful sunset, putting me in touch with that spiritual sense of awe and joy."

With nearly 40 albums to his credit, Bell has captured the public's attention like no other classical violinist of his time, enchanting audiences worldwide with his breathtaking playing and tone of rare beauty. The New York Times has said: "Mr. Bell stands in no one's shadow." Bell has been recognized as a Young Global Leader by the World Economic Forum, he serves on the artist committee of the Kennedy Center Honors and is on the board of directors of the New York Philharmonic. He has been an exclusive Sony Classical artist for more than a decade. Bell has been in the national spotlight since age 14 (when he made his orchestral debut with Riccardo Muti and the Philadelphia Orchestra), and he has been a recording artist since age 18. Acclaimed for the wide range of music he has chosen to record, Bell has covered the great concerto repertoire from Beethoven and Barber to Nicholas Maw, as well as collaborated with a diverse range of artists on At Home with Friends – from Sting and Chris Thile to Kristin Chenoweth and Chris Botti. Bell has ventured into bluegrass-inspired music with Short Trip Home and recorded the jazz-influenced Gershwin Fantasy and the Bernstein-inspired West Side Story Suite. His interest in film is notable: He performed all the violin solos in The Red Violin, helping the film win an Oscar for the Best Original Score (written by John Corigliano). He has received pop-culture recognition having been the first to have a classical video played on VH1, appearing as himself on Sesame Street and alongside Meryl Streep in Music of the Heart while being a frequent guest on late-night talk shows. People Magazine named Bell one of their "50 Most Beautiful," while The Washington Post has heralded Bell as "one of the finest musicians of his generation."
For more information on Joshua Bell, please visit www.joshuabell.com.

The Academy of St Martin in the Fields is renowned for its ability to produce ‘chamber music on a grand scale'. Founded in 1958 by Sir Neville Marriner, now Life President, the orchestra is now directed from the leader's chair by new Music Director and violinist Joshua Bell. More recently the Academy has developed a successful partnership with internationally renowned pianist Murray Perahia, who has been Principal Guest Conductor since 2000. The concept of the conductor-less ensemble, however, has remained the guiding principle of the Academy of St Martin in the Fields' artistic policy and, over the years has been strengthened through its associations with high profile artists including Julia Fischer, Julian Rachlin, Janine Jansen and Anthony Marwood.