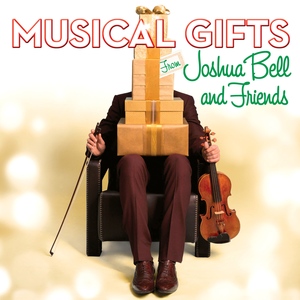 JOSHUA BELL AND FRIENDS
SHARE THEIR MUSICAL GIFTS
FOR THE HOLIDAYS

With Musical Gifts from Joshua Bell and Friends, world-renowned violinist Joshua Bell recreates his family's tradition of having friends come to his home during the holidays and joining in on songs that celebrate the warmth, beauty and magic of the season. Following the concept of his critically acclaimed album, At Home with Friends, Bell collaborates with a variety of special guests including Gloria Estefan, Alison Krauss, Kristin Chenoweth, trumpeter Chris Botti, jazz greats Chick Corea and Branford Marsalis, opera stars Plácido Domingo and Renée Fleming, Michael Feinstein, Frankie Moreno, a cappella group Straight No Chaser, and classical artists Steven Isserlis and acclaimed classical comedy duo Igudesman-Joo. Co-produced by Steven Epstein and David Lai, Musical Gifts is available from Sony Masterworks.

Musical Gifts includes repertoire representing a variety of holiday traditions. The CD also relates to Bell's Romance of the Violin album, and its follow-up Voice of the Violin. "On both of them, I took popular classical or non-classical songs and adapted them for my instrument," says Bell. "The idea goes back to the violinists like Jascha Heifetz, who recorded with Bing Crosby, and my hero Fritz Kreisler, who often rearranged other composers' works so delightfully. I also love the idea of celebrating music in ways different from how it was originally written, bringing in new arrangements and creating new repertoire for my instrument," Bell adds.

Opening the album is vocal goddess Alison Krauss, singing "God Rest Ye Merry Gentlemen." "She's someone I've admired from afar for many years," says Bell. "The stunning arrangement highlights the intonation and purity of her voice."

Bell credits guitarist/violinist Rob Moose, who has performed with Antony and the Johnsons and Bon Iver, for his brilliant arrangement of various tracks on Musical Gifts.  Moose's arrangement of "Let It Snow" starts out with a gypsy violin piece, then swings with Joshua and Grammy-nominated guitarist Julian Lage trading licks.

"I'll Be Home for Christmas," features pianist and vocalist Frankie Moreno singing a melancholy collaboration arranged by Bell and Moreno. On the endearing Fay Foster holiday song, "I Want an Old-Fashioned Christmas," Renee Fleming graces this arrangement with her gorgeous soprano.

Bell has longstanding friendships with Chris Botti and Kristin Chenoweth, who perform on "White Christmas" and "O Holy Night" respectively. "Chris and I went to school together in Bloomington, Indiana when we were 16," says Bell.  "Kristin and I have performed in concert together and she joined me on my album At Home with Friends."

"In America, Christmas transcends religion. It's a time for family celebration, and I wanted Musical Gifts to be a little broader," notes Bell. "Being that my late father was a former Episcopal priest and my mother is Jewish, I wanted to create a body of work that celebrates both traditions and captures the feeling of the holidays," Bell adds. The pieces that make up "Nutcracker Medley," while not Christmas songs per se, are closely associated with the holidays, and here feature another Indiana connection with Straight No Chaser, the a cappella group formed at Indiana University in Bloomington. Notes Bell, "I knew I wanted to do ‘Nutcracker' in some form or other, and they came on board creating an orchestra with their voices!"

It was Bell's inspiration to create a new arrangement of "Baal Shem: Simhat Torah (Rejoicing)," a piece composed by Ernest Bloch and performed with cellist Steven Isserlis and pianist Sam Heywood. "It's a Jewish celebration of the Torah," explains Bell. "This piece was originally written for violin and piano and we added texture by adding in the cello."

Musical Giftsalso includes traditional classical songs like "Ave Maria." "Everyone knows the versions by Bach, Gounod and Schubert, but this version by my favorite French composer Faure was even new to me," says Bell.  A religious feel was created for this using the cello, violin and organ.

The legendary tenor, Plácido Domingo, has always been greatly supportive of Bell, but his vocal on "O Tannenbaum" marks their first collaboration. "As a violinist, we emulate singers and admire them the most," reflects Bell.

Bell also wanted to include "the new Victor Borges of classical music," violinist Aleksey Igudesman and pianist Richard Hyung-ki Joo on Musical Gifts.  "They mix classical music and comedy and have a big following in Europe and in the States," Bell says. "We had fun creating ‘Christmas Confusion,' a conflicted holiday song where we mix both Jewish and Christmas traditions." Cleverly composed and arranged by Igudesman, the tune took on a life of its own, blending "Silent Night" with "Jingle Bells," "Hava Nagila" and even "The Dreidel Song." "It's a parody on the holidays, and something that will definitely make people smile," continues Bell.

On Musical Gifts, Bell also performs with Chick Corea on "Greensleeves," Branford Marsalis on a gospel version of "Amazing Grace," with the Young People's Chorus of New York City on a standalone version of "Silent Night," and with Michael Feinstein on the Jimmy Van Heusen/Sammy Cahn Christmas song, "The Secret of Christmas."

Last but not least, a holiday album wouldn't be complete without "A Christmas Auld Lang Syne," delivered by Gloria Estefan.  Accompanied by Cuban-American band Tiempo Libre, the traditional song has a Latin-infused flavor arranged by Jorge Gomez.

Each of the songs on Musical Gifts from Joshua Bell and Friends help to showcase Bell's vision of the holidays.  "During this time of year we love to celebrate by exchanging gifts and what could be better than the gift of music?" asks Bell.