Joy Harjo is an internationally renowned performer and writer of the Muscogee (Creek) Nation. She is serving her second term as the 23rd Poet Laureate of the United States.

The author of nine books of poetry, including the highly acclaimed An American Sunrise, several plays and children's books, and two memoirs, Crazy Brave and Poet Warrior: A Call for Love and Justice, her many honors include the Ruth Lily Prize for Lifetime Achievement from the Poetry Foundation, the Academy of American Poets Wallace Stevens Award, two NEA fellowships, and a Guggenheim Fellowship. As a musician and performer, Harjo has produced six award-winning music albums including her newest, I Pray for My Enemies (Sunyata Records). She is Exec­u­tive Edi­tor of the anthol­o­gy When the Light of the World was Sub­dued, Our Songs Came Through - A Nor­ton Anthol­o­gy of Native Nations Poet­ry and the editor of Living Nations, Living Words: An Anthology of First Peoples Poetry, the companion anthology to her signature Poet Laureate project. She is a chancellor of the Academy of American Poets, Board of Directors Chair of the Native Arts & Cultures Foundation, and holds a Tulsa Artist Fellowship. She lives in Tulsa, Oklahoma.

This landmark anthology celebrates the indigenous peoples of North America, the first poets of this country, whose literary traditions stretch back centuries. Opening with a blessing from Pulitzer Prize–winner N. Scott Momaday, the book contains powerful introductions from contributing editors who represent the five geographically organized sections. Each section begins with a poem from traditional oral literatures and closes with emerging poets, ranging from Eleazar, a seventeenth-century Native student at Harvard, to Jake Skeets, a young Diné poet born in 1991, and including renowned writers such as Luci Tapahanso, Natalie Diaz, Layli Long Soldier, and Ray Young Bear. When the Light of the World Was Subdued, Our Songs Came Through offers the extraordinary sweep of Native literature, without which no study of American poetry is complete.

Joy Harjo was appointed the new United States poet laureate in June 2019, and is the first Native American Poet Laureate in the history of the position. Born in Tulsa, Oklahoma on May 9, 1951, Harjo is a member of the Mvskoke/Creek Nation and belongs to Oce Vpofv. She received a BA from the University of New Mexico before earning an MFA from the Iowa Writers Workshop in 1978.

Harjo is a poet, musician, and playwright. She is the author of several books of poetry, including An American Sunrise (W. W. Norton, 2019); The Woman Who Fell From the Sky (W. W. Norton, 1994), which received the Oklahoma Book Arts Award; and In Mad Love and War (Wesleyan University Press, 1990), which received an American Book Award and the Delmore Schwartz Memorial Award. Her memoir Crazy Brave (W. W. Norton, 2012) won the 2013 PEN Center USA literary award for creative nonfiction. Harjo has also published collections of interviews and conversations, children's books, and collaborative art texts.

In 2015 she received the Wallace Stevens Award for proven mastery in the art of poetry from the Academy of American Poets. About Harjo, Chancellor Alicia Ostiker said, "Throughout her extraordinary career as poet, storyteller, musician, memoirist, playwright and activist, Joy Harjo has worked to expand our American language, culture, and soul.  A Creek Indian and student of First Nation history, Harjo is rooted simultaneously in the natural world, in earth-especially the landscape of the American southwest-and in the spirit world. Aided by these redemptive forces of nature and spirit, incorporating native traditions of  prayer and myth into a powerfully contemporary idiom, her visionary justice-seeking art transforms personal and collective bitterness to beauty, fragmentation to wholeness, and trauma to healing."

Also a performer, Harjo plays saxophone and flutes with the Arrow Dynamics Band and solo, and previously with the band Poetic Justice. She has appeared on HBO's Def Poetry Jam in venues across the U.S. and internationally and has released four award-winning albums. In 2009, she won a Native American Music Award (NAMMY) for Best Female Artist of the Year.

In 2015, Harjo gave The Blaney Lecture on contemporary poetry and poetics, which is offered annually in New York City by a prominent poet, called "Ancestors: A Mapping of Indigenous Poetry and Poets." Her other honors include the 2019 Jackson Poetry Prize, the PEN Open Book Award, the American Indian Distinguished Achievement in the Arts Award, The Ruth Lilly Poetry Prize, the Josephine Miles Poetry Award, the Mountains and Plains Booksellers Award, the New Mexico Governor's Award for Excellence in the Arts, the William Carlos Williams Award from the Poetry Society of America, and the Lifetime Achievement Award from the Native Writers Circle of the Americas. She has also received fellowships from the Arizona Commission on the Arts, the Witter Bynner Foundation, The Guggenheim Foundation, and the National Endowment for the Arts.

In 2019, Harjo was elected a Chancellor of the Academy of American Poets. On this occasion, Academy Chancellor Marilyn Chin said "[Joy] is an iconic and beloved multi-genre artist. Her poetry, prose, and music have delighted, informed, and tantalized an international audience for over four decades. Her poetry displays a strong commitment to her social and political ideals as she fights tirelessly for Native American justice, ending violence against women, and a variety of important issues. Her masterful spiritual grace always shines through with compassion and forgiveness. Her poetry is a timeless gift to the world."

In addition to serving as U.S. Poet Laureate, Harjo directs For Girls Becoming, an arts mentorship program for young Mvskoke women, and is a founding board member of the Native Arts and Cultures Foundation. She was the guest editor for Poem-a-Day in April 2020 and lives in Tulsa, Oklahoma.

Secrets from the Center of the World (University of Arizona Press, 1989)

The Spiral of Memory: Interviews (Poets on Poetry) (University of Michigan Press, 1995)

Wings of Night Sky, Wings of Morning Light: A Play by Joy Harjo and a Circle of Responses (Wesleyan University Press, 2019)

The Blaney Lecture, 2015: Ancestors: A Mapping of Indigenous Poetry and Poets

In Memory of C. D. Wright

Ancestors: A Mapping of Indigenous Poetry and Poets

I Pray For My Enemies 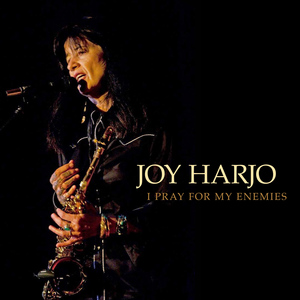 In her first new recording in a decade, Joy Harjo – the first Native American named Poet Laureate of the United States – digs deep into the indigenous red earth and the shared languages of music to sing, speak and play a stunningly original musical meditation that seeks healing for a troubled world – I Pray for My Enemies, to be released from Sunyata Records/Sony Orchard Distribution on March 5, 2021.

Collaborating with producer/engineer Barrett Martin on this unique new album, Harjo brings a fresh identity to the poetry and songs that have made her a renowned poet of the Muscogee Creek Nation and one of the most authentic and compelling voices of these times.

"The concept for I Pray for My Enemies began" says Harjo, "with an urgent need to deal with discord, opposition. It could have been on a tribal, national or a personal level. I no longer remember. The urgency had a heartbeat and in any gathering of two or more, perhaps the whole planet, our hearts lean to entrainment – that is, to beat together."

I Pray For My Enemies
https://www.joyharjo.com/