Karl Jenkins was born in the small Welsh coastal village of Penclawdd on the Gower Peninsula West of Swansea. Karl is the only child of his father David and his mother Lily, who was of Swedish extraction. His father, a school teacher, was also an organist and choirmaster of the local Tabernacle Chapel and it was he who began teaching his son the piano when Karl was six years old. During these formative years, apart from being introduced to the classical world by his father via recordings and the occasional concert, he was also, as part of chapel life, exposed to the unique sound of Welsh hymn singing,
echoes of which are to be heard
in future compositions.

On entering Gowerton Grammar School at eleven, Karl began to play the oboe and within the next few years progressed through the Glamorgan Youth Orchestra and the National Youth Orchestra of Wales, Cardiff, where he read music, taking a Bachelor of Music degree. During his school and university years he became increasingly interested in jazz (playing saxophone) which was to have a significant bearing on his compositional style in later years. After graduating, he continued post graduate studies at the Royal Academy
of Music, London.

Following his studies he won awards as a jazz oboist and multi-instrumentalist, working with, amongst others Ronnie Scott. He co-founded Nucleus in 1972, winning first prize
at the Montreux Jazz Festival, before
joining Soft Machine.

The Armed Man: A Mass for Peace 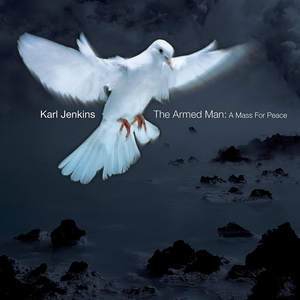 Welsh-born Karl Jenkins, who has been called: "the most popular living composer", writes music that speaks to audiences across the world. Following the huge success of:Adiemus, Jenkins brings you: The Armed Man: A Mass for Peace on EMI Classics. In a manner reminiscent of Britten's War Requiem, "The Armed Man" interpolates a number of different texts within the usual Mass form. Malory, Dryden, Swift, Tennyson, Kipling, The Koran and the Hindu Mah bhar ta contribute to a compelling account of the descent into and terrible consequences of war.

The Armed Man: A Mass for Peace
http://www.karljenkins.com/