Leonidas Kavakos is recognised across the world as a violinist and artist of rare quality, known at the highest level for his virtuosity, superb musicianship and the integrity of his playing. Born in Athens into a musical family, Kavakos's first steps as a violinist were guided by his parents. He studied at the Hellenic Conservatory with Stelios Kafantaris, one of the three important mentors in his life, together with Josef Gingold and Ferenc Rados.

With three competitions to his name before the age of 21, he won the Sibelius Competition in 1985, and the Paganini and Naumburg competitions in 1988. These successes led to his recording the original Sibelius Violin Concerto (1903/4) for the first time in history, recognised with a Gramophone Award; and to the honour of performing on the famous ‘Il Cannone' Guarneri del Gesù, which belonged to Paganini.

Kavakos's international career has allowed him to develop close relationships with the world's major orchestras and conductors, such as the Berliner Philharmoniker/Rattle, Royal Concertgebouw/Jansons, London Symphony Orchestra/Gergiev and Gewandhausorchester Leipzig/Chailly. In the 2012/13 season he had residencies with the London Symphony Orchestra and Berliner Philharmoniker, and he performed with the Concertgebouw and Mariss Jansons on its Jubilee tour, with a piece originally premiered by the orchestra, Bartók's Violin Concerto No.2. In the 2013/14 season, Kavakos makes his debut with the Vienna Philharmonic/Chailly. In the USA, he performs regularly with the New York Philharmonic, Chicago Symphony, Boston Symphony, Philadelphia Orchestra and Los Angeles Philharmonic orchestras.

In his burgeoning career as a conductor he has worked with the Deutsches Symphonie-Orchester Berlin, the Chamber Orchestra of Europe, the Accademia Nazionale di Santa Cecilia, and the Vienna Symphony, Royal Stockholm Philharmonic, Finnish Radio Symphony and Rotterdam Philharmonic orchestras. In the USA, he has conducted the Boston, Atlanta and Saint Louis symphony orchestras. This season conducting highlights include return engagements with the Boston Symphony, Budapest Festival, Gothenburg Symphony and Maggio Musicale Fiorentino orchestras, as well as important conducting debuts with the LSO and Orchestre Philharmonique de Radio France.

Since 2012, Leonidas Kavakos has been an exclusive Decca Classics recording artist. His first release on the label, the complete Beethoven Violin Sonatas with Enrico Pace, resulted in the award of ‘Instrumentalist of the Year' at the 2013 ECHO Klassik Awards. The whole Beethoven cycle with Pace is presented in the 2013/14 season at New York's Carnegie Hall, as well as in the Far East.

Kavakos's second disc with Decca Classics, released in October 2013, is of the Brahms Violin Concerto with the Gewandhausorchester Leipzig and Riccardo Chailly and a third disc, of Brahms Violin Sonatas with pianist Yuja Wang, will be released in spring 2014. During this season and next, Kavakos and Wang will give a series of Brahms recitals in major European cities.

Following the Sibelius and other early recordings for Dynamic, BIS and ECM, Kavakos recorded for Sony Classical, including live recordings of Mozart's five Violin Concertos and Symphony No.39 with Camerata Salzburg and the Mendelssohn Violin Concerto, for which, in 2009, he received an ECHO Klassik ‘Best Concerto Recording' award.

For the past two years Kavakos has curated an annual violin and chamber-music masterclass in Athens, attracting violinists and ensembles from all over the world and reflecting his deep commitment to the handing on of musical knowledge and traditions.

Leonidas Kavakos is passionate about the art of violin and bow making, both in the past and now, in the present. Kavakos considers instrument making to be a great mystery and, to our day, an undisclosed secret. He plays the "Abergavenny" Stradivarius violin of 1724 and owns modern violins made by F. Leonhard, S.P. Greiner, E. Haahti and D. Bague. Bows by F.X. Tourte, D. Peccatte, J.P.M. Persois and J. Henry are his most precious companions.

Twenty-seven year old pianist Yuja Wang is widely recognized as one of the most important artists of her generation.  Regularly lauded for her controlled, prodigious technique, Yuja has been praised for her authority over the most complex technical demands of the repertoire, the depth of her musical insight, as well as her fresh interpretations and charismatic stage presence.

Yuja is an exclusive recording artist for Deutsche Grammophon. Following her debut recording, Sonatas & Etudes, Gramophone magazine named Yuja the Classic FM 2009 Young Artist of the Year. For her second recording, Transformation, Yuja received an Echo Klassik award as "Young Artist of the Year".  Yuja next collaborated with Maestro Claudio Abbado and the Mahler Chamber Orchestra to record her first concerto album featuring Rachmaninoff's Rhapsody on a Theme of Paganini and his Concerto No. 2 in C minor which was nominated for a Grammy as "Best Classical Instrumental Solo."  This was followed by, Fantasia, a collection of encore pieces by Albéniz, Bach, Chopin, Rachmaninov, Saint-Saëns, Scriabin and others.

In the years since her 2005 debut with the National Arts Center Orchestra led by Pinchas Zukerman, Yuja has already performed with many of the world's most prestigious orchestras including those of Boston, Chicago, Cleveland, Los Angeles, New York, Philadelphia, San Francisco and Washington, in the U.S., and abroad with the Berlin Staatskapelle, China Philharmonic, Filarmonica della Scala, Israel Philharmonic, London Philharmonic, Orchestre de Paris, Orquesta Nacional España, Simón Bolívar Symphony Orchestra, the NHK Symphony in Tokyo, Royal Concertgebouw Orchestra, Orchestra Mozart and Santa Cecilia, among others.

In 2006 Yuja made her New York Philharmonic debut at the Bravo! Vail Music Festival and performed with the orchestra the following season under Lorin Maazel during the Philharmonic's Japan/Korea visit.  In 2008 she toured the United States with the Academy of St. Martin in the Fields led by Sir Neville Marriner, and in 2009 Yuja performed as soloist with the You Tube Symphony Orchestra led by Michael Tilson Thomas at Carnegie Hall.  That summer Yuja joined Abbado at the Lucerne Music Festival performing and recording Prokofiev's Piano Concerto No. 3, and went on to perform with the Lucerne Festival Orchestra and Abbado on tour in China.

Yuja regularly gives recitals in major cities throughout Asia, Europe and North America.  She is a dedicated performer of chamber music appearing at summer festivals throughout the world including annual appearances at Switzerland's Verbier Festival.  In March 2011 Yuja performed in a three-concert chamber series at the Salle Pleyel in Paris with principal players from the Berlin Philharmonic.  She made her Carnegie Hall recital debut at Stern Hall in October 2011.

Last year Yuja returned to the Israel Philharmonic to work with Zubin Mehta, followed by a tour of the U.S. that included performances at Carnegie and Disney halls.  She then launched into a three-week tour of Asia with the San Francisco Symphony and Tilson Thomas, traveling to Macau, China, Hong Kong, Taiwan and Japan.  Yuja again joined the Berlin Philharmonic's principal players, this time with a series of all-Brahms concerts at Salle Pleyel in Paris.  In spring 2013 she was presented by the Berlin Philharmonic in recital at the Philharmonie, and returned to Carnegie Hall in both recital and a concerto appearance with the San Francisco Symphony.  Her season included a recital tour of Japan where she made her Suntory Hall debut.

This season the London Symphony Orchestra have invited Yuja as their featured artist in the LSO Artist Portrait series for 2014 which includes performing three concertos, a recital and chamber music in London, followed by a tour of China with Daniel Harding conducting.  She makes her debut with the Hungarian National Philharmonic conducted by Zoltan Kocsis performing Bartok's Piano Concerto No. 2.  Yuja's frequent summer collaborations with violinist Leonidas Kavakos are extended further as they will undertake multiple tours of Europe focusing on the great violin and piano sonatas of Brahms.  She returns to the Los Angeles Philharmonic for subscription concerts and on tour in the U.S. with Dudamel conducting.  Yuja also returns to the Boston Symphony, Sir Andrew Davis conducting, and the Cleveland Orchestra, Giancarlo Guerrero conducting.

At a young age Yuja entered the Central Conservatory of Music in Beijing to study under Ling Yuan and Zhou Guangren.  From 1999 to 2001 she participated in the Morningside Music summer program at Calgary's Mount Royal College, an artistic and cultural exchange program between Canada and China, and began studying with Hung-Kuan Chen and Tema Blackstone at the Mount Royal College Conservatory. Yuja then moved to the U.S. to study with Gary Graffman at The Curtis Institute of Music in Philadelphia, where she graduated in 2008. In 2006 she received the Gilmore Young Artist Award, and in 2010 was awarded the prestigious Avery Fisher Career Grant.  Yuja is a Steinway Artist. 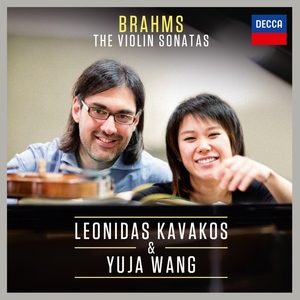 After their much talked about partnership at the 2013 Verbier Festival in Switzerland, praised violinist Leonidas Kavakos and star pianist Yuja Wang team up once again for the Decca/Universal Music Classics release, Brahms: The Violin Sonatas. Kavakos' third recording for Decca follows his GRAMMY Nominated complete Beethoven sonatas and includes the three violin sonatas which were written for Brahms' muse, Joseph Joachim, who premiered the Violin Concerto and contributed its cadenzas. Added as a bonus track, the F-A-E Scherzo which Brahms contributed to a composite sonata with Schumann and Dietrich, is also included on the album.