The Song Of the Earth - Mahler, Ye Xiaogang 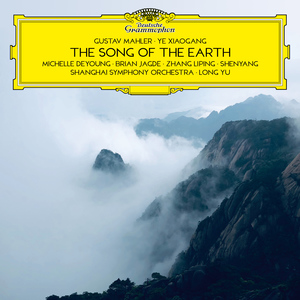 Recording sets Mahler's Das Lied von der Erde in conversation with Xiaogang Ye's
The Song of the Earth, both setting the same texts by poets of China's Tang dynasty

"Our countries have moved further apart. Most people are so immersed in their own life experience, not trying to understand the culture of other societies … but by comparing these two works people can see the double picture – how Europeans feel about love, pleasure, and death, and how the Chinese feel about the same things."  Long Yu

Centuries-old Chinese poetry is brought vividly to life in a new recording from Long Yu and the Shanghai Symphony Orchestra. Their second album for Deutsche Grammophon, The Song of the Earth, is set for international release on 09 July 2021. Recorded in Shanghai with soloists Michelle DeYoung, Brian Jagde, Liping Zhang and Shenyang, it pairs Gustav Mahler's symphonic song-cycle Das Lied von der Erde ("The Song of the Earth"), based on German translations of seven ancient Chinese poems, with the world premiere recording of Xiaogang Ye's settings of the same texts in the original Mandarin.

Long Yu is passionate both about breaking down barriers between different cultures and about promoting new music by contemporary composers from China and across the world. He has brought international orchestras and a wide range of western classical music to China, toured the West with Chinese orchestras, and commissioned dozens of works from composers as varied as Qigang Chen, Tan Dun, Philip Glass and Krzysztof Penderecki.

The conductor spent a decade in Germany at the start of his career and has always felt an affinity with the music of Mahler. Recognising the contemporary resonance of the texts sung in Das Lied von der Erde, he decided some years ago to invite Xiaogang Ye, one of China's leading composers (b. 1955), to write a modern companion piece that would capture the nuances of the original poems from a 21st-century Chinese perspective. Ye too has a foot in two worlds, having studied composition at Beijing's Central Conservatory of Music and at the Eastman School of Music in Rochester, New York, and much of his output is influenced by or contains ancient Chinese texts.

A masterpiece that emerged from the shadow of personal tragedy, Das Lied von der Erdeprobes the emotions arising from life's pleasures, hopes and fears, and from an awareness of its fragility. After suffering the death of his eldest daughter and being forced to resign as Director of Vienna's Court Opera following a politically motivated, anti-Semitic campaign against him, Mahler was diagnosed with the heart problem that was to shorten his life.

He found solace in Die chinesische Flöte (The Chinese Flute), Hans Bethge's free translation of a French-language edition of verse written during China's Tang dynasty (618-907 CE). Mahler chose seven of these poems to set for two soloists and orchestra, his music covering every mood from drunken hedonism to a calm acceptance of death in the knowledge that nature will continue to renew itself.

Xiaogang Ye's familiarity with the Chinese language led him to rearrange the order of the texts and compose the more optimistic response heard in The Song of the Earth, written in 2005, almost a century after the Mahler. "In my opinion," he says, "Mahler's music is full of disillusionment, but my work expresses a middle-aged man remaining ambitious about the world." And, as Long Yu notes, Ye's conclusion echoes the mood of the close of Das Lied von der Erde: "You can hear that the last piece of the Mahler, ‘Der Abschied' and the last piece in the Chinese work both purvey exactly the same emotion."

Mezzo Michelle DeYoung and tenor Brian Jagde respond to the many and varied vocal demands of the Mahler with assured artistry and understanding of the work's psychological depth, while soprano Liping Zhang and baritone Shenyang likewise prove themselves equal to the challenges of the Ye which, as The Guardian noted after its UK premiere, employs "vocal techniques that swing seamlessly from the sustained notes of western Lieder to the controlled swoops of Chinese opera". The Shanghai Symphony Orchestra, under the baton of Long Yu, provide virtuoso playing in both works, bringing out every detail in crystalline clarity. Ye's orchestration is particularly diverse and includes a large array of percussion, traditional Chinese instruments among them, as well as conventional western orchestral instruments.

"For many years I have dreamed of presenting Mahler's masterwork together with settings in the original Chinese that convey what their emotions mean to a native speaker," concludes Long Yu. "Xiaogang Ye understood this idea and has composed an exquisite counterpart to Das Lied von der Erde. Although we live today in a world that has never been more connected, we see widening divisions and growing conflict between countries. The different ways in which Mahler and Ye approach the same emotions have much to tell us about our shared human experience and about the importance of seeing the world from the other's perspective. I was delighted when Deutsche Grammophon agreed to record both works."