Louise Bessette has been renowned over her 35 year career for the excellence of her performances and for her commitment to promoting contemporary music. Numerous organizations and international competitions have seen fit to reward her talent, and her reviews are constantly laudatory. She has recorded a wide variety of repertoire both as a soloist and with chamber ensembles, appearing the world over with distinguished orchestras and by invitation to many first-rate festivals. Many composers write especially for her. Beyond her exceptional performance career, Mrs. Bessette is a significant figure in the musical world, promoting contemporary music every chance she gets, and creating the opportunity for composers to showcase their talents alongside performers, in activities and collaborations that essentially enrich our cultural panorama.

Louise Bessette's musical career is a great arc, consistently demonstrating her deep engagement with the music of her time. She dedicated the year 2008 to the centenary of the birth of Olivier Messiaen. Her efforts and enthusiasm led to the organization of "Automne Messiaen", which featured more than 50 performers, ensembles and organizations celebrating Messiaen in Montreal. The Orchestre symphonique de Montréal and his Music Director Maestro Kent Nagano gave a stunning performance of the opera Saint-François d'Assisewhich received the Grand Prix 2008 from the Conseil des Arts de Montréal.  Mrs. Bessette shone as a soloist of Messiaen's oeuvre over the course of wide-ranging concerts that brought together seasoned performers, including the SMCQ Ensemble, conducted by Walter Boudreau (Des canyons aux étoiles), l'Orchestre du Conservatoire de musique de Montréal, lead by Raffi Armenian and Louis Lavigueur (Sept Haïkaï, Trois petites liturgies de la présence divine), l'Ensemble Musique Avenir, led by Véronique Lacroix (Oiseaux exotiques), and an evening of poetry and music with the poet and narrator Pierre Morency. In order to perform the Quatuor pour la fin du temps, a seminal piece in Olivier Messiaen's oeuvre, Louise Bessette formed the Ensemble ARTefact with Simon Aldrich (clarinet), Yegor Dyachkov (cello) and Jonathan Crow (violin). This collaboration led her to launch the idea of an homage to the great French composer by commissioning the talented Canadian composer, Nicolas Gilbert, to write a piece for the same group of instruments. This resulted in the quartet "Le temps des impossibles", which was made possible thanks to a grant from the Canada Council for the Arts. Then, on the 10 of December, 2008, the date of Messiaen's centenary, Louise Bessette performed the complete Vingt Regards sur l'Enfant-Jésus at the Chapelle historique du Bon-Pasteur in Montreal. This concert was greeted enthusiastically by the critic Christophe Huss, who rated it among the 10 best concerts of the year: "What started out a celebration became a ceremonial [...] the architectural grasp [...] mastery of time [...] primacy of form and content [...] Louise Bessette's Messiaen is as powerful as Kent Nagano's [... ]" (Le Devoir, December 11, 2008).

Louise Bessette officially celebrated her 30 year musical career on March 31, 2012, at the Chapelle historique du Bon-Pasteur in Montreal. This huge event was part of the 2011-2012 season of the SMCQ, and it consisted in a triple recital by the pianist. A solo and chamber music concert including four world premieres by Canadian composers Serge Arcuri, Michel Boivin, Michael Oesterle and Ana Sokolovic; a solo recital where we heard the pianist performing two major works from the twentieth century, the Suite no. 9 "Ttai" by Giacinto Scelsi and Les Planètes, a phenomenal work by Canadian composer Walter Boudreau;  at the ending of this fantastic musical day, British pianist Peter Hill joined Louise Bessette in a stunning program: The rite of spring by Stravinsky (celebrating the centenary of this historical work) and the Visions de l'Amen by Olivier Messiaen.

As a pianist with an eclectic repertoire, and always eager to promote exchange with other art forms, Louise Bessette recorded the works of Charles-Valentin Alkan and Grieg for a film soundtrack in March 2009. "Hidden diary", by the French film director Julie Lopes-Curval and starring Catherine Deneuve and Marie-Josée Croze, was presented as world premiere at the Festival des Films du Monde in Montreal (2009), and then in movie theatres all over the world.

Louise Bessette has received unreserved acclaim from critics: "Messiaen has found in Louise Bessette his most inspired modern-day interpreter, undoubtedly for many years to come (Yves Allaz, Journal de Genève). "Her program was striking [...] the sight of the captivatingly elegant Louise Bessette rampaging happily through Cowell's Exultation and Tiger was nothing if not appealing, and she responded to the glittering splendours of Olivier Messiaen's Vingt Regards sur l'Enfant-Jésus with playing of genuine grandeur. All this was delivered faultlessly from memory and with astonishing reserves of controlled, relaxed virtuosity." Malcolm Hayes, The Musical Times, London).

Always working to encourage the growth of music, Louise Bessette has participated in numerous juries for international competitions, and has given master classes in Europe as well as in Canada an Asia. She has been Professor of Piano at the Montreal Conservatory since 1996, where she was head of the keyboard department from 2005 to 2007.

During the 2013-2014 season, Louise Bessette undertook a daunting project. To celebrate the 25th musical season of the beloved cradle of so much of Montreal's innovative music, La Chapelle historique du Bon-Pasteur (Montreal), she offered a series of four piano recitals : 25 ans de musique québécoise avec Louise Bessette, to create an impressive overview of music from the period of La Chapelle's existence, 1988 to 2014. On the website Montrealistement, Normand Babin's review emphasized the enormity of this event which included 25 works by 25 different Quebec composers, one for each year, including a world premiere for 2014 : La femme forte ; Louise Bessette, la voix des compositeurs québécois ; 25 oeuvres, 25 compositeurs, 25 ans...UNE seule pianiste. This spectacular event has implanted itself as a milestone in Quebec's musical history.

Prizes and honours have accompanied Louise Bessette throughout her career. She took top honours in the Eckhardt-Gramatté Canadian Music Competition (1981), First Prize at the Concours International de Musique Contemporaine in Saint-Germain-en-Laye, France (1986), both the First Prize and the Special Prize for Piano at the Rotterdam 1989 International Gaudeamus Competition for Contemporary Music, and the 1991 Flandre-Québec Award in recognition of her contribution to contemporary music. The Conseil Québécois de la Musique awarded her the Opus Prize 1996-1997 in the "conductor or soloist of the year" category, for her recital of Messiaen's Vingt Regards sur l'Enfant-Jésus. In January 2010, she received two Opus Prizes : "Performer of the year", and "Musical event of the year" for Automne Messiaen 2008, and in January 2012, the Opus Prize "Record of the Year - Modern and Contemporary Music" for the CD Serge Arcuri - Migrations (ATMA Classique). In 2013, she won the Opus Prizes "Concert of the Year - Montreal" and "Concert of the Year - Modern and Contemporary Music" for the event Louise Bessette, 30 ans de carrière. In January 2015, Louise Bessette was listed as one of Canada's top 25 pianists by CBC Music. She also received, in 2015, the Opus Prize "Performer of the Year" for the concert series 25 ans de musique québécoise avec Louise Bessette. In February 2016, Louise Bessette received her eighth Opus Prize with the Molinari Quartet in the category "Record of the Year, Modern and Contemporary Music" for Sofia Gubaidulina - Chamber Music (ATMA Classique). The Montréal daily La Presse named Mrs. Bessette "Personality of the Week" in 1986, while in 1989 the Salon de la Femme de Montréal named her "Woman of the Year" in the Arts category. In October 2001, she was received as a Member of the Order of Canada and appointed, in June 2005, Officier of the Ordre national du Québec. In November 2009, she was named Ambassador of Canadian Music by the Canadian Music Centre. 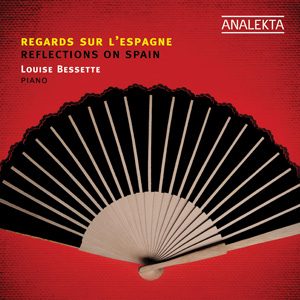 An exhilarating and elegant concert pianist, Louise Bessette stands out as one of the preeminent performers of music from our times. After having devoted her previous recording to Oliver Messiaen pianist Louise Bessette takes on a totally different musical journey, with a program of Spanish works. Reflections on Spain. Spain: 16th-century superpower, cradle of flamenco, and birthplace of numerous painters and architects. But is it possible to capture the true essence of Spain, which still inspires Hispanic and foreign composers alike' Can one extract a particular sound or colour from its 17 autonomous communities, 50 provinces and 8,112 municipalities' Should one even try' In the preface to his 20 Cantos populares espaoles, Joaquýn Nin himself compared Spain's then 47 provinces to a 47-note scale that possessed the power to express every shade of joy, sadness, love and hope.