London With A Twist - Live at Bernie's 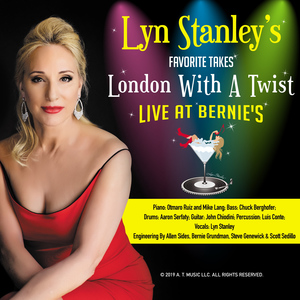 Lyn Stanley has had a remarkable career in music. With the late legendary jazz pianist Paul T. Smith as her mentor, she began her career out of nowhere in 2010. Her debut recording Lost In Romance ranked in the top 100 albums played by American radio stations and, virtually by herself, she has built up a large worldwide following (particularly among audiophiles) and released such popular albums as Potions {from the 50s}, Interludes, The Moonlight Sessions Volumes One and Two, and London Calling-A Toast To Julie London, all of which have been big sellers. She was awarded Female Jazz Vocalist of the Year for 2018 by Saul Levine, programmer for KKJZ-FM,Los Angeles' top jazz radio station. Her secret, beyond her unique sultry voice and her impeccable taste in picking out gems from the Great American Songbook, has been her planning and attention to details. Whether it is the packaging, the sound quality, the material, the arrangements, the always-danceable tempos, the top-notch musicians or the producer, Lyn always goes first class.

Following up on the success of her London Calling-A Toast To Julie London, Lyn Stanley decided to take a chance and record London With A Twist-Live At Bernie's as a direct-to-disc album. Direct-to-disc recording is a process that bypasses the use of magnetic tape, recording audio directly onto an analog disc. The sound quality is impeccable but it can be a very difficult process requiring nerves of steel. There is no opportunity to "fix" mistakes later on, to change the balance, use overdubbing, or to do any editing. The music is recorded live, one song after another. If a mistake is made, either the entire process stops or the musicians continue playing. While all recordings prior to the Lp's debut in 1949 were direct-to-disc, since 78s contained around three minutes of music, stopping and doing a second take was easy. When Lps, which held 15-20 minutes of music, took over, most recordings were made utilizing magnetic tape and engineers could repair any mishaps. In the 1970s and ‘80s a handful of direct-to-disc albums were made for the audiophile market who wanted much better sound quality. While some of those projects were successful, because the musicians had to play nonstop until a side of an Lp was filled, much of the time they played it safe to avoid last-minute mistakes. On London With A Twist, the exact opposite occurs. Utilizing her Jazz Mavericks, an all- star group consisting of guitarist John Chiodini, either Otmaro Ruiz or Mike Lang on piano, bassist Chuck Berghofer, drummer Aaron Serfaty, and percussionist Luis Conte, Lyn Stanley sounds relaxed and swinging in this collection of her favorites takes from two during the live recording sessions. The singer has found that the most rewarding performances occur when she and her musicians create music spontaneously, using only chord charts. That way all of the players own the music and the results are creative, looser and joyful, sounding like a late-night set performed purely for the fun of it. And with this release, Lyn Stanley has become one of only five singers who have created a direct-to-disc vocal album containing at least three songs and 12 minutes of music; London With A Twist has over 43 minutes and was recorded at Bernie Grundman's Mastering Studio using his famous customized lathe. Recording/instant mixing by engineer Allen Sides.

Among the dozen selections on London With A Twist are such standards as "Route 66," "Blue Moon," ‘Goody Goody," ‘Bye Bye Blackbird" and "Body And Soul." Adding variety are two offbeat choices, Chuck Berry's "You Never Can Tell" and Bruce Springsteen's "Pink Cadillac," that one could imagine Julie London interpreting in a similar fashion. Lyn Stanley's interpretations of these classic songs do justice to the melodies and the lyrics. She and her Jazz Mavericks create fearless performances during a swinging set that audiophiles and lovers of high-quality music will treasure.

The sultry swing singer Lyn Stanley releases her most adventurous project, a Direct To Disc Live to Metal Lacquer Recording with superb recording quality that was performed live with instantaneous mixing and no editing.