Joining a rare natural warmth with a fierce commitment to the transforming communicative power of music, Dawn Upshaw has achieved worldwide celebrity as a singer of opera and concert repertoire ranging from the sacred works of Bach to the freshest sounds of today.  Her ability to reach to the heart of music and text has earned her both the devotion of an exceptionally diverse audience, and the awards and distinctions accorded to only the most distinguished of artists.  In 2007, she was named a Fellow of the MacArthur Foundation, the first vocal artist to be awarded the five-year "genius" prize, and in 2008 she was named a Fellow of the American Academy of Arts & Sciences.

Her acclaimed performances on the opera stage comprise the great Mozart roles (Pamina, Ilia, Susanna, Despina) as well as modern works by Stravinsky, Poulenc, and Messiaen.  From Salzburg, Paris and Glyndebourne to the Metropolitan Opera, where she began her career in 1984 and has since made nearly 300 appearances, Dawn Upshaw has also championed numerous new works created for her includingThe Great Gatsby by John Harbison; the Grawemeyer Award-winning opera, L'Amour de Loin and oratorioLa Passion de Simone by Kaija Saariaho; John Adams's Nativity oratorio El Niño;
and Osvaldo Golijov's chamber opera Ainadamar and song cycle Ayre.

Ms. Upshaw's 2012-13 season features an array of performances in many areas of the repertoire that she has championed. With the St. Paul Chamber Orchestra, where she is an Artistic Partner, Ms. Upshaw reprises jazz composer Maria Schneider's Carlos Drummond de Andrade Stories and sings music of Bach, Handel, and Crumb, as well as the world premiere of a new work written for her by Shawn Jaeger. She recreates the role of Simone Weil in La Passion de Simone with Esa-Pekka Salonen and the Finnish Radio, appears with the Boston Symphony Orchestra in Sibelius's Luonnotar, under the baton of Thomas Adès, and sings music of Debussy with the London Symphony, conducted by John Adams. A dedicated recitalist, she appears with pianist Stephen Prutsman at the University of Texas at Austin, and embarks on a tour of Hawaii with longtime collaborator Gilbert Kalish. She also performs with The Knights Chamber Orchestra at the Ravinia Festival, and with the Crash Ensemble at the Kennedy Center and at Carnegie Hall in music written for her by Irish composer Donnacha Dennehy.

It says much about Dawn Upshaw's sensibilities as an artist and colleague that she is a favored partner of many leading musicians, including Richard Goode, the Kronos Quartet, James Levine, and Esa-Pekka Salonen. In her work as a recitalist, and particularly in her work with composers, Dawn Upshaw has become a generative force in concert music, having premiered more than 25 works in the past decade. From Carnegie Hall to large and small venues throughout the world she regularly presents specially designed programs composed of lieder, unusual contemporary works in many languages, and folk and popular music.  She furthers this work in master classes and workshops with young singers at major music festivals, conservatories, and liberal arts colleges. She is Artistic Director of the Vocal Arts Program at the Bard College Conservatory of Music, and a faculty member of the Tanglewood Music Center.

A four-time Grammy Award winner, Dawn Upshaw is featured on more than 50 recordings, including the million-selling Symphony No. 3 by Henryk Gorecki. Her discography also includes full-length opera recordings of Mozart's Le nozze di Figaro; Messiaen's St. Francois d'Assise; Stravinsky's The Rake's Progress; John Adams's El Niño; two volumes of Canteloube's "Songs of the Auvergne," and a dozen recital recordings. Her most recent release on Deutsche Grammophon is "Three Songs for Soprano and Orchestra", the third in a series of acclaimed recordings
of Osvaldo Golijov's music.

Dawn Upshaw holds honorary doctorate degrees from Yale, the Manhattan School of Music, Allegheny College, and Illinois Wesleyan University. She began her career as a 1984 winner of the Young Concert Artists Auditions and the 1985 Walter W. Naumburg Competition, and was a member of the Metropolitan Opera Young Artists Development Program. Ms. Upshaw has recorded extensively for the Nonesuch label. She may also be heard on Angel/EMI, BMG, Deutsche Grammophon, London, Sony Classical, Telarc, and on Erato and Teldec in the Warner Classics Family of labels. She appears by arrangement with IMG Artists.

Maria Schneider's music has been hailed by critics as "evocative, majestic, magical, heart-stoppingly gorgeous, and beyond categorization." She and her orchestra became widely known starting in 1994 when they released their first recording, 'Evanescence.' With that recording, Schneider began to develop her personal way of writing for her 17-member collective, made up of many of the finest musicians in jazz today, tailoring her compositions to distinctly highlight the uniquely creative voices of the group. Subsequently, the Maria Schneider Orchestra has performed at festivals and concert halls worldwide. She herself has received numerous commissions and guest conducting invites, working with over 85 groups from over 30 countries spanning Europe, South America, Australia, Asia and North America.

Schneider's music blurs the lines between genres and she is on a very short list of those who have received GRAMMY Awards in both "jazz" and "classical". Her long list of commissioners are quite varied and range from the Carnegie Hall Jazz Orchestra, to Peter Sellars' New Crowned Hope Festival (Vienna's Mozart Festival), Jazz at Lincoln Center, Los Angeles Philharmonic Association, The American Dance Festival, Kronos Quartet, The Metropole Orchestra, the Danish Radio Orchestra, The Saint Paul Chamber Orchestra and most recently, the Ojai Festival, the Australian Chamber Orchestra and Cal Performances ('Winter Morning Walks'), featuring soprano, Dawn Upshaw, and three musicians long associated with Schneider: pianist, Frank Kimbrough, bassist, Jay Anderson, and multi-instrumentalist, Scott Robinson.

Schneider's latest fan-funded recording with Dawn Upshaw ('Winter Morning Walks') earned three 2014 GRAMMY Awards: Best Contemporary Classical Composition ('Winter Morning Walks'), Best Classical Vocal Performance (Dawn Upshaw), and Best Engineered Recording/Classical (David Frost, Brian Losch, Tim Martyn).  Schneider and her orchestra have a distinguished recording career with nine more GRAMMY nominations and two more GRAMMY awards. Unique funding of projects has become a hallmark for Schneider through the trend-setting company, ArtistShare®. For these projects, she documents her creative process for participating fans, who "fan-fund" her recordings through pre-orders. She's now composed four works for her own orchestra with the participation of commissioners coming directly from her ArtistShare® website fan base. Her album, 'Concert in the Garden'  (2004) became historic as the first recording to win a GRAMMY with Internet-only sales. Even more significantly, it blazed the "fan-funding" trail as ArtistShare's® first release. In 2012, her alma mater, the University of Minnesota, awarded Schneider an honorary doctorate.

"Maria Schneider's orchestral jazz is about feeling. Like Wayne Shorter, she somehow expresses compassion through tones." –THE NEW YORK TIMES

"To call Schneider the most important woman in jazz is missing the point … She is a major composer–period." –TIME MAGAZINE 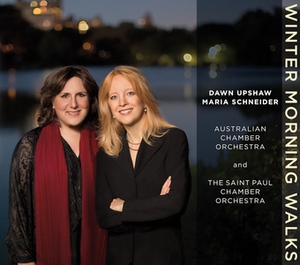