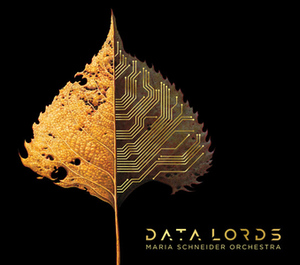 Data Lords is a new double-album by Grammy Award-winning composer and bandleader Maria Schneider. Inspired by conflicting relationships between the digital and natural worlds, the recording features Schneider's acclaimed orchestra of 18 world-class musicians.

"No one can deny the great impact that the data-hungry digital world has had on our lives. As big data companies clamor for our attention, I know that I'm not alone in struggling to find space – to keep connected with my inner world, the natural world, and just the simpler things in life," says Schneider. "Just as I feel myself ping ponging between a digital world and the real world, the same dichotomy is showing up in my music. In order to truly represent my creative output from the last few years, it felt natural to make a two- album release reflecting these two polar extremes."

The music on the first CD has at its core, electric guitar (played by Ben Monder). The title track "Data Lords" was the first to be written and was commissioned by the Library of Congress Da Capo Fund, with support from the Reva and David Logan Foundation. Four more titles – "A World Lost," "Don't Be Evil," "CQ CQ, Is Anybody There?" and "Sputnik" – complete the first volume, all of which evoke different aspects of our world under the control of the data lords.

"A World Lost" longs for a simpler time when we were all more connected to the earth and each other. Its mournful sound comes through the dark tones of Ben Monder (guitar) and Rich Perry (tenor). "Don't Be Evil" was commissioned directly through ArtistShare by David & Ginger Komar and was premiered at the Newport Jazz Festival on August 6th, 2017. This piece musically mocks Google for their absurd inspirational motto, where from the beginning, they set their ethical standards at rock bottom. Powerful solos are delivered by Jay Anderson (bass), Ben Monder (guitar), Ryan Keberle (trombone), and Frank Kimbrough (piano).

"CQ CQ, Is Anybody There?" looks back at ham radio and Morse code (the first electronic binary language) used to communicate around the world. Schneider points out that ham radio, unlike the internet, includes accountability, a code of ethics and no commercialism. All of Schneider's rhythms in this piece spell out Morse code messages like power, greed, SOS and CQ (is anybody there). Donny McCaslin's tenor rises out of a world of Morse/ham chatter as a human voice looking for connection, but what he encounters is artificial intelligence in the form of Greg Gisbert's electrified trumpet.

"Sputnik" evokes the feeling of outer space and our thousands of satellites orbiting the earth now launched by corporations in a new kind of space race. In "Sputnik" Schneider imagines a massive digital exoskeleton orbiting the earth. Its short theme rises up in variation, evoking everything from the quiet cosmos to something almost Wagnerian in power, and throughout Scott Robinson's baritone evokes his vision of space."Data Lords" looks at the moment of singularity where artificial intelligence becomes more intelligent than humans. This intense and powerful piece follows Stephen Hawking's dark prediction of AI choosing to turn on us and destroy us. Soloists are Mike Rodriguez (electrified trumpet) and Dave Pietro (alto).

Schneider writes, "I can't imagine I'm alone in often feeling desperate to get away from every device bombarding me with endless chatter, endless things – endless demands. Shutting it all down and encountering space and silence, I easily find myself again drawn to nature, people, silence, books, poetry, art, the earth and sky. From those encounters came all of the inspirations below.

"Sanzenin" is inspired by magical and meditative temple gardens, hundreds of years old, north of Kyoto, Japan. In this piece, Gary Versace (accordion) wanders through these playful gardens. "Stone Song" makes musical use of ceramicist Jack Troy's whimsical ishi no sasayaki (secret voice in the stone) pottery to imagine the world of a little stone waiting to be bumped, kicked or rolled, only to wait years or centuries to be moved again. Utilizing the most space of any piece probably ever written by Schneider, "Stone Song" showcases the brilliant art of listening in this great orchestra. Steve Wilson is featured on soprano with masterful collaboration by Gary Versace (accordion), Frank Kimbrough (piano), Jay Anderson (bass), and Johnathan Blake (drums). "Look Up" show off the facility and brilliance of Marshall Gilkes on trombone in the form of a piece that harmonically feels as if it's rising. It reminds us to turn our gaze to the sky, the world and each other. "Braided Together" featuring Dave Pietro (alto), is filled with space, and simplicity and is based on poetry by Ted Kooser. "Bluebird" was co-commissioned by The Hopkins Center, Dartmouth College, The Flynn Center for the Performing Arts, and The Center for Performing Arts at Penn State University for its premiere in April 2016. It is named after one of Schneider's favorite birds, and the piece soars through many keys and moods and features distinctly contrasting solos by Steve Wilson (alto) and Gary Versace (accordion). "The Sun Waited for Me," is chorale-like and features Donny McCaslin on tenor, with its lyrical melody played by Marshall Gilkes on trombone. Based on another Kooser poem, the piece reminds us that each day there is an expansive world awaiting our attention if we stop and invite it into our lives.

Data Lords is being made, funded and documented through ArtistShare, the world's first crowd-funding internet platform, which Schneider first used in 2003. This is her fifth ArtistShare album. Since the making of her last album, The Thompson Fields, Schneider has worked with David Bowie on a collaboration titled "Sue (Or In a Season of Crime)," and in 2019 was named an NEA Jazz Master, the nation's highest honor in jazz. In 2020, her album, Concert in the Garden, was put in the National Recording Registry, and Schneider was also elected into the prestigious American Academy of Arts and Sciences.

In recent years, Schneider has been increasingly outspoken about Google and big data companies, writing articles and white papers, appearing on Copyright Office roundtables and testifying before Congress. "Musicians have been the canary in the coal mine," Schneider says. "We were the first to be used and traded for data."