Daniel Barenboim was born in Buenos Aires on November 15, 1942, into a family of Ukrainian Jewish descent. Daniel's mother was his first piano teacher; he later studied with his father, Enrique Barenboim, who was an eminent music professor. After playing for the noted violinist Adolph Busch, who was impressed by his talent, Daniel made his debut recital at the age of seven. In 1951, he played at the Mozarteum in Salzburg and observed Igor Markevitch's conducting class. The family moved to Israel in 1952; two years later, Daniel went back to Salzburg for a conducting course with Markevitch, piano studies with Edwin Fischer, and chamber music performance with Enrico Mainardi. In the same year, he enrolled in the Accademia di Santa Cecilia in Rome, becoming, in 1956, one of the Academy's youngest graduates. He studied conducting with Carlo Zecchi at the Accademia Musicale Chigiana in Siena, also attending Nadia Boulanger's music theory and composition class at Fontainebleau. After recitals in Paris in 1955, he made his London debut in 1956, playing a recital in Festival Hall as part of the Mozart bicentennial celebrations. His U.S. debut was at New York's Carnegie Hall on January 20, 1957, in Prokofiev's Piano Concerto No. 1, with Leopold Stokowski conducting the Symphony of the Air. Later that year, he made his conducting debut in Haifa, Israel. His first North American recital was on January 17, 1958, in New York. Barenboim played his first cycle of the complete 32 piano sonatas of Beethoven in Tel Aviv in 1960 and then in New York. As a frequent conductor of the English Chamber Orchestra from 1964, he often appeared as soloist-conductor in concertos, touring with the ECO in Latin America and the Far East. Debuts with leading orchestras included the London Symphony Orchestra (New York, 1968), Berlin Philharmonic (1969), and New York Philharmonic (1970). Since then he has guest conducted virtually all of the world's leading orchestras. He led London's South Bank Summer Music Festival from 1968 to 1970. His first appearance conducting opera was at the Edinburgh Festival in 1973; his debut opera was Don Giovanni.

In 1967, Barenboim married the brilliant cellist Jacqueline Du Pré, with whom he made several exceptional recital recordings. The couple also participated in a number of excellent concert and documentary films for television directed by Christopher Nupen. Unfortunately, this partnership ended when Du Pré contracted multiple sclerosis, which forced her to end her playing career in 1972. She died in 1987.

Barenboim became music director of the Orchestre de Paris in 1975. In 1988, the French Minister of Culture announced Barenboim's appointment as artistic director of the new Bastille Opéra in Paris. Sadly, following political squabbles, which included disputes over money and artistic policy, a new Minister of Culture dismissed Barenboim in January 1989. However, that same month he was named as Sir George Solti's successor as music director of the Chicago Symphony Orchestra. In 1992, Barenboim became music director of the Berlin State Opera, then named chief conductor for life by its orchestra in 2002. He has also received awards for his efforts to bring together and mentor young Israeli and Palestinian musicians. In 1999, with Palestinian-American scholar Edward Said, Barenboim co-founded the West-Eastern Divan Orchestra, a summer youth orchestra designed to foster understanding and cooperation. In May, 2011, he conducted the ad hoc Orchestra for Gaza, under the auspices of the United Nations.

Barenboim has a rich recorded repertoire as a conductor, pianist, accompanist, and chamber music player. Interestingly, as a pianist, he tends to focus on Mozart, Beethoven, and the early Romantics, while as a conductor he favors later Romantic music, particularly Brahms and Bruckner (he has won a medal from the Bruckner Society of America). With German baritone Dietrich Fischer-Dieskau he has played acclaimed recitals of lieder, notably those of Hugo Wolf. In 2004 he resigned his position in Chicago, citing stress brought on by the numerous nonmusical activities conductors of American orchestras are expected to undertake. 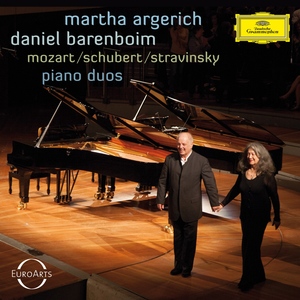 Reuniting after more than 15 years, renowned conductor/pianist Daniel Barenboim and pianist Martha Argerich come together on the new recording Piano Duos, on Deutsche Grammophon. Released on Barenboim's new digital label, Peral Music, the album has hit #1 on the iTunes Pop Charts in Argentina and #1 on iTunes Classical Chart in Argentina, Brazil, Switzerland, and Italy. Barenboim and Argerich have a long-standing friendship that dates back to when they were children growing up in Buenos Aires and performing at the home of Ernesto Rosenthal, which was the local haven for chamber music nights. Soon they went their separate ways and focused on their careers which included reuniting in the 1980s while Barenboim was music director of the Orchestre de Paris. Now, the duo pairs up again for this live recording which took place at Berlin's Philharmonie this past April.  A magical moment in the history of classical music, Piano Duos captures the highly anticipated and well-received reunion, with the music of Mozart, Schubert and Stravinsky.