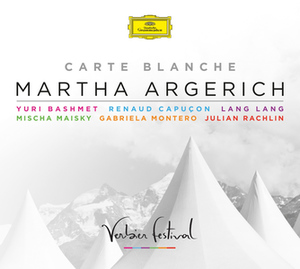 Recorded live at the 2007 Verbier Festival, this very special evening took place when the Festival gave pianist Martha Argerich carte blanche to program any repertoire and with any colleagues she desired.  The result was a special evening of music-making with an eclectic cast of friends and colleagues.  Amidst all the chamber music, Argerich also performs Schumann's Kinderszenenin a rare solo moment.