Mary Gauthier was born in New Orleans, Louisiana. Born to a mother she never knew and left in St Vincent's Women and Infants Asylum, Gauthier was adopted when she was a year old by an Italian Catholic couple from Thibodaux, Louisiana. Struggling to deal with being adopted, she used drugs and alcohol. At age 15, she ran away from home, and spent the next several years in drug rehabilitation, halfway houses, and living with friends; she spent her 18th birthday in a jail cell. These experiences provided fodder for her songwriting later on. Spurred on by friends, she enrolled at Louisiana State University as a philosophy major, dropping out during her senior year. After attending the Cambridge School of Culinary Arts, she opened a Cajun restaurant in Boston's Back Bay neighborhood, Dixie Kitchen (also the title of her first album). Mary ran, and cooked at, the restaurant for eleven years. She was arrested for drunk driving opening night, July 12, 1990, and has been sober ever since. After achieving sobriety, she was driven to dedicate herself full-time to songwriting, and embarked upon a career in music. She wrote her first song at age 35.

She sold her share in the restaurant to finance her second album, Drag Queens in Limousines, in 1998. The summer of the release of this album, she was invited to play 11 major folk festivals, including the Newport Folk Festival. Drag Queens in Limousines won in The 1st Annual Independent Music Awards for Folk/Singer-Songwriter Song, and she was nominated for Best New Artist of the year by the Boston Music Awards. She was nominated for three Gay and Lesbian American Music Awards (GLAMA) and won best country artist of the year. In 2002 her third album, Filth and Fire, was named "Best Indy CD of the year" by Jon Pareles of The New York Times. She moved to Nashville, Tennessee in 2001 and secured a publishing deal with Harlan Howard Songs, then secured a record deal with Lost Highway, a division of Universal Music, in 2003. Her first major label release, in 2005, Mercy Now was on the top 10 list for the year in dozens of publications, including The New York Times, the Los Angeles Times, the Daily News, and Billboard Magazine.

She was awarded "New Artist of the Year" by The Americana Music Association the same year. Mercy Now was voted the No. 6 Record of the Decade by No Depression magazine. Her second Lost Highway release, Between Daylight and Dark, appeared in September 2007. She has had her songs recorded by numerous artists, including Jimmy Buffett, Tim McGraw, Blake Shelton, Bobby Bare, Bill Chambers, Mike Farris and Candi Staton, Amy Helm and Bettye Lavette . Mike Farris and Bettye Lavette (Worthy, By Mary Gauthier and Beth Nielsen Chapman 2016 Best Blues Record) both received Grammy Nominations, and Mike Farris took home the 2015 Grammy for Best Roots Gospel Album, which included Mary's song Mercy Now.

Her songs have been used in several TV shows, including Nashville on ABC, Masterpiece Theatre's Case Histories, Showtime's Banshee, HBO's Injustice and Paramount Network's Yellowstone. Her 6th studio record The Foundling and was released by Razor & Tie Records in 2010, and was named the No. 3 Record of the Year by Los Angeles Times music writer Randy Lewis. In 2013, she released a Live CD called LIVE at Blue Rock, recorded outside of Austin, TX. Her newest release, released in 2014, is called "Trouble and Love". She was nominated in 2015 for the GLAAD Outstanding Music Artist of the Year at the 26th Annual GLAAD Media Awards, held in L.A. Additionally, Cold and Bitter Tears: The Songs of Ted Hawkins, released in late 2015 on Austin-based Eight 30 Records, features Gauthier's take on the late Los Angeles busker's signature song "Sorry You're Sick."

Rifles & Rosary Beads, her most recent record, called "music that's just plain important" by The Los Angeles Times earned Gauthier her first Grammy nomination in the category of Best Folk Album, and was nominated for 2018 Record of the year by the Americana Music Association. Mary was also nominated as the 2018 International artist of the year by the UK Americana Music Association.

Her short stories have been published in several books and magazines, including the book Amplified, released by Random House, and The Blue Rock Review, an arts magazine out of Wimberly, TX., and the Capitola Review. She has been featured with her own chapter in several books on country and americana music, including "They Came To Nashville", by Marshall Chapman, and "Right By Her Roots" in Americana Women and Their Songs, by Jewly Height, and a Dutch book on country music De Bezem Door Nashville, by Harry de Jong, with photographs by Henk Bleeker. Her songs are taught at several universities, including Alice Randall's country music lyric in American literature class at Vanderbilt University. Her songs have appeared on Wally Lamb's playlist, Tom Waits's playlist, and Bob Dylan's playlist. She is currently writing a book about the Art of Songwriting. She has made several appearances on the Grand Ole Opry, and currently resides in Nashville, Tennessee.

Between Daylight and Dark 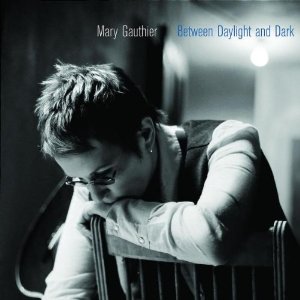 In the case of Mary Gauthier, four words are worth a thousand pictures. Between Daylight and Dark, her new Lost Highway album, finds her aiming her compass at the sky and searching for home. It is from this longing for home that this group of songs has emerged, and they fill Gauthier's new album with both hope and anguish, with faith as well as fear. The result is reflected in the music, starting as a trickle of songs almost from the moment of her sobriety and swelling into the stream that fed her first two self-released albums (Dixie Kitchen, Drag Queens in Limousines), an indie-label release (Filth and Fire), and her stunning Lost Highway debut (Mercy Now).

Between Daylight and Dark
http://www.marygauthier.com/