Michael Shapiro's works have been performed throughout the United States, Canada, and Europe-with broadcasts of premieres on National Public Radio, the Canadian Broadcasting Corporation, the Israel Broadcasting Authority, Sender Freies Berlin, WQXR, and WCBS-TV. His music, which spans across all media, has been characterized in a New York Times review as "possessing a rare melodic gift." His oeuvre includes more than 100 works for solo voice, piano, chamber ensembles, chorus, orchestra, as well as for opera, film, and television, with recordings on Naxos and Paumanok Records.

Michael Shapiro guest conducts internationally and is Laureate Conductor of The Chappaqua Orchestra in New York's Westchester County, which he conducted for the world premiere of his score for the classic 1931 film Frankenstein (directed by James Whale and starring Boris Karloff and Colin Clive) (since its premiere the work has received over 40 productions internationally), as well as for the world premiere of his own orchestral work, Roller Coaster, which received its West Coast premiere under the baton of Marin Alsop at the Cabrillo Festival of Contemporary Music while Shapiro was a composer in residence. He served for two years as the music consultant to the United States Holocaust Memorial Museum in Washington, D.C., where he produced and performed music by a number of composers who were either murdered by the Germans and their collaborators or had survived as refugees from the Third Reich. He has also been the assistant conductor at the Zurich Opera Studio.

The son of a Klezmer band clarinetist, Michael Shapiro was born in Brooklyn, New York, and spent most of his high school years in Baldwin, a Long Island suburb, where he was a music student of Consuelo Elsa Clark, William Zurcher, and Rudolf Bosakowski. The winner of several piano competitions during his youth, he earned his B.A. at Columbia College, Columbia University, where he majored in English literature and concentrated in music, benefiting most-according to his own assessment-from some of the department's stellar musicology faculty, which, at that time, included such international luminaries as Paul Henry Lang, Denis Stevens, Joel Newman, and others. He studied conducting independently with Carl Bamberger at the Mannes College of Music in New York and later with Harold Farberman at Bard College. At The Juilliard School, where he earned his master's degree, he studied solf?ge and score reading with the renowned Mme. Ren?e Longy-known to generations of Juilliard students as "the infamous madame of dictation" for her rigorous demands and classic pedagogic methods-and composition with Vincent Persichetti. His most influential composition teacher, however, was Elie Siegmeister, with whom Shapiro studied privately.

Second Sonata For Violin And Piano 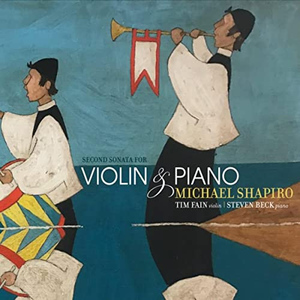 With his adventuresome spirit and vast musical gifts, violinist Tim Fain has emerged as a mesmerizing presence on the music scene. The "charismatic violinist with a matinee idol profile, strong musical instincts, and first rate chops" (Boston Globe), was seen on screen and heard on the Grammy nominated soundtrack to the film Black Swan, can be heard on the soundtrack to Moonlight and gave "voice" to the violin of the lead actor in the hit film 12 Years a Slave, as he did with Richard Gere's violin in the film Bee Season. Fain captured the Avery Fisher Career Grant and launched his career with Young Concert Artists.

Second Sonata For Violin And Piano